While we know that some forms of exercise are great for building bone, we could still use more research on strategies to keep our bones healthy as we age. A recent study in the Journal of Strength and Conditioning Research tackled that question, specifically for women.

Resistance training is known to benefit bone health. The forces required to move heavy weights without collapsing encourage the activity of osteoblasts, the type of cells that make up bone. In fact, while impact exercise is generally considered superior to resistance training for building bone, the latter seems to better able target more of your bone. However, high acceleration of the weights is important for this goal.

In the Journal study, the researchers hypothesized that prevention was the best strategy for maintaining healthy bones. Since bone mineralization peaks in your twenties, they suspected that this is the best time to work at maximizing bone health to prevent problems later on. Since women are at higher risk for bone problems, the participants of the study were all young women in their early twenties.

The researchers focused on maximal strength training, paying special attention to how it might affect the spine and hips. Maximal strength training requires high loads and relatively high acceleration, making it a solid candidate for bone development. Because of these goals, the researchers used the hack squat for the test. The hack squat is a quick and short exercise working with heavy, whole-body loads.

The participants did the hack squat three times per week. Each workout included a warm up and four sets of three to five reps at 85%-90% of their one-rep-max. The participants focused on accelerating during the concentric phase. The loads used were evaluated in every session to ensure they were progressing steadily. The program was performed for twelve weeks – a rather short time frame – to see if it would be beneficial.

After the program, the mineral density of the spine increased by 2.2% and the hip increased by 1%, which were pretty good gains. These improvements were accompanied by a doubling of their hack squat one-rep-max, and nearly as much of an improvement in acceleration. 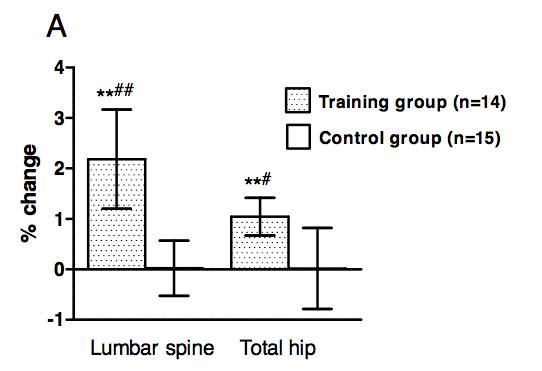 The women in this study had not trained extensively in lower-body exercises prior to this program. As a result, it’s not possible to say if these results would continue, especially at this pace. With bone, there may well be a beginner’s gains effect, just like we saw with the huge strength improvement. That said, since they were able to use much heavier weights by the end, their potential to encourage new bone development might actually have increased.

While we still don’t know if this is the best strategy, we do know that it’s effective. As with most things, it seems that prevention is the best medicine when it comes to bone health. Spend some time with heavy weights and fast reps to keep your bones healthy.