You Are Not a Bodybuilder (So Don’t Train Like One)

What type of training modality is best for athletes? We all move the iron now, but how we do it is the new minefield.

In the health and fitness world today, weight training is accepted by all. This was not always true. Many of us old-timers had to continually justify our use of the iron. We all remember telling everybody working out with weights would not make you musclebound, whatever that means. But happily, over time all of that early prejudice against the iron was put to rest. Now weight training is practiced by nearly everyone with any connection to the sport and fitness world.

Today the battle has shifted to what type of training modality is best for athletes. We all move the iron now, but how we do it is the new minefield.

A Misdirected Approach to Strength Training

To illustrate, I can remember a young man who came to me some years ago wanting me to critique his football strength training program. His routine called for workouts three times a week. Fine so far. But in each day’s workout I was struck by the large number of exercises he programmed. He had planned to do ten exercises per day. Perhaps it was because he liked a round number – who knows.

The only multi-joint exercise was squats. I asked how deep he went. As expected, he said he never went below parallel because, you guessed it, the football coach told him that was bad for the knees. I then asked him to demonstrate his parallel squat. As expected, he went down to a point where the hamstrings were parallel to the floor, not the quads, so he didn’t even do a real parallel squat, let alone an ass-to-grass squat.

I asked about the reps and sets and I found out it was the usual eight to twelve reps, three sets for every exercise. I gave myself a knowing nod and continued my interrogation.

I then asked him where he might’ve gotten this workout, although I had a pretty good idea. It either came from a bodybuilding magazine or one of the many books on the market instructing us in so-called “strength training.” I check out the bookstores occasionally to see what they are stocking in regard to training. There are many books about bodybuilding that generally recommend the usual eight-to-twelve reps, three-sets routines. Those are fine if bodybuilding is your legitimate goal. But I look at some of the other offerings aimed at general fitness or more specific strength training and you often see the very same “8-12×3” for those routines, as well. They all seem convinced that bodybuilding is strength training. It was easy to see how my friend had come upon his ignorance.

So I asked my friend what the name of his sport was and he answered, “Football, of course.” I then replied, “Yes indeed, so why is most of your routine directed to upper body work?” After some discussion, we determined he never questioned the inclusion of exercises. He was simply following someone else’s bodybuilding routine.

He must have assumed all those upper body exercises might help him with tackling and other areas where the arms are used. However, he completely underestimated or even ignored the need for strong legs in football. This young fellow was a defensive tackle, so I reminded him that his ability to get off the line quickly and explode through the O-line would be vital to his future success. At this point he was beginning to see the logic of my advice, although I don’t imagine he was looking forward to more time under the squat rack. 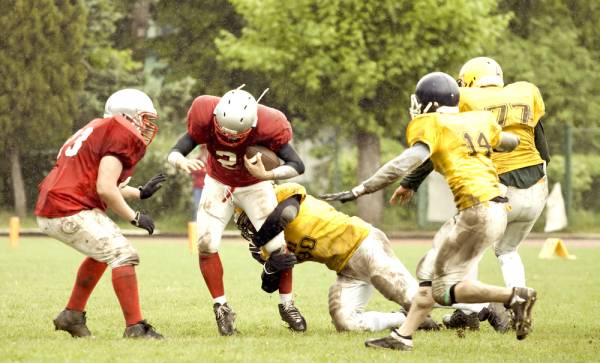 I also addressed his number of exercises. Ten exercises is fine for a bodybuilder who has to divide his body up into umpteen parts and train each one separately. But football players – and most other athletes, for that matter – need to work the body as a whole. He had not thought of this factor. He assumed training was training and as long as every muscle gets a workout you are ahead of the game. He did not realize that just as a football player uses his whole body on the field, so must his weight training modality use integrated exercises.

Now we junked most of the little bodybuilding exercises and replaced them with fewer but more challenging full-body exercises. Out went the flys, bis, and tris. In went the squats and deads. (As you might guess, he was thankful the benches remained.) I explained the new routine would give a lineman’s body more work than half a dozen isolation exercises. And as a bonus, there would be a lot less time spent in the gym, time that could be spent practicing his more football-specific skills. Further, as a scholastic football player who had to maintain his eligibility, this extra time could be used to help his grade point average.

This is not to say that isolation exercises are totally useless. Certainly they are necessary in bodybuilding if that is your passion. But they also have their place even in athletic training regimens.

They are especially useful in two cases:

Rehab work – When a body part is injured, the isolating nature of such movements becomes their great virtue. The isolation factor can be used to screen out the effects of continued training on the injured body part. This allows some form of training for the injured athlete and can allow some degree of maintenance of strength during the recovery. It is also important for the athlete’s morale to see that he or she can still train through the recovery process.

Remedial usage – Some are now calling this “pre-habilitation.” Many trainees, especially younger ones who have had some amount of weight training already, may find that their bodies are unevenly developed. This is especially true with junior varsity football players. They may have done some weight training in high school, but as with my friend, it was probably heavily weighted towards upper body exercises. In college they then have to be given remedial leg work. Female athletes are often in the opposite camp. Their upper bodies need some extra work to get up to par with their lower bodies. Whichever way an athlete’s imbalance works, it is desirable to even out the body in order to eliminate weaknesses and prevent injuries.

So, whether it’s for prehab or rehab, isolation movements have their place. It’s just that they are not at the top of the list when it comes to strength development for athletes. Athletes need full-body movements that can mimic the full-body movements used in sport. As I told my friend, improved performance in his sport is the ultimate goal, not aesthetics. The aesthetics will look after themselves.