Have you ever worked out how much per second all those shiny new bike bits actually cost?

A few weeks ago I entered a classic bike event and as part of the preparation I took a 1950s steel-framed racing bike down to my local club time trial for a test run. It was the most comfortable time trial I had ever completed thanks to the leather seat and 27-inch wheels and tires that just soaked up the bumps.

And, I was pleasantly surprised at the result. There was only a few minutes difference between my time on this old bike and a much more modern one.

This led me to conduct a little experiment – to try an old road bike, a new road bike, and a modern time trial bike on the same course (our local ten mile).

My steel bike I used in the classic bike event.

While my “study” would not stand up to a rigorous statistical analysis, being a sample of one rider on different days, a quick Internet search revealed that my results do not seem to be wildly out from other people who have tried something similar.

“The gains are most likely due to an improved aerodynamic position on the bike and a small gain in reduced weight.”

Our local course has some twists, turns, and a few junctions, so I would expect the performance difference might be more noticeable on a flat straight course. However, that three and a half minutes between the old steel bike and the modern carbon time trial bike does come at considerable cost. The gains are most likely due to an improved aerodynamic position on the bike and a small gain in reduced weight.

If you do not wish to spend a fortune on a fancy new bike to gain those seconds, there are some other strategies you can employ.

1. Tackle Your Position on the Bike

The largest object creating air resistance is you, a rather blunt object moving through the air. All bicycles look thin from the front, so tinkering with various bike parts is really secondary.

Obtaining a more streamlined position on the bike by lowering the handlebars and allowing your upper body to be a bit flatter will reduce your profile and create less air resistance. You have probably spent a long time in your current riding position and your body will have grown accustomed to sequencing the muscles in this position over the appropriate ranges. Thus, a new position will bring its challenges.

“As your muscles will be moving over a slightly different range, you may not have quite the same power as before, so grow accustomed to these small changes by riding your bike often.”

You may not have the flexibility to adopt a more aggressive position at first, so make small changes. As your muscles will be moving over a slightly different range, you may not have quite the same power as before, so grow accustomed to these small changes by riding your bike often. Initially, you may notice your hamstrings and neck are affected most as you lean forward more and need to look up and forward. Riding on the drops often (rather than the hoods or top of the handlebars) will help you acquire this position and encourage your muscles to change their end-of-range positions.

This video below demonstrates one of my favorite stretches, as it involves leaning forward similar to a cycle position and avoids falling into the trap of reaching for the floor and curving the lower back.

An increase in average power from 230 watts to 260 during that ten-mile time trial will gain you about 1 minute 20 seconds, according to a table by endurance expert Joe Friel. While a gain of thirty watts over 230 may sound like a big change, with some dedicated training it is possible. I have known clients who went from just over 200 watts to nearly 270 in six months of focused training. That’s the equivalent to a three-minute gain in ten miles.

To develop your power effectively, you do need to work hard. It will not come by doing a bit of cycling here and there. Hill climbs or intervals on the turbo trainer are just the thing for this. Combine them with some slower endurance rides (in your new position) and your training will encourage the adaptation that is required.

If you need ideas for training plans, I have created one each for beginner cyclists, intermediate level, and those seeking the advanced level.

3. Invest in Some Modest Equipment Changes

Flapping clothes will act like a parachute and slow you down a significant amount. Instead, snug-fitting jerseys and shorts will reduce air resistance.

“Your ability to sustain a higher speed will depend upon your comfort level. An uncomfortable position where you have to keep sitting up will slow you down and you will be unlikely to be any faster than before.”

A smooth helmet with a visor will also assist the airflow over your head as it meets the air and allow you to ride faster. This does not have to be the classic teardrop time trial helmet, which probably looks a bit out of place on your Sunday group ride. Several modern styles with a smoother shape are available, and also allow for ventilation. The visor will help avoid getting dirt and grit into your eyes, too. Believe me, a large insect in the eye at even a modest speed really hurts.

After that, some inexpensive tri-bars are all you need to bring your elbows in towards the center of the bike and close the cup-shaped air scoop formed by your body leaning forward. 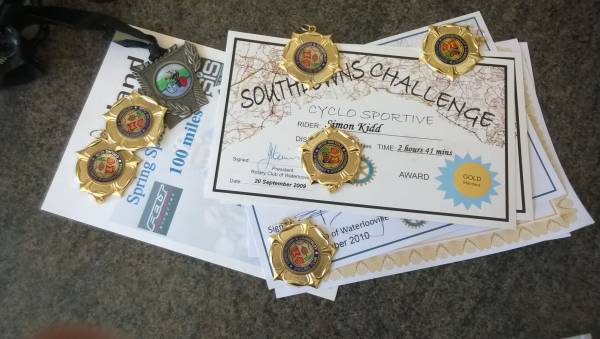 Medals won on my steel bike.

4. Get Really Comfortable and Have Fun

Your ability to sustain a higher speed will depend upon your comfort level. An uncomfortable position where you have to keep sitting up will slow you down and you will be unlikely to be any faster than before.

So, take time to work not only on developing power, but also working on your more aerodynamic body position and improved ranges of motion. If you can relax into your new position, you will go faster – and faster for longer.

If, having done all this, you still find you are always fourth and are desperate for that club trophy or you calculate that securing a coveted sponsorship deal is worth buying your way a few extra places up the rankings, then I am sure your local bike shop will be pleased to hear from you.

New toys can be such fun. However, the satisfaction of working hard to develop your power and position with an older machine and getting a good result can be considerable and come with well-earned bragging rights.