5 Reasons to Eat Berries Every Day

Here are five reasons why berries will both prolong your healthy life and get you back in the gym more quickly.

Summer is right around the corner – although here in Los Angeles, it feels like it’s been here for a couple weeks already – and that means berries. Berries are some of nature’s most powerful disease-fighting and performance-boosting foods and spring is their peak season.

Here are five reasons why berries are some of the best foods to add into your diet, to both prolong your healthy life and to get you back in the gym more quickly.

One of they keys to healthy eating is focusing on nutritional density, and berries are the most nutritionally-dense fruits out there, loaded with antioxidants such as flavonoids and antioxidant vitamins. Which berries rank at the top of the antioxidant density chart, among those we can actually buy at the store? Blackberries rank well ahead of raspberries, blueberries, and strawberries in terms of antioxidant bang for caloric buck.1

Large Amounts May Prevent or Reverse Physical and Mental Decline

Blueberries in particular have been shown to prevent motor decline in aged animals and improve memory in older adults.2,3 So if occasionally you’re feeling uncoordinated or forgetful, then commit to loading up on berries every day. You may want to put up a sign on your refrigerator at least in the beginning to help you remember, though.

In a 2011 study, consuming just one serving of blueberries a week decreased the risk of hypertension by 10%. And findings in the Nurses’ Health Study published in 2013 suggested that women eating three or more servings of blueberries or strawberries per week was linked to a 34% reduced risk of heart attack compared to a lower intakes of berries.4

How is this possible? Scientists found that in addition to the ability of berry flavonoids to combat oxidative stress, they also prevent the production of atherosclerotic plaque by decreasing oxidation of LDL and they increase antioxidant capacity in the blood. In addition, berries have several anti-inflammatory properties, and higher berry intake is associated with reduced C-reactive protein, which is a good determinant of overall inflammation in the body.5

Berries Have Special Benefits for Athletes

Ever woken up the day or two after an intense workout and been so sore that it became difficult and painful to do just about anything? Even getting in and out of a chair? That’s what physicians and scientists call delayed onset muscle soreness (DOMS) and they think it’s due to inflammation created by tons of micro-tears in our muscles.6 And one of the best ways to reduce DOMS is by consuming loads of berries. A controlled study done on endurance athletes suggested that daily blueberry consumption significantly reduced oxidative stress and inflammation compared to a control group.7 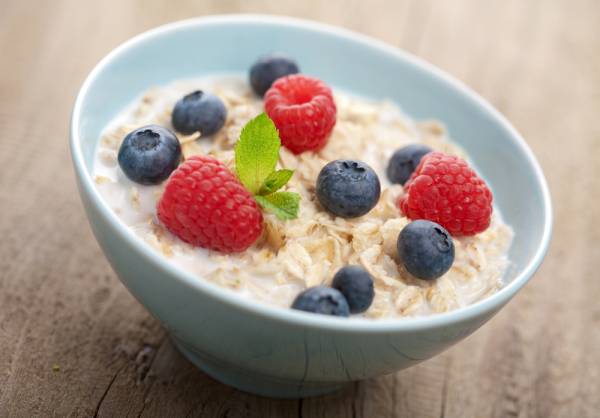 It’s pretty obvious we can benefit from adding a ton of berries to our diets, and the nice thing is they’re not a difficult food to eat. We can add more berries on top of our morning oatmeal or add frozen berries to our overnight oatmeal. We can also add them into a post-workout or morning smoothie. We can mix them in with a frozen banana in a blender to make a delicious ice cream, sprinkle them on salads (strawberries work nicely with a good balsamic dressing), or just eat them by themselves. On hot days, eating frozen berries directly out of the bag is a great option, too. However you choose to do it, make it a point to eat loads of berries every day.

6. Smith LL. “Acute inflammation: the underlying mechanism in delayed onset muscle soreness?” Medicine and Science in Sports and Exercise. 1991, May.