Adventure Racing, Obstacle Course Racing, and Triathlons – Where Does It Stop?

The adventure and obstacle-racing phenomenon is without question one of the shining and rising stars in fitness in recent years. What’s behind this popularity?

“I have fought the good fight. I have finished the race. I have kept the faith.” – The Bible

Unless you’ve been living under a rock, you’ve seen your fair share of races popping up in your community. Tough Mudders, Spartan Races, Rock ‘n’ Roll Marathons, you name it. It seems there is an event for every imaginable concept. As America gets fatter, the irony is we also get fitter. Though there is a substantial overweight and sedentary population in our country, there is also a sizable fit and even über-fit one as well. And as people get in better shape they are in search of something more. Another ten minutes on the treadmill or five pounds off the scale doesn’t seem quite sufficient after you’ve been working out or running for a while. At some point people start to see what they can do and to compete – with themselves, against others, with the clock, and against Father Time.

Enter the race craze. It seems no facet of fitness is immune. There are CrossFit events, races up mountains and down, races for cures, and there is even a popular television show called The Amazing Race. Where I work, we’ve hopped on the bandwagon as well. Last week we put on an indoor “triathlon” that we called the Dri Tri. Now, I’ve done plenty of events before such as supported bike rides, fun runs, and relay races, but an indoor triathlon was new to me. Our version included a 2000m row on a water rower, 300 bodyweight reps in the weight room (burpees, squats, etc.), and a 5k run on the treadmill. People went nuts for it.

The adventure and obstacle-racing phenomenon is without question one of the shining and rising stars in fitness in recent years. Here in Colorado, you can run just about any race you can think of. You can run the steps at the various sports venues. You can go up to arguably the nation’s most famous concert venue, Red Rocks, and do fitness events there. There are races up the steps of tall buildings and races in and around every park in town, as well as every conceivable race up in the mountains. There’s even a race called The Running of the Bulls where race participants run a 1k, getting a head start running from the Denver roller derby team on skates. The roller derby gals, armed with Styrofoam bats and clubs, give chase to ‘gore’ runners trying to evade them.

You have to wonder where this craze will stop and what has brought all of this madness about. I remember years ago being captivated by watching the Eco-Challenge on the Discovery channel. Admittedly, I was sucked in to the drama of competition between teams that were racing up cliffs, down rivers, and through the woods on trails. The drama that unfolds on such television shows also unfolds for us in real life – setbacks, thrills, challenges, teamwork, victory, and defeat. Out there in nature and on those race trails we are looking for answers and finding meaning in our own journey. The question remains, why now, and why the popularity of racing adventure, obstacle, or otherwise? 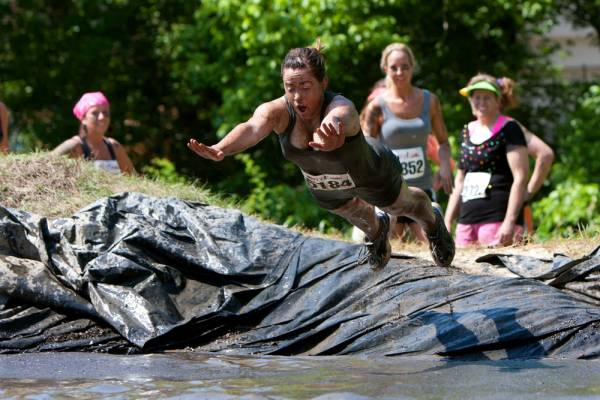 It seems that races get us back in touch with ourselves while modern life is designed to do quite the opposite – to distract. Distractions also keep us from facing what it is that helps us move forward – fear. That said, races in and of themselves by their physical nature are metaphorical. The real work is to do the mental and spiritual work behind the physical, but that’s a different article. On the subject of facing fears, it appears that Spartan Race co-founder Richard Lee concurs. “It’s all about facing your fears and having fun at the same time. Most people have never been covered in mud, jumped in a river, or climbed a high wall, but it gives you a great sense of accomplishment.”

While the trend of racing continues to gain in popularity, racing in any sense is not a new concept. People like to compete and have run races since the beginning of time. A marathon is still just a run that is 26.2 miles as it was centuries ago, but now that rock ‘n’ roll is involved, people seem to have lost their minds for it. For 31 years now in Oregon, where I hail from originally, the state has hosted one of the largest and longest (200 miles) relay races in the world, the Hood to Coast Relay. Nowadays there are waiting lists just to enter a team in the race and over 18,000 people participate each year. People have always raced and will always continue to do so, but one thing is certain – we are living in peak race times.

It seems that people are increasingly out of the box when it comes to being active. It makes sense given that we are no longer satisfied with things that used to entertain us. Running on the treadmill just doesn’t cut it anymore. Treadmills now come equipped with a dock for your smart phone, Internet connections, and televisions built it. If you’ve spent any time around a seven year old lately, you’ll be hard pressed to find one that doesn’t speak iPad or have her hands attached to some sort of device. We see the same trends in sport and fitness. We want to be entertained and yet challenged at the same time. Perhaps racing represents this intersection and blend between two seemingly opposing concepts of fun and fit. 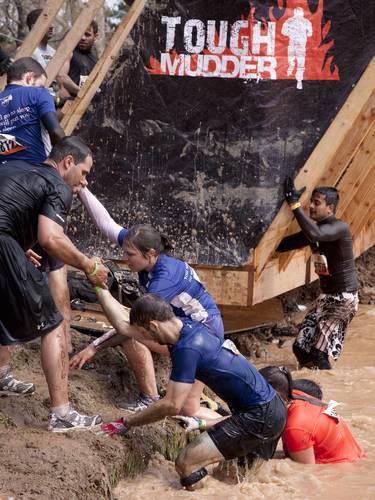 We as a society might well be suffering from some sort of collective attention deficit disorder, and these events are merely another example of the myriad of distractions at our disposal. Still, distracting or not, when it comes down to it, these events are a good thing. A race brings people together and builds community in a shared common goal of accomplishing something. Some compete to win, others compete with themselves, and others are just seeing if they can finish. Regardless, such events get people to focus on goals, better themselves, and stay fit. In short, races provide inspiration.

That said, inspirational or not, some of this stuff seems downright silly – freezing cold water, barbed wire, and electric shocks? I’ve thought about calling these race organizers up to offer my services of lacing up my gloves to punch people in the stomach as they cross the finish line. I mean, what’s the difference between a punch and a shock, and what’s the point, for that matter? Races I’m for, but some stuff seems more like outright stupidity than “tough.” My dad used to say, “You don’t have to fall off of a log to know what it is like to fall off a log.” I don’t need ice cold water or electrical shocks on my run thank you, but then again, I am a guy who’s taken plenty of punches over the years and many people find that towards the top of the list when it comes to stupidity. I guess we all have our thing.

In the end, I suppose all of us are trying to prove our worth and challenge ourselves to see what we can be. These events are part play, part competition, and part therapy. Each one of us longs to be a kid again sometimes, and running a race is a way for us to connect to our inner child. Running a race is also a way for us to prove ourselves right (or others wrong). As to the therapy, when we run the race, we do so to find our more about ourselves. To see if we have what it takes, to try, to compete, to win, to finish, or face defeat. I’m not sure what all of this madness is about, but at some point we all have to run the race to know that we can.