I recently became friends with an avid rock climber and decided to give it a go myself - both in the gym and doing the real thing. I discovered I loved it for many of the same reason I love boxing.

I recently got to know someone who is an avid rock climber. Go figure – I live in Colorado. I’ve done a little rock climbing (twice, that is). Once, officially, with my brother Scott, who had been an avid climber in college. Once, unofficially, with my best friend Jeff who, after we had a few too many beers, decided we would climb a forty-foot rock face while camping. Thankfully, I survived both ordeals, although I learned a valuable lesson while half way up the latter rock face. It’s not a good idea to climb while intoxicated and without proper and safe support!

Climbing is perhaps life’s most primitive and gratifying sport, save maybe running. It’s a simple concept. Pick something and climb to the top of it. We are born to do it, both literally and figuratively speaking. When I was two, I climbed up onto the roof of our family home and waved down to my mother in the kitchen through the skylight. I survived that ordeal as well, although my mother just barely survived her shock. Surprisingly though, despite my early enthusiasm, I was only an avid climber up until about age five. It seemed I was destined for activities and adventures closer to the ground.

Recently though, through meeting my new friend, I found my way into a rock climbing gym for the first time and then outside to do the real thing. The climbing gym has its own culture, just like any gym. Now I’ve been around boxing gyms, martial arts studios, and fitness culture a bunch, but I’ve never spent any time in a rock gym.

What I liked is that the common interest of the people involved (climbing stuff) creates a focused environment based on one of life’s most critical elements (trust). I also like that it’s a pretty mellow and chill environment. Climbers like to climb, they don’t pose in front of mirrors. I have seen a similar dynamic at martial arts studios, in that throwing punches and kicks can be high stakes, and doing so also optimally and hopefully creates a vibe of respect.

But the rock climbing culture is a unique one and somewhat different than any other gym vibe, martial arts included. It’s a little more laid back at the climbing gym. A little more fleeces and beards. Somewhere perhaps between the yoga vibe and the boxing gym. However, like the boxing gym, there is a focused energy. I’ve learned that when the bell rings at the boxing gym, you better be 100% present and on top of your game or you’re going to get your own bell rung. At the rock gym, once you are on that wall or belaying someone on the wall, you better be totally on top of it, or you’ve got big problems.

In a nutshell, climbing at the rock gym is ultimately preparation for the real thing in the same way that sparring and drilling is preparation for a fight. It’s also much safer. With sixteen-ounce gloves and headgear you probably aren’t going to get too badly hurt. At the rock gym, they have huge foam mats and the walls only go so high. Don’t get me wrong, people still get knocked out at the boxing gym, with or without headgear, and I am sure people fall and accidents happen at the rock gym. Still, it isn’t quite the real thing. It’s practice for it. (As an aside, it’s interesting to note that in German the word gymnasium refers to a school, or a place of practice and education.) 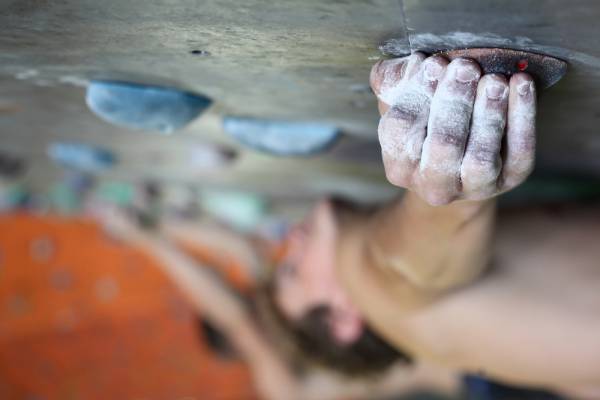 In a word, what I experienced at the climbing gym was humility. It started easy enough. I got outfitted, learned my figure-eight knots, and then I started climbing stuff. At first, I just muscled myself up those walls. Grab onto to something, and then hoist myself up. That worked for the first few routes, which were rated 5.8 and 5.9 according to the Yosemite Decimal System.

Then I tried a 5.10. The willpower method didn’t work so well as the routes got tougher. I simply couldn’t out-muscle the wall. As things got more difficult, I got increasingly fatigued, as well as a little fearful. Then I fell for the first time. Even though the rope caught me, it was still pretty darn unnerving. Then I fell again. And again. My heart rate elevated and my adrenaline kicked in just like it would in the ring if I were getting my butt kicked. Everything hurt. I made it to the top, but only after falling several times. I came off of that wall feeling both accomplished and humbled.

Climbing challenges us to the core – it narrows our focus, it has a competitive element and thrill factor, and it involves real teamwork. Also, like any athletic endeavor, when done correctly it’s done with grace, beauty, and a sense of effortlessness. My friend can climb with such unforced ease. Watching her is like watching a dancer. It reminded me of watching the Cirque Du Solei – the perfect blend of athleticism and artistry. Like the martial arts, real climbing is almost of a blend between the two. But before the grace and beauty happens, there is a primal fear to contend with as the stakes are real and they are high.

I saw a guy the other day wearing a Ray ‘Boom Boom’ Mancini shirt and it reminded me of the fear that fighting creates. As people in the fight world know, Mancini killed a guy in the ring. It’s rare, but it can and does occasionally happen. In a pro fight, anything can happen and a fighter knows that going in to the ring or the octagon. Yet, still they do it because they are called to. Rock climbers know the same thing. It’s rare that climbers fall, but it does happen. If you’re on a 150-foot sheer face, anything can happen out there. You have to prepare, and you need to have 100% complete trust in yourself, your partner, and your equipment. That’s a lot of trust.

After preparing at the rock gym, my friend took me out to climb the real thing. Rifle Canyon in Colorado is a climbing mecca and is also a pretty spectacular sight. It felt like I was on the set of some Western movie. After snapping a few photos of the scenery, I was up first to belay, putting the life of my friend in my hands as she went up her route. Then, of course, it was my turn. Climbing out there felt like visiting some foreign country where I didn’t know where to go or how to get anywhere. I had a rope, harness, and someone to catch me if I fell, but still, I felt paralyzed. I held on to that rock for dear life. I knew the only way up was to breathe and face my tension, fear, and adrenaline. It’s not really us versus the other guy, or us versus the rock. It’s us versus us. I have learned that lesson so many times in the martial arts, and in Rifle, I learned it again. Just like at the rock gym, I made it to the top of my routes, but not before having to learn to be present and humble in the process.

I like climbing because of its parallels to real life in the same way I am drawn to boxing and the martial arts for the lessons you can learn. Answers come from having the courage to fail and being willing to climb tough obstacles. In life, you take hits. It ain’t all offense. In climbing, you fall. If we can learn to fall and find the resolve to keep climbing, or if we can learn to take hits and figure out how to keep fighting, we can learn a lot about ourselves and what it is to be human.