I’m currently preparing for my third-degree black belt in aikido. I was discussing an article about test preparation with Becca, the managing editor here at Breaking Muscle, when she noted that a lot of people might not know what aikido is or how it differs from other martial arts. This article is an attempt to answer that question.

I’m currently preparing for my third-degree black belt in aikido. I was discussing an article about test preparation with Becca, the managing editor here at Breaking Muscle, when she noted that a lot of people might not know what aikido is or how it differs from other martial arts. This article is an attempt to answer that question.

Aikido is a Japanese martial art, developed in the 1920s and 1930s by Morihei Ueshiba (1883-1969). Its roots lie in classical Japanese jujutsu and sword styles. Like judo, a close cousin, aikido depends on balance and timing rather than striking. Ueshiba was one of the greatest martial artists of his time. There are many stories of people who came, expecting to expose him as a charlatan, and ended up becoming his students. He was also a mystic who was deeply affected by the disastrous consequences of World War II.

This is Morihei Ueshiba in 1935, very early in the evolution of the art that became known as aikido.

After the war, the emphasis of aikido shifted. Not simply a martial art, it sought to become a means to bring humanity into harmony with the universe, a way to resolve conflict without fighting. The details of this shift are loudly debated in the aikido community. How much of the shift in emphasis reflected a real change in the art, as opposed to a practical decision in light of the American occupation of Japan?

Many classical martial arts treatises use mystical language to describe fairly mundane physical phenomena; have Ueshiba’s translators correctly understood the ideas he was trying to communicate? Ueshiba’s direct students have passed different interpretations of the art down to their students: which interpretation is “right?”

Without boring a general audience with these arguments, suffice it to say that the idea of aikido as a non-fighting martial art spread far and wide. It helped the art to attract many people who were not particularly interested in or knowledgeable about martial skills as traditionally understood. Meanwhile, the abilities of Ueshiba and his top students attracted many excellent practitioners of other arts.

Thanks to these somewhat contradictory trends, modern aikido practice is tremendously diverse, ranging from extremely physical, even destructive technique at one end of the spectrum to something akin to martially-inspired dance at the other. Anyone thinking of studying aikido should be aware that these variations exist and seek out a dojo that aligns with their particular interests.

Dojos, like mine, that lie in the middle ground tend to agree that physical conflict is best avoided. There is always someone bigger, stronger, or more skillful. Even less dangerous individuals can have friends nearby. Weapons dramatically raise the stakes, and their presence won’t necessarily be obvious.

Yet many attackers aren’t malicious so much as stupid, drunk, or mentally ill. For both ethical and practical reasons, when conflict is unavoidable it’s important to act decisively and dissipate any threat as quickly as possible, ideally without inflicting serious injury. 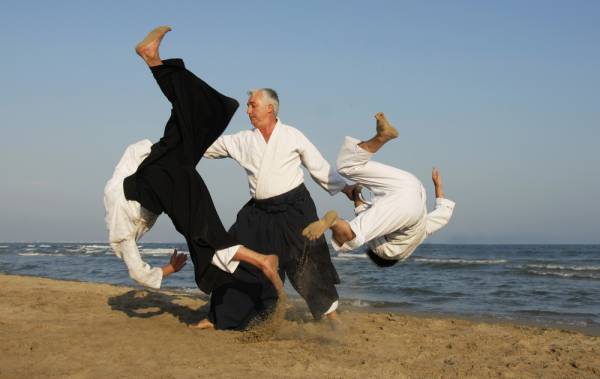 Most aikido techniques have both more and less damaging variations. The most graceful throws contain opportunities for devastating strikes and crippling joint dislocations. Often, an attacker may appear to “throw himself” because he chose to escape rather than face a more damaging outcome.

For this reason, aikido demonstrations can look fake. However, these less damaging options also make it possible to practice aikido at full speed, with full contact, without injury. Aikido practice is realistic enough to teach many skills that are helpful in real situations.

The first and most important of these are calm and awareness: the ability to perceive what is actually happening and respond as needed, without being paralyzed by indecision or fear. All martial arts seek to develop these qualities, of course.

However, aikido’s use of multiple attacker and weapons practice is somewhat unique. When an attacker has a weapon, the safest place to be is close to him, inside the reach of a long weapon like a sword or staff, close enough to restrict his ability to actually use a knife.

However, you can’t get there unless you’re willing to move decisively into and through the point of maximum danger. With multiple attackers, awareness allows you to place one in the path of the next, ensuring they get in each other’s way and can’t coordinate effectively.

While weapon taking and multiple attacker strategies are black-belt level skills in most aikido styles, these goals inform the practice from the very beginning, providing the rationale for many fundamental movements.

This is from a class, not a demonstration, so it goes more slowly and has good explanations of what’s going on. My teacher, George Ledyard, discusses control of space with three attackers.

Balance and timing are next on the list of aikido priorities. Most techniques work by disrupting the attacker’s posture and balance while maintaining your own. Doing this demands strong, stable posture and an ability to anticipate the moment when the attacker is in transition between one stable position and another.

Conversely, the attacker seeks to avoid or minimize disruptions of his posture, and to recover as quickly as possible when they occur. Out in the real world, these skills manifest as the ability to avoid tripping and falling, even on rough pavement or ice, and to avoid injury when falls do occur.

Any search for “real world aikido” will find plenty of stories; my favorite happened to a friend. His bicycle’s front wheel collapsed, sending him flying into a perfect roll over the handlebars. The wheel was a total loss, but he was fine. 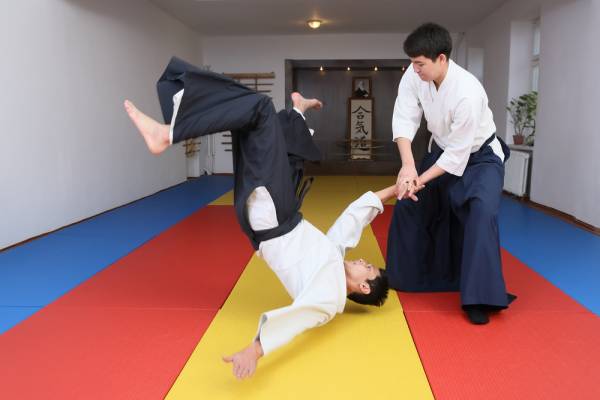 And finally, aikido depends on flexibility and core strength. Power in aikido tends to come from a wave action initiated by the legs and core. Tension in the lower body can keep this wave from developing in the first place, while tension in the upper body will block it before it can reach the other person. On the attacking side, flexibility is the key to avoiding injury, but also gives the sensitivity needed for successful counters and reversals.

On the other hand, most aikido dojos put little or no emphasis on ground fighting. If additional attackers may be nearby, the ground is a very dangerous place to be. Most aikido dojos are also philosophically opposed to competition.

One reason is that too much concern with “winning” can impede the development of good technique. It may be possible to overwhelm an opponent with superior strength, but doing so doesn’t teach you much about aikido.

Secondly, competitions necessarily have rules, which will tend to distort training priorities. For example, ability to tolerate physical punishment is very important for combat sports, but not particularly relevant once weapons are involved.

This introduction is necessarily brief. Please ask any questions in comments. I’ll try to address them here or in a future article.