Want to work on your cardio, but can’t bear the thought of getting on an elliptical machine in public? Here are three ways to get cardio and still look cool. Well, sweaty and crushed, but cool.

Cardio sucks. But it’s got to be done. Unless you’re competing as a heavyweight strength athlete and don’t care about excess blubber or you’re one of those genetic freaks with a metabolism so speedy it would make Usain Bolt look like a tranquilized sloth, cardio is a necessary evil.

Surprisingly, cardio helps with weight training. Granted, a squat session or a back workout isn’t exactly running a marathon and you won’t be gasping for air and dripping with sweat after each set, but you do need at least a base level of conditioning. If you’ve ever felt yourself flagging during a high volume deadlift session or have been convinced your heart is about to explode inside your chest when doing your accessory work, chances are your fitness isn’t where it needs to be.

Cardio helps with dropping weight too. No one can argue in regards to its ability to burn calories and speed up the fat loss process.

The trouble is, when people think of cardio they automatically think of treadmills, bikes, and steppers. The more adventurous among you may shout “prowler sprints” or “kettlebells,” but even those can get boring after a while. What we need is something a little more stimulating and definitely more macho. While cardio will never rival weight training in the alpha male stakes, it would be nice not to have to hand in your man card every time you go for a run.

Unfortunately, ultra manly cardio isn’t allowed in most gyms. While the rules at the local Planet Fitness may not specifically mention a ban on wrestling tigers or chasing down muggers as a way of getting your conditioning session in, I’m pretty sure they wouldn’t approve of it. Don’t despair, though. There are still plenty of ways you can get an awesome cardio session while sustaining your masculinity. So step away from the recumbent bike, put your leg warmers back in your gym bag, and prepare for the ultimate in alpha-male cardio. 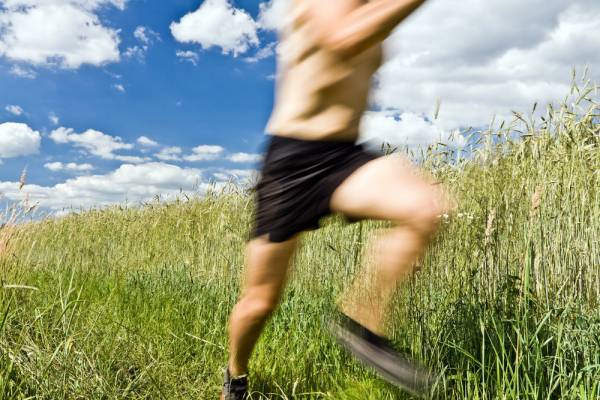 Although they’re far from a new concept, hill sprints are getting more and more popular, mainly due to the fact that if you’re not in tip-top condition you’ll get your butt handed to you. Even the fittest of guys will end up in a quivering, sobbing wreck, laid out on the floor in the fetal position after a hard session of hill sprints.

From a performance point of view, the benefits of hill sprints are numerous. Besides the obvious fitness and cardiovascular factor, hill sprints are generally less stressful on your joints than running on the flat, they increase calf, glute and hamstring activation, and lead to a more natural running stride.

To increase the “man factor,” do your hill sprints wearing a weighted vest or on sand if you’re lucky enough to live near a beach.

Set a timer for 5 minutes and grab a kettlebell (16kg works well to start with).

The aim is to do as many snatches as you can in the time limit. You can switch hands as many times as you like, but the catch is that you can’t put the bell down. Should you need a rest, you must hold it in the rack position. Any prolonged holding of the bell in another position or letting the bell touch the floor results in a void challenge.

If you know what burpees are and you know what a Tabata interval is, you’ll be cursing the fact you ever laid eyes on this article. For those of you not quite in the loop on either of these, here’s the lowdown:

Burpees are the ultimate man-maker. Start from a standing position, place your hands on the floor in front of you, kick your legs back so you’re in a push-up position, touch your chest to the floor, jump back in, then jump in the air. That’s one rep.

A Tabata is an exercise protocol, designed by the appropriately named Dr. Tabata (what a coincidence!) – a Japanese exercise researcher. It only lasts 3 minutes and 50 seconds. 3 minutes 50 – pretty easy right? Don’t jump to conclusions just yet.

A Tabata comprises 20 seconds of all out maximum effort, followed by 10 seconds of complete rest, repeated eight times. The premise here is simple. Get as many burpees done as you can in 20 seconds, rest for 10 seconds, then go again until the time’s up. If you get it right, this should be hell on earth. The trade off for it being so brutal, though, is that you’ve done your whole workout in less than 4 minutes.

Unless you’re man enough to go again that is.

There you have it, three awesome cardio drills guaranteed to shred fat and send your fitness levels through the roof. Not only that, but you can keep your dignity and pride and avoid the elliptical machine and Stairmaster while other men stare on in awe. This cardio couldn’t be more masculine even if it sported a Tom Selleck-style moustache, was best friends with Chuck Norris, and rode a Harley.