An Argument Against the Barbell

Barbells have a much younger history than we’ve been led to believe. They are also quite limited in design and application, and take up more space and money than is economical.

Before you jump on the defense in regards to the title of this article, let me tell you I am one of you, or at least I was. Ten years ago when I opened my first facility, the first piece of equipment I bought was a beautiful souped-up squat rack. This thing was beautiful, with all sorts of bells and whistles, and as I look back I realize had actually purchased this squat rack prior to actually having found my facilities location!

How does a coach like me go from being such a fan of the barbell to suggesting it is one of the least versatile pieces of equipment? Evolution. Questioning ideas, methods, and yes, equipment, can be a great source of discomfort for many coaches. However, becoming a better professional and serving your clients to the highest level requires that we serve as our own toughest critics all the time. If I am going to make a statement that makes so many people uncomfortable, I better have some good reason.

Why did I invest so much into my squat rack, barbells, and plates? Because this is how we were taught you got strong. You couldn’t even consider yourself a “strength coach” if the barbell wasn’t the heart of your program. After all, it provided us with the biggest lifting numbers and had the history of producing great strength athletes. But, does it really?

Barbells actually have a much younger history than most other strength training tools. Dumbbells, kettlebells, gymnastics, Indian clubs, sandbags, and more have a much longer and deeper history of use than the barbell. The barbell doesn’t show up in any type of writings until about 1854 and didn’t hit mainstream use until much later. Does this mean people weren’t about strength prior to the 1850s? In Dr. Jan Todd’s article From Milo to Milo: A History of Barbells, Dumbells, and Indian Clubs, she writes, “Barbells. There is not a single mention of this apparatus in Higginson’s article nor in any other English-language book prior to 1860 examined by this author. Although the practice of heavy lifting was well established by this time.” 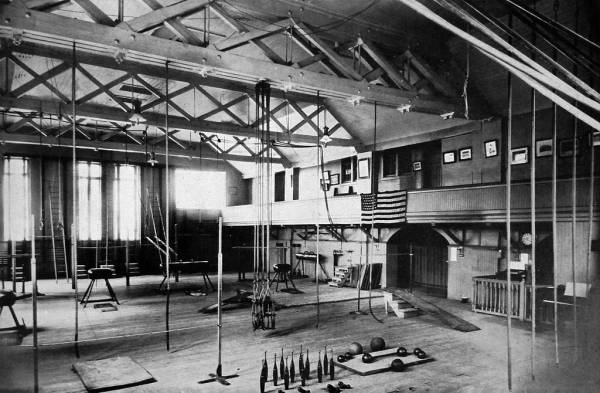 Okay, but we got smarter right? Barbells still allow us to build the greatest amounts of strength. Well, yes and no. Do barbells allow us to lift the highest amounts of weights? Yes! Does this mean what we think it does? Maybe not. Barbells became longer over time to support the desire to lift more weight, and as such the length and the design of the barbell has one major goal – hold more weight. The eventual modern design of the barbell also shaped how it is used in training.

As we become more focused primarily on load, our movements decrease. Instead of working from various body positions, angles, and patterns, we tend to work from a very stable base and lift from our strongest positions. Old time strongmen would lift early barbells in all sorts of ways. With one or two hands, they would lift barbells from a variety of positions and postures. In Mark Berry’s series of early barbell courses in the 1930s, dozens of different barbell movements were shown. Many of these lifts would have scared most modern coaches as being unsafe. Yet, the goal was the exact opposite. Working in all sorts of positions and postures was meant to prepare the body for more intense lifting.

Over the years we see our lifting becoming less and less athletic. The barbell is balanced, the way we perform most of the lifts is very stable, and even where we position the barbell is balanced. Of course we can lift more weight, but does this “more weight” really carry over to being stronger in the real world? 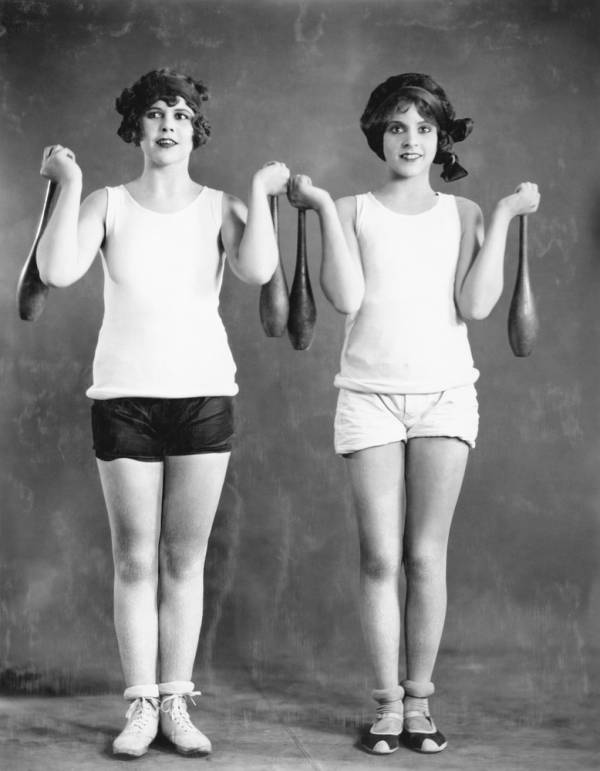 You don’t need to be a biomechanics expert to really question the reliability of the barbell. Let’s look at the classic bench press. A 315-pound bench press is not all that rare in strength circles. However, when was the last time you saw that same individual pressing 155-pound dumbbells? Even the casual gym goer knows that it is rare to find someone who can use the same amount of weight in dumbbells that they can in barbells.

This isn’t a matter of just gym knowledge. A 2012 study compared standing and sitting overhead pressing with both dumbbells and barbells. What did they find? “… the exercise with the greatest stability requirement (standing and dumbbells) demonstrated the highest neuromuscular activity of the deltoid muscles, although this was the exercise with the lowest 1-RM strength.” In other words, weight doesn’t necessarily correspond to greater muscle activation as much as some instability and control of a weight. Numbers may be lying to your training.

It is not a great secret that while the fitness industry is filled with passionate coaches, there is also a big hole in the way we look at the business of fitness. A great example is simply in the means with which we set-up our facilities. Space is one of the most important and expensive items for a new training facility. What requires the most amount of space? Yes, barbells, especially combined with racks or stands. But let’s put our examination primarily on just the barbell itself.

In a lecture at a Sanford Power and Strength Conference, coach Troy Anderson broke down the square footage of a barbell versus some of the non-barbell equipment. He examined the dimensions of the equipment, providing a buffer zone for safe movement and taking into account drills that require the most amount of space (ex. lunges). He found some interesting numbers. According to Coach Anderson’s calculations non-barbell related equipment (dumbbells, kettlebells, sandbags) requires approximately 24 square feet of floor space versus 42 square feet for the barbell training area. Almost double the space required to perform the same amount of training! This also means you are going to pay double in space for the same type of training. Is this a wise business move?

People love to share pictures like the ones in this article, but do you notice something about each of these early gyms? No racks, no barbells. And maybe this aspect in the photo below is not deliberate, but you can see how many more people we could serve without sacrificing the quality of training. 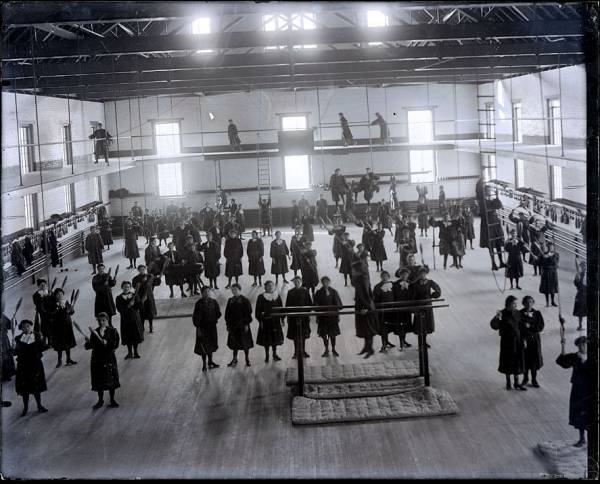 Lastly, related to business, there is cost. I think it is almost laughable when people complain about the cost of non-barbell strength training equipment and then spend far more money on a piece of equipment that takes up more space and possesses less versatility than most of these other forms of strength training.

Here is a real world example. Looking at a popular strength equipment distributor’s site a 160-pound barbell set with bumpers and what is considered a very basic set-up is $499.00. Add in the base squat stands and you are up to $775.00. In order to have a fair comparison, I can spend $725 on the same site and outfit myself with enough kettlebells, sandbags, and rings to train eleven people. 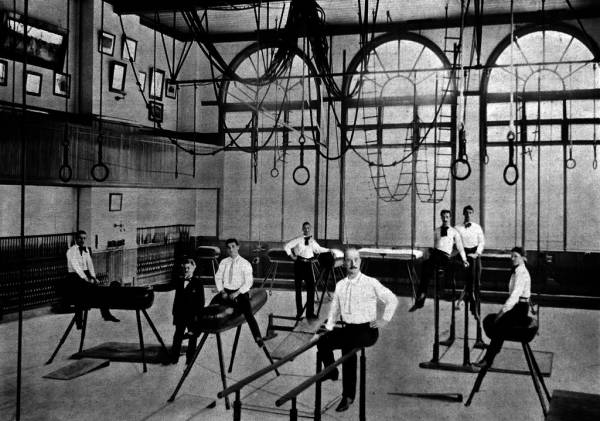 Remember, to be a smart businessperson, you have to look at your return on investment and costs to operate your business. In the above scenario the barbell set-up (remember, it’s not even high end one) costs me $775 per client trained. The second scenario outlined brings it down to about $70 per client. So, who has the better fitness business set-up?

It can be very challenging to be different. Going against the grain always puts us in a position to be alienated or scrutinized by those that we want to see as peers and mentors. However, when the information is so compelling and if we look at our history not with emotional goggles, but honest and thoughtful eyes, we see the errors of much of our ways. There are many reasons that the fitness industry has a turn over rate of about eighteen months. Part of it is in the way we service our clients and the ways we can set up our businesses. If there is a better way, why do we fight it?

Photo 1 and 4 courtesy of Shutterstock.