When you pick up a copy of Tapped Out: Rear Naked Chokes, the Octagon, and the Last Emperor: An Odyssey in Mixe

When you pick up a copy of Tapped Out: Rear Naked Chokes, the Octagon, and the Last Emperor: An Odyssey in Mixed Martial Arts by Matthew Polly, you will find yourself staring at a picture of the author getting his block knocked off by a gloved hand. From this, you know right off the bat that Matt is someone with an intact sense of humor, frequently of the self-deprecating variety. It appears this came in very handy as he chronicled his two-year journey from sedentary novice to mixed martial artist.

I had the opportunity to interview Matt about his book, which came out in paperback the first week of October. Read on for a closer look at the man behind the face in the way of the punch.

Matt decided to write Tapped Out as the result of a confluence of events: He was looking for a new writing project, he had had a prior interest in more traditional martial arts (as evidenced by his previous book American Shaolin, which described the time he spent studying kung fu in China), and he had a long-standing interest in mixed martial arts (MMA), dating from the late 1990s. So when frat boys and other demographics he thought were unlikely fans began taking interest, he thought “it was like my indie band had stopped playing garages and was now playing stadiums.” And he became fascinated by the transition of MMA from cult to mainstream.

When he raised the topic with his editor, his editor said it was a great idea and that he should do it. But, much to Matt’s chagrin, “do it” apparently meant “do MMA yourself even though you are 36, fifty pounds overweight, and haven’t participated in martial arts in ten years.” After some thought, he decided to go with it. It would be his last chance ever to compete in martial arts, and he also started to view it as an opportunity to redirect his life and get back in shape.

The concept of refocusing his life is consistent with Matt’s observation that the roots of any martial art are a form of worship, as the eastern martial arts are rooted in Buddhism and Taoism. While this may sometimes get lost in MMA with the hype and the crowd pleasing, to Matt, these endeavors are a way of life, not just calisthenics. 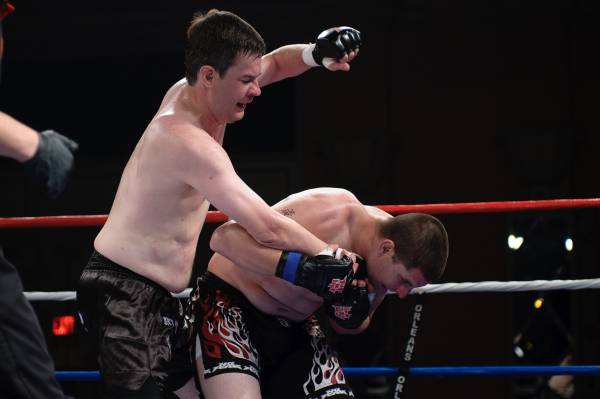 They also seem to take on this significance for the fighters Matt got to know as he trained in the various components of MMA in preparation for a cage fight of his own. He commented that a common misconception about mixed martial artists is that the fighters are just “animals” and their bouts are “bar fights.” But having spent time training himself, he caught a glimpse of how much sheer athleticism, sacrifice, and intelligence it takes to succeed. When fighters reach a higher level, it’s really about who’s smarter, and the dedication and hard work it takes cannot be overstated.

Perhaps this is why such camaraderie develops among those who take their training to the next level and actually fight. When Matt was simply training, his training partners at Extreme Couture, Randy Couture’s gym in Las Vegas, considered him just a journalist. But when they found out he was actually going to fight, he became a member of the brotherhood; they started referring to him as “our teammate.” Matt remembers being touched by this, especially after feeling on the outside for so long. “If you have the courage to get into the cage, even if you aren’t very good, you are an initiate into the tribe of MMA fighters.” The reason is the sense of shared sacrifice, “the willingness to do something a little crazy with nothing but your hands and your feet and your heart and your brain.”

Matt believes there is a place for a “sisterhood” as well, commenting that when he was at Extreme Couture he had the opportunity to watch female mixed martial artist Gina Carano train, and that, technically speaking, she was just as good as and sometimes better than the men. Unfortunately, there just weren’t many other women for her to work with, which limited her opportunities. Women’s mixed martial arts is currently where men’s was twenty years ago. But, particularly with female practitioners like Ronda Rousey coming on the scene, eventually women’s MMA will start to evolve the way men’s has, Matt predicts.

In his writing, Matt tried to capture the humorous aspects of both training and his own journey. He likes books that are funny and entertaining, and he found this combination to be particularly important when writing about MMA. As he explained, there is “something awesome” about two men squaring off against each other, “but also something slightly absurd.” As the “fat, middle-aged guy,” he often found himself thinking, “How did I get myself into this thing?” 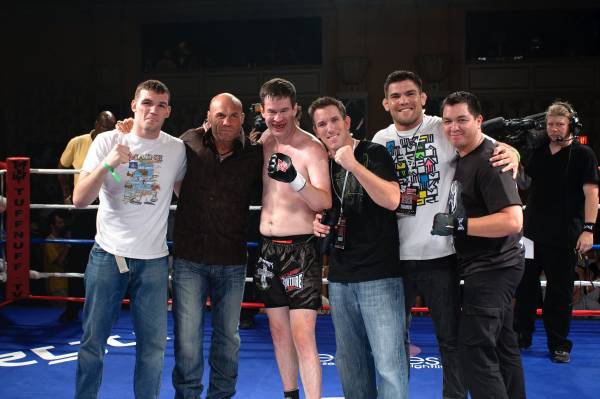 He cited a moment in the book when his coach said something along the lines of, “Okay, get on your knees, and I’m going to punch you in the face,” while Academy Award-winning actor Daniel Day-Lewis was jumping rope next to him. This was just one of many surreal moments Matt experienced during his journey. He commented that the best parts of the training experience involved teammates ribbing and joking and enjoying the moments between the training sessions.

Matt’s next book project will be a biography of Bruce Lee. After Tapped Out, he was happy to focus on something that didn’t require him to get punched in the face or to be the center of the story. In addition, it turns out to be a good follow-up because it touches on Matt’s kung fu background. Further, it speaks to his MMA experiences, given that many people consider Bruce Lee to be the godfather of MMA, as he (Lee) was the first to advocate trying numerous things and keeping what works.

When asked to name the main takeaways he hopes readers find in the book, Matt stressed again his appreciation for the skill of fighters. They are not just tough guys; they are high-level athletes, and the best ones are usually very funny, smart, and thoughtful. Despite the blood and guts, gladiator-type marketing that is used to appeal to eighteen year-olds, many fighters actually do their best to stay loose and have fun on fight day. There is something actually kind of joyful about having an opportunity to test oneself, and that feeling frequently results in gratitude toward one’s opponent. After Matt finished his own fight, he felt honored that his opponent gave him this opportunity. “It’s a bond that goes deeper than words.”

For further information about Matt, visit his website mattpolly.com. His book is available in paperback for $13.98 on Amazon.