Earlier this week, I shared the first half of an interview I conducted with mixed martial artist Darren Uyenoyama. Read on for the rest!

Darren’s nickname is Bone Crusher, though very few people call him that, sticking instead with BC. He got the name from Luke Stewart, also a Ralph Gracie black belt, as well as a mixed martial artist who fights for Strikeforce. One day during training, Darren was repeatedly looking for the bicep slicer (a finishing hold that puts pressure on the bicep and the humerus; if the person caught in the hold doesn’t tap, ligaments can tear, or bones can dislocate or break) while rolling with his training partner. After hitting the move a couple times, he locked it on again, but this time the training partner rolled the other way to try to escape. Everyone heard the snap, which put the training partner out of commission for a while. (Needless to say, Darren felt awful.)

The next day, Stewart said Darren needed to have a nickname, and started to riff off of what had happened the previous day. Thankfully (in my opinion), they decided that “Armbreaker” sounded stupid. “Bone Crusher” was floated, ended up sticking, and finally was shortened to BC, partly because Ralph Gracie is terrible with names (he could remember BC, but not Bone Crusher).

When contemplating his life now that he has a win under his belt at “the big show” and another coming up, Darren commented that it blows his mind when people come into the gym or talk to him about how they want to be world champions or MMA fighters, but then seem shocked when they learn what it takes: “You mean I have to eat right?” “That was just the WARMUP??” The life of a mixed martial artist isn’t all glamour, Darren has found, and the people who focus on the glamour don’t tend to do what it takes to keep the glamour. From my perspective, while he may not have had a specific plan, he has definitely demonstrated the focus and work ethic it takes to succeed. 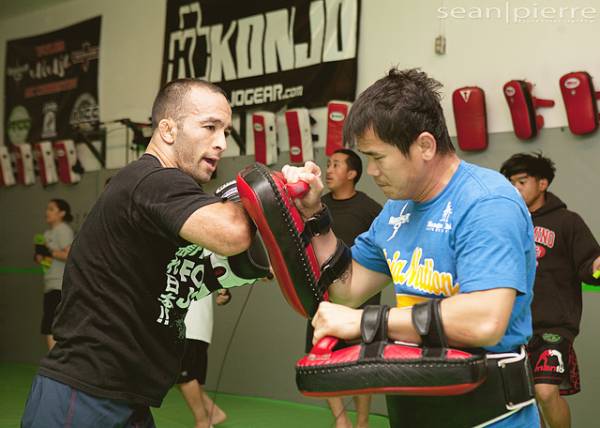 Darren and his family have had to take a little time to regroup since the win; I can attest to the fact that he hasn’t changed at all, but it appears that the people around him have. Acquaintances have started to expect things from him, as if he’s some kind of golden ticket. People introduce him to strangers by listing off all his accomplishments, as if they are trying to gain some credibility through knowing him. So he has felt very disconnected from people he has known. This has made some of them give him even more grief, because they have interpreted his retreat as him deciding he is too good for them now, rather than what he needed to do to acclimate and to keep himself focused on his priorities, his values, and his real friends.

Learning this, I did what any friend would do: I made merciless fun of him for the entire time he was here, as did everyone else at Fifty/50. I like to think that treating him this way is the single most important thing we could have done to help shape a mixed martial arts champion, and I wish Darren the best of luck in May and beyond.

(No need for thanks, Darren, you sweaty, hairy little bastard. I’ll make fun of you any time – free of charge!)

Read part one of my interview with Darren: