Every sport has bread and butter sessions – sessions where you learn where exactly you stand in terms of your performance goals. Here are mine, as I continue to train for Ironman.

Every sport has bread and butter sessions.

For combat sports they may be competition rounds. For golf it may be fifty balls with each club. For runners it may be repeats at race pace. For competitive lifters it is clearly lifts in the lifts they compete in. The point is that everyone has a few sessions that they know indicate exactly where they are when it comes to performance.

So what are the indicators for my performance?

I swim three or four times each week, with two of those being key sessions. The first is done on Monday and is a lot of 50m lengths done with the pull buoy. Why is the pull buoy so important? Because it allows me to swim in the same body position as I’ll have when in my wetsuit during my Ironman. Secondly, because I spend my weekend putting in big miles with my legs it makes sense to rest my legs totally on Mondays. This week I swam 70 x 50m at my threshold pace with a ten second rest between intervals.

The second session I know I need has longer sets in it – usually 200m lengths. Last week I swam 15 x 200m with thirty seconds rest between intervals as the main set, holding just over three minutes per 200m. This equates to a one hour Ironman swim, which is my goal pace. This is quite a painful session.

My other sessions in the pool are all about hypoxic breathing and working my heart and lungs, not my arms.

The key ride for the week is simple – a four to five hour effort over undulating terrain at my target heart rate of about 140bpm. There’s nothing sexy about this session at all but the long rides and runs are the keys for building the specific endurance necessary to go all day long, as well as discovering what nutrition strategies are going to work and which won’t.

Like the riding there is a single key session for the week’s running and it is a two-hour easy run. With my calf troubles I’m not able to do these at the moment, which I have to admit is making me a bit paranoid. The long run is the key session for the entire week. While Ironman involves swim, bike, and run, they say the race doesn’t start until you get to the marathon. With the weeks ticking over and me still not having hit even one of these yet, it’s starting to feel like the walls are closing in.

While training for the Ironman I also have to keep up with my kettlebell training, so I can maintain my standards as an RKCII. The best way to do that is to split my needs into two separate workouts. The first day is push presses and jerks the second is heavy get ups, presses, and squats. 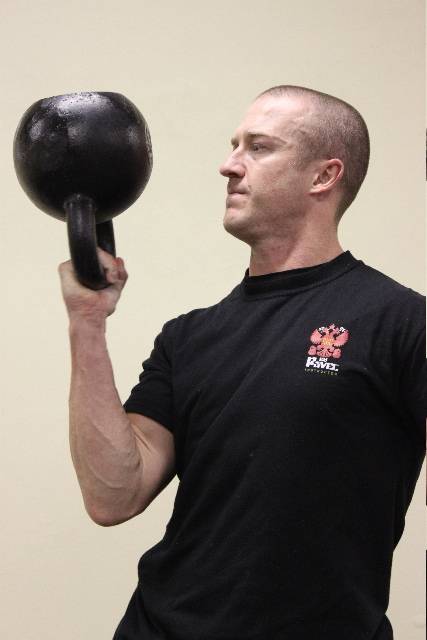 The reason for splitting them is simple – fast lifts do better on their own day and slower, grind lifts on their own, too. Before each session I spend a lot of time stretching, mobilizing, and crawling around on the ground doing Primal Move. Because of all the time I spend hunched over my bike and all the internal rotation of swimming it’s vital to get my body out of those positions as much as possible. This helps me keep better posture and prevent injuries down the road.

While the above may not seem like much, apart from my calf issues, I am still progressing nicely. The goal each week is not to fit as much in as possible – in the short term the body will figure out a way to cope – but to progress. That has meant dropping the volume of strength work I do. It seems counter intuitive but this has actually allowed me to keep gaining strength even though it appears I’m doing less. I simply wasn’t able to adapt to the amount of work I was doing before and now that I’ve started doing less I’m back moving in the right direction again.

If you’re training for performance the only true way to measure progress is via competition efforts. My time trials are coming down slowly but surely, and my gym lifts are improving, so I know I’m heading in the right direction. I can see a point where the strength work will need to be cut in half, from four sessions weekly to two, as the volume of aerobic training is going to become too high to be able to cope with the extra two sessions. For now though everything is good and hopefully I’ll be back out running soon!