I have four levels of training – rest, recovery, fluffy, and full. There are reasons for each and even different levels within “full” that need to be explained.

Complete rest from training. No activity at all beyond stretching, mobility, or walking for less than thirty minutes daily.

Full rest weeks are for times post big events, or when you miscalculated by using way too much volume or intensity in your training and you have either completely buried yourself, or you recognise you’re about to.

While it may seem counter productive the truth is that training doesn’t make you better. Resting makes you better. Training stresses the body enough to cause a change, provided you recover from that stress enough to display it.

My current training plan has me recover every third week. Why every three and not one week per month? Because it works for me. Tony Benson, one of Australia’s greatest distance coaches, originally put me onto it and it just works. In the words of Dan John, there is great strength in just being able to say, “Coach said so.” Tony has trained world champions and many Olympians, and if he says having a deliberate recovery week every third week is the way to go then who am I to argue.

Test week – When volume goes down it is acceptable for intensity to rise. So every other recovery week I test myself in various time trials to see where my fitness is. This is both motivating as well as educational, as it also allows me to start predicting finish times for any event.

So once every six weeks I test myself. In one six week period I will test shorter distances such as 500m swims and 1km runs. The next will be longer distances like 1000m swims or maybe a 40km bike TT followed by a 5km run.

During these weeks I may only train a few times and this is a key to recovery. I like to cut my volume to no more than 60% of my normal week. I also make sure to get some massage from the world’s greatest massage therapist, Anne Davies at Olympic Park Sports Medicine Centre in Melbourne. Or if something is hurting I visit the “magic hands” of Matt Hopkinson at Glenferrie Sports and Spinal Clinic. Why do I get regular work done? Simple – remember that Formula One cars spend more time in the garage being worked on than they do on the track. If you want to perform you need to make sure your mechanics are doing as much for you as they can and these two are the bomb.

Normal recovery – During a non-test recovery week I will still cut volume, but I’ll also deload from any speed work. No hills, no high heart rate, and nothing too long, such as my usual two hour Saturday morning run. The final effort for the week would still be something like a two hour ride followed by a run of up to an hour, but all done very easy.

I’m stealing this term from world champion Chris McCormack. This is a normal week, but paying a lot of attention to how your body feels. For instance, on Tuesday I did my scheduled hill run. A 2.4km warm up followed by six repeats up a 400m hill at a gentle gradient. Now these aren’t sprints, just hard running, faster than my usual pace, but far below all out. On the fifth rep my left calf started telling me it wasn’t happy. Instead of doing the smart, fluffy thing to do I finished the set then ran another 1.2km to cool down. But by the time I got back to my car it really wasn’t happy. Do as I say, not as I do, okay?

That was followed later in the day by what turned out to be a very hard ride in tough conditions, made all the harder by not being able to stand on the pedals because of my calf. After the ride my calf was much improved, however, leading to me think it wasn’t torn, just unhappy and after a night in my trusty 2XU compression socks it is even better today.

Which leaves me wondering how it will be tomorrow. Normally I would plan to run and ride tomorrow, but now my plan is to see how my calf feels and perhaps just ride longer.

Fluffy is listening to your body and not being a slave to your plan.

Full training mode is exactly that. Every session to the letter. Every rep as hard as indicated and absolutely no missing sessions. For the IM project I won’t be in full training mode until twenty weeks out. 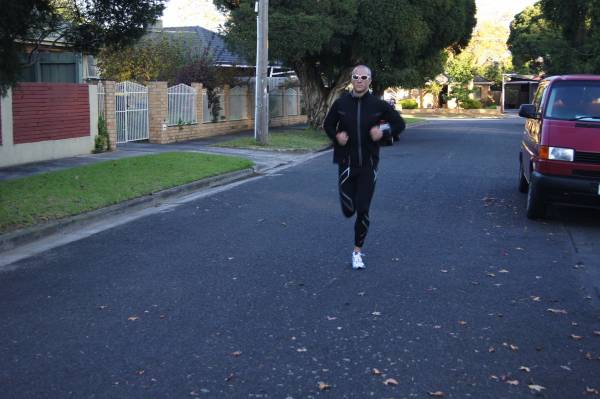 While I think that GPS, bike computers, Strava, etc. are all good toys, at the end of the day you don’t need that stuff. Beyond my test weeks and time trials I tend to avoid that stuff as just adding needless complexity to something that is fairly simple. And when I consider that greats like Mark Allen and Dave Scott trained and raced without them twenty years ago, and that times are not really any faster now than they were then, I’m even less encouraged.

I use four intensity levels within a session – easy, moderate, steady, and hard.

Easy – This is exactly what it says. No effort to go fast and I should be able to either breathe through my nose or carry a conversation. Good for recovery weeks and longer runs and rides.

Moderate – Not easy, but impossible to sustain forever like your easy pace feels. It’s the sort of pace you’d hold for twenty to sixty minutes but struggle beyond that.

Steady – This is a little fuzzy as it’s race pace. So if you’re training for short distance it’s actually almost the same as hard. But for longer events it may actually be closer to moderate. Either way, it’s where you get to work and hold it for long periods of time.

Hard – Exactly as it says. This is the ride where you see stars at the end or rainbows at the end of the pool. It’s entirely possible you may vomit a little, too. While a useful tool, too much time here can destroy an entire week of training by necessitating you to schedule full rest days.

For example, a few years ago I did a 3km hard time trial to gauge fitness and was almost unable to get home my legs were so fried. And my throat hurt for days after and felt like I’d burnt it! A four minute effort took me four days to recover from.

Use these intelligently in your training and you’ll find that you can get a lot of work done over a year. Fluffy is the key – listen to the body and take care of it when you need to, even if you feel lazy for doing so. Then, having built your strength and recovery ability over many weeks of fluffy (and using rest and recovery when needed) you’ll be ready to make the most of it during hard weeks before your event. Just don’t try to do hard all the time.