Athlete Journal: Holley Mangold, Entry 11 – The Love of the Sport

This week Holley is back in Columbus after a training stint at the Olympic Training Center. She talks about how she finances her training, what makes it worthwhile, and highlights a fellow lifter.

Welcome to the Athlete Journal of Olympic weightlifter Holley Mangold. Holley is part of Team USA headed to London this summer. Follow her journey here as she trains for the 2012 Olympics! Holley’s journal will be posted every Friday.

There was a huge meet this week at the Olympic Training Center (OTC) that was the highlight of my training since the trials. It wasn’t necessarily huge because it won anything, but it was a major confidence booster: I PRed, adding about 10kg to my combined lift since March. Although I know I will push myself more when August 5th comes, it felt good to get some good numbers up – 118kg in the snatch and 147kg in the clean and jerk. Other lifters had a great meet as well. I think there was just such positive energy there that we all felt at our best. I have videos up on my Facebook where you can see my lifts and watch an incredible lift from Zach Krych (who has been retired and still had great numbers).

Over the weekend I helped teach another CrossFit course for CrossFit Hypoxia. It was awesome because it was up in the mountains and had the most amazing view of Colorado. It was breathtaking to be so high up! Its always a good time to be around CrossFit people, but when you add in the scenery it really was the best.

I am now back in Columbus and it truly feels good to be home. I’m so excited to be back in the gym with my coach, Mark, and to see my unrelated twin, Heather Smith. We look enough alike that she might as well be related.

I realized the biggest thing I’ll miss about the training center is not the food or the schedule, but it’s the super cool people at the OTC. I wish somehow my favorite people there and my favorite people in Columbus could just all live in the same region. It would make things a lot easier. Although, if missing people and being sore were my only problems I’d say I have it easy enough as it is.

There has been some talk about how little weightlifters make in comparison to other athletes and people have asked me how I feel about this. I get a stipend from USAW for $400 a month and they pay for food and travel when I’m at the OTC. In addition there’s City BBQ and CrossFit money, but really, my expenses are so low that as long as someone feeds me, I’m a happy camper. I feel really blessed to be doing what I love and the fact that people take notice and I even make anything at all off of it is really lucky. My sister loves to run, but no one pays her to train. We do it for the love of our sports.

I have a couple upcoming events in my home town that all are welcome to: July 12th I’ll be at Kettering Elsa’s at 4:30 and July 15th I’ll be at the Dublin Pub in downtown Dayton at 2pm. I’ll be doing a weightlifting demo and a meet and greet at all locations. I’m excited to see family and hometown friends that I haven’t seen in awhile before I leave for London. I’m especially excited to see my little sister who I haven’t seen in awhile.

Last, but never least, my highlighted athlete for this week is Hilary Katzenmeier: 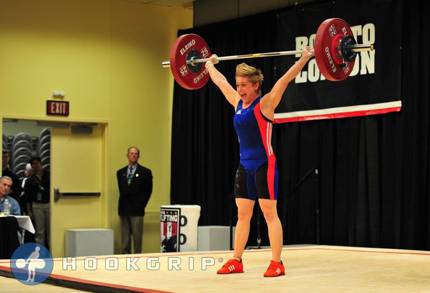 I appreciate the following on this blog and hope everyone keeps up with my Twitter and Facebook as well!