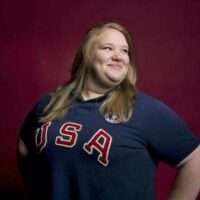 Ohio native Holley Mangold is no stranger to elite competition. The daughter of an accomplished swimmer, Holley made her own name for herself when she became the first girl ever to start in an Ohio High School State Championship football game (as an offensive lineman no less). And if you know anything about high school football in Ohio, you know the significance of that achievement.

Though Holley loved her twelve years on the football field, her athletic career came to a crossroads upon high school graduation. Faced with bleak prospects of being competitive on a college football team as a woman, Holley turned to throwing shot and discus at Ursuline College in Cleveland. Holley had prior experience in powerlifting—with the legendary Larry Pacifico—during high school, but started to look for a strength sport that could specifically help in her throwing career. She quickly found weightlifting—with Coach Dan Bell—and she continued to lift in college.

Over the next two years, Holley continued to improve in the quick lifts, the snatch and the clean and jerk. After strong performances in both the 2008 and 2009 Junior World Championships, Holley won gold in the 2009 American Open and earned one of only 7 spots on the 2010 Pan American Team.

Holley’s steady improvement eventually earned her an invitation to the US Olympic Training Center in Colorado Springs to train with National Team Coach Zygmunt Smalcerz and an MTV reality show:True Life: I’m the Big Girl.After failing to improve at the OTC, however, and suffering a knee injury in the process, Holley left Colorado to have surgery and to train with Coach Mark Cannella in Columbus, Ohio.

Cannella, widely considered to be one of the best technicians in the country, went to work on Holley, and eleven weeks later, she set lifetime personal records at the 2011 Arnold Weightlifting Championships and has set a personal record in every national and international competition she has competed in since.