This week I started thinking about our “CrossFit Heroes.” Mine is Amanda Miller, a remarkable athlete who I can emulate, as an athlete, a coach, and even a person. That’s what a hero should be.

I got to thinking about our “CrossFit Heroes” this week. Those people who inspire us. Those we look up to. Those who, perhaps, we sometimes heap too much adulation upon.

The reason I started thinking about this was that the CrossFit Games website posted a profile story that, to be honest, kind of made me scratch my head. Not the subject of the story, but the reaction of some of the commenters on both Facebook and the Games site. It seemed disproportionate.

We live in a consumer world, and as consumers, we tend to gobble up whatever and whomever are spoon fed to us, and that includes our sports heroes. We’re not unusual in the Sport of Fitness in our near-deification of our elite athletes. We’re human, so we tend to idolize those people who represent the ideal of what we wish for ourselves – elite athleticism, good looks, marketable faces.

So I took to Facebook and posed the question to my fellow masters: “Who are your CrossFit heroes, and why?”

I was pleasantly surprised by some of the answers.

Most people named as heroes someone who was not a big name in CrossFit. Cynthia Jolicoeur named Maura Brown, who went from overweight to very fit and then created a program at Jason Khalipa’s Norcal CrossFit to help others to the same.

Jacinto Bonilla (who many would likely name as their personal CrossFit Hero) named Kyle Menard, and simply said “No one needs to explain this one.” I agree.

Many folks pointed to people from within their own box. Coaches who have helped change their lives or athletes who struggle every day to change their own.

My CrossFit hero passed away in 2010.

If you do not know who Amanda Miller is, I urge you to get to know her. Amanda competed in the 2009 CrossFit Games and then lost her battle with melanoma less than a year later. Yes, she is that Amanda, for whom 9-7-5 muscle-ups and snatches workout is named, and it was dedicated at the 2010 CrossFit Games.

I got to know Amanda only posthumously after researching the workout itself, then reading her blog from cover to cover. I then was so consumed by her story and her will to fight, that I felt called to create a fundraiser to help raise money for melanoma research, and thus Amanda Miller Memorial WOD was born. Her blog reveals, and her mother confirmed, that she was someone who would simply not take “no” for an answer. I had the pleasure of meeting her mother and brother, and feel as though I really got to know this amazing person whom people called “Guns” because of the two pistol tattoos that emanated from her waistband.

What I learned about Amanda was that she was a fighter. She fought hard for everything she accomplished and even when she was sick, she continued to fight. What struck me most, is that she would post a blog outlining her chemo treatments, swelling in her liver, nausea and vomiting, and then post her workout results from that day’s training.

I don’t know about you, but I have a hard time training with a scratchy throat. But training while dealing with an aggressive cancer, and all of the punishment the treatment for same lashes on your body?

Take this post for example. Watch how remarkable this is – keep in mind, her cancer treatments are in full swing. She is getting scanned, poked, dosed, radiated, and more. She is only two months away from succumbing to cancer. 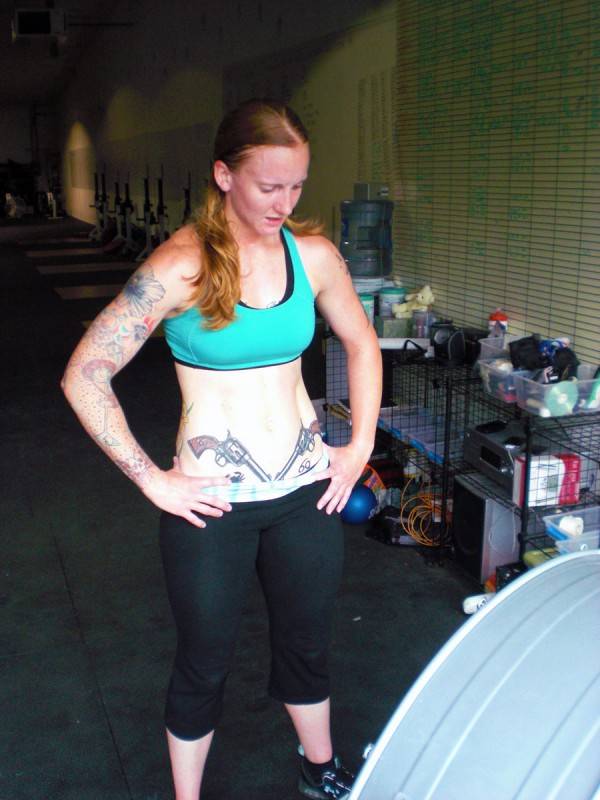 In this post, she briefly discusses her medical update, and then talks about her mom and brother with warmth. Then posts an article for people to read. She posted some tidbit of information in every single post in order to educate, inform, and perhaps entertain those reading the blog.

She then goes on to apologize to her fellow athletes at the gym for not being as peppy as she should be and finally, posts her workout.

And then she says this: “going to be a lean machine when I come back.”

In nearly every post, almost until the last one, she talks about getting back. Regaining her previous strength, PRs, muscle mass, seeking to compete again in the Games. I marvel at how many of her posts are “treatment, workout, treatment, workout” in nature. This girl was CrossFitting until she could no longer walk.

She never seemed to say “Why me?” She never gave up. She accomplished a tremendous amount in her short life, both inside and outside of the CrossFit world.

This is my CrossFit hero. Someone whom I can emulate, as an athlete, a coach, and even a person. Someone who left a legacy behind, as simple as this message: Never give up.

We all have heroes in this sport. But do yourself a favor. Don’t let CrossFit Media tell you who to look up to. Find your own hero – somewhere in your box, a comeback story, etc. Google Steve Liberati or Gabe Subry. Lots of CrossFitters are changing the world. Those are the heroes.

And then sit down and your computer and Google “Amanda Miller CrossFit” and start reading. You will be amazed at what you discover.