Quite a Year Part 2: Rebuilding With a Plan

In my last entry, I discussed arrival at ‘rock

bottom.’ I spent a year fulfilling my own prophecy where I declared that making it to the Games in 2012 was impossible, coupled with a rather nasty divorce from my former CrossFit box. Things did not look good.

If you have never seen Rocky 3, let me give you the thumbnail version: Rocky is a couple of years into his fighting career, winning fight after fight, but he is fighting no-name bums. Suddenly a young, hungry fighter named Clubber Lang challenges him.

Rocky has gotten cocky and lazy in his training, believing in his own celebrity, while Clubber is training like a beast. The day of the fight comes, and not only does Clubber beat Rocky to within an inch of his life, but Rocky’s beloved trainer, Mickey, also dies of a heart attack. Suddenly Rocky is defeated and alone, realizing his fighting career had been a sham, his trainer is dead, his championship title gone, and he is at rock bottom.

Out of the blue an old foe, Apollo Creed, picks up the phone, and offers to train him to a comeback. Next thing you know, these two former opponents are running slow motion through the surf, chest bumping and high fiving.

Stephen Flamm, owner of Cincinnati Strength and Conditioning, picked up the phone.

Stephen and I went back to 2009 when I visited his box for a few workouts. One thing that I was always acutely aware of was that his box seemed to churn out extremely accomplished athletes on a fairly regular basis. He always fielded a team at regionals, he gave several regionals-level athletes their start, he was a student of programming virtuosity, and he sent Glenn Waters to the Games in 2012 in the masters 45-49 category.

Steve’s message to me was simple: if you want to crawl out of the hole, get your ass into Cincinnati Strength and train here. This is where you need to be.

So in April of 2012 I began training at Cincinnati Strength and Conditioning. We discussed goals, programming, strengths, and weaknesses, and determined that the OPT programming was the best course of action to start into the summer months. Without question, one of my relative weaknesses was conditioning. I could train strength fairly easily but breathing always seemed to be my nemesis. Steve knew how to attack this.

One thing that became evident fairly early as I began my training at Cincinnati Strength was that I was definitely in a Games training environment. At my former box, the CrossFit Games were relegated to the back room, after hours. It was something that was neither encouraged nor outwardly supported. At CSC, Games training coexisted with the daily CrossFit classes in a very positive synergistic relationship – folks in the classes were always surrounded by those seeking to compete, in an environment that makes everyone a better athlete. 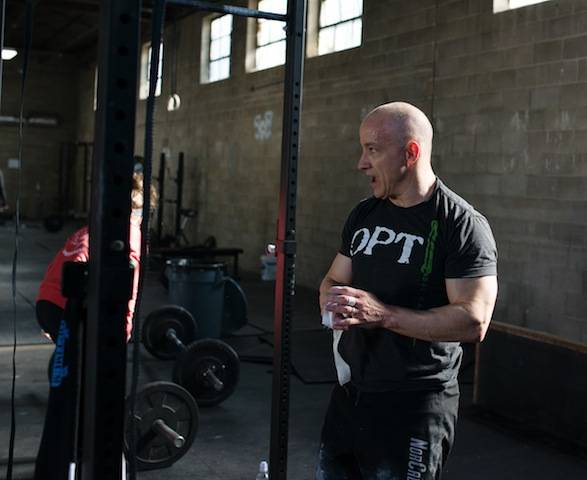 Training for the Games in 2011, I had no coach. I just fumbled around on my own, creating a veritable mix-tape of programming, not knowing if I was on the right track or not. Having a hands-on coach was a rather different experience. Steve knows when to leave you alone and when to intervene – usually at that critical moment in a training workout when you need to be pushed past the comfort point. Just about the time you are ready to ease up on the throttle, Steve appears behind you and says, “Gut check time Pat – push these next two minutes hard.” Crap. I was hoping to grab a few breaths with my hands on my knees, staring at the floor.

That sort of mental toughness training is what has allowed me to continue to push past the comfort point. ‘Comfortable’ will not get me to the CrossFit games but rather, accountability to the goals I publically stated, and that means getting comfortable with being very uncomfortable.

The net result has been a solid plan: OPT programming with adjustments for weaknesses as needed with oversight by Stephen Flamm, solid coaching, nutritional feedback, and an environment where I can thrive as a person seeking to compete at a higher level.

But the secondary and perhaps more important result is the community – no questions asked, no judgment, just an invitation to come in and train with some of the best athletes in the Central East Region. And focus. And that focus, as of this writing, has me in eleventh place in the world at the moment.