My work schedule is getting heavy, so I have to pick and choose my workout scheme carefully to make sure I maintain quality.

My work schedule is getting heavy, so I have to pick and choose my workout scheme carefully to make sure I maintain quality. The fear I have is that the rhythm of work will get disrupted. When that happens, all kinds of problems rear their ugly heads. I have to spend more time in training sessions outside the weight room to make up for the lost time that should be done in the training hall.

I had to miss Monday’s workout, but I hoped to make up for it sometime during the week.

Tuesday became Monday’s session, but had to be abbreviated due to other commitments.

Wednesday was squat day and I felt awful. I spent at least an hour in the warm up, but nothing seemed to get my body functioning at the level it needed to be at to handle the weights on the schedule. I tried the weights anyway, thinking that the stress might wake me up. No such luck. The weights were heavy and I struggled with most of them. The last straw was the level of difficulty 130kg gave me. I could only manage two reps and each one crushed me like a bug. It was stupid, so I bailed out of the workout.

As the day progressed, there was a break in my day that gave me the opportunity for another workout. I decided to try that back squat session again – after all, what’s the worst that can happen, a repeat of the morning workout? The warm up went well and I felt optimistic with the direction this decision was taking. I got to 130kg and got two sets of six reps with no real problem. What a difference five hours can make. I jumped to 150kg and got the two sets of four reps, with the last rep of the second set a three-second stop squat. I was feeling good and took 100kg for two sets of ten reps in the speed squat, which were easy. Good decision to repeat.

I woke up Thursday morning and my legs were a little sore, but mobility was okay. This was surprising, considering the abuse they took the previous day. My warm up went well and I decided to proceed with the planned workout for today. I had clean and jerks on the slate but decided most of the work was going to be power rather than full clean.

Friday was fitness day and the circuit was sixty minutes long. I was not looking forward to this workout. As I feared, the session was long and gruesome, but I pleaded and begged my body to perform to the bitter end. Now it’s done, and I don’t have to do that again for another four weeks. 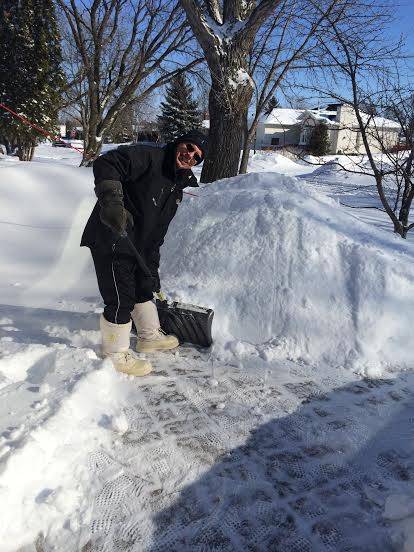 Saturday was a day off the weight room but another opportunity to perfect the art of snow shoveling.

Sunday morning was a repeat of Wednesday morning. Once again I was feeling awful on a squat day. I tried to get going, but all the weights felt heavy and burdensome. I was supposed to do 120kg for 6 + 4 + 2 stop squats for two sets. On my first set of 120kg, I could only manage four reps. The second set was two reps and they were not even stop squats, so I decided this portion of the day was over. I switched to five snatch pulls with a power snatch as the sixth rep. I did 55kg for three sets, then took 65kg and 75kg for a set, and finished off with 85kg for two sets.

I managed to salvage something from this day. I’m guessing that I won’t be able to work out now till Wednesday.