The Fundamental Aspects of the Dip: Perfecting Your Jerk

The dip in the jerk seems straightforward enough (straight down, actually). Bend your knees, and straighten them vigorously. But like many simple things there’s more than meets the eye.

The dip in the jerk seems straightforward enough (straight down, actually). Just bend your knees, and once bent straighten them vigorously. Sounds pretty simple, right? Yes, it does sound simple, but like many simple things there’s more than meets the eye. Let’s take a closer look at this phase of the jerk.

The Center of Gravity

At the start of the jerk you will be standing vertically with the bar on the chest, your arms relatively relaxed and not tensed, and the elbows positioned forward of the bar. The center of gravity of the athlete-and-bar system (CGS) should be close to your ankle joint. This positioning is important for making a successful jerk. As with all lifts, the smaller the moment of force of gravity, then the less effort is needed to maintain a stable position under the bar. The ideal position of the CGS is over your ankle joint where the smallest moment of force will be.

That all sounds good in theory accept for one thing. That one thing is the weight of the barbell, for the CGS must include that as well as your bodyweight. The complicating factor here is that as the weight of the barbell increases, your CGS is going to move away from the heels and toward your arch and toes. This is especially vital where the weight may be approaching three times your bodyweight as it does in elite lifters. Even if you’re not in that august category you are still possibly jerking up to twice your bodyweight, which will still have a material effect on your CGS. You can read in more detail about the CGS here, but please be aware of this when you are jerking.

The Depth of the Dip

The depth of your jerk dip should utilize the full strength potential of your legs. The parameters we are most interested in with the dip are its depth, its braking, and its speed of execution. These will in turn depend upon the weight of the barbell and your height. According to studies done by the Soviets, a lifter’s jerk dip depth should be about 11% of the lifter’s height. This is deeper than many people assume it to be. Even lifters sometimes assume they are only dipping four inches or so. This depth will vary only slightly, less than 1%, depending on the weight of the barbell, with lower depths being reported for lighter weights. Any depth much greater or much less than this 11% will generally result in a bar that is not jerked to the necessary height and therefore not fixed overhead.

If you do not dip low enough you obviously will not have enough power to drive the bar to full arm extension. Conversely you should not dip too low. This seems counterintuitive to those who have never lifted. They might assume that you could utilize the full power of a squat by driving from a very low position and sending the bar heavenward. Well, it doesn’t work that way. The force needed to come out of a front squat starts to dissipate at its completion so that there is insufficient drive left after the bar leaves the shoulders.

This is especially important to remember for CrossFitters who are converting to weightlifting. One of CrossFit’s favorite movements is the thruster, where this type of movement is utilized. The lifter rises from a front squat and then drives the bar upwards without a dip. This is fine for lighter weights done for reps, but this technique will not work with a heavy competitive jerk. So the point to remember here is that there is a sweet spot for jerk depth – not too low, not too high, and about 11% of your height.

The Two Phases of the Dip

Another point to remember about the dip is its two-phase nature. While to the layman the jerk dip looks like a single movement, in actually there are two phases felt by the lifter. The first part is relatively easy. You start the lift with a smooth and easy squatting motion. This is the acceleration phase and it lasts for only about .3 seconds, and the distance covered will be on average about 6.5% of your height, which works out to about two-thirds of the depth of the dip. The bar moves slowly at the top of the dip and picks up speed due to the fact you are relaxing the quadriceps muscles, the bar is heavy, and both you and the bar are acting under the influence of gravity. Therefore the downward movement picks up speed.

But this acceleration cannot last for long. The bar must eventually be decelerated in preparation for the change of direction at the bottom of the jerk. The second phase is referred to as the braking phase, which lasts only about one-tenth of a second and covers about 5% of the lifter’s height. At the extremes, the heavier the barbell the longer the braking phase must be, but this is not noticeable to the naked eye.

Ultimately the athlete-barbell system stops its descent and even pauses at the bottom of the dip. However, the duration of that pause should only be about 0.03-0.06 seconds. Not very long. So it could be considered an instantaneous change in direction. After that you start your drive upwards using quadriceps power in order to drive the bar overhead. The faster you can change dip direction, the more weight you’re going to jerk. 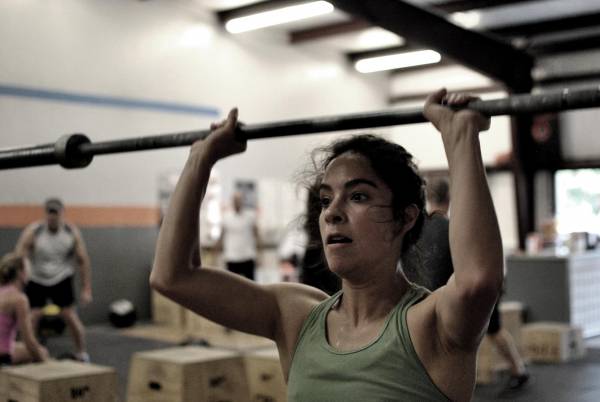 One error in this part of the jerk that novice athletes often make is that they come to a complete stop in their dip before the drive upwards, probably due to some anxiety or lack of confidence. This is something you have to be trained out because if you persist with such a technique you will never jerk a decent amount of weight. By coming to a complete stop, you lose out both on the stretch reflex of the quadriceps muscles at the bottom of the dip and on utilizing the elasticity of the bar. With so much force lost the athlete ends up having to use a lot more arm power to try to drive the bar high enough. The result is often a press out and red lights. If you do manage to lift the weight, all that can be said is that you are lifting far below your potential.

The Flexibility of the Barbell

Don’t forget about utilizing the Olympic barbell’s flexibility. At the bottom of the dip the barbell will still be bending downwards somewhat and will remain so even after the drive starts. This adds a little extra resistance for the legs to overcome, but soon afterward (a split second) the positive phase of the bar’s elasticity starts to work in your favor while at the same time your quads are working hard to straighten your legs. Learn to work as a unit with the bar and higher jerk poundages will always be the result.

The Angle of the Knee

There has been a lot of mention in the literature from the old Soviet Union of what angle the knee should be at in which stage of the jerk and so on. This is probably only of marginal usefulness to any real-world lifter. You will know you have the right angles and whatnot when you are jerking whatever you can clean. You always have to jerk at least that much, and fortunately you don’t need to be able to jerk much more.

The Dip in Summary

When you are dipping for your jerk your knees will move forward so your center of gravity will to have to move forward too. And, since you are holding onto the bar at your shoulders, so does the CGS. Therefore you have to realize the deeper the dip more precarious your CGS becomes. So what you have to learn in your dip is to dip low enough and then to change direction at the bottom instantaneously all while being aware that you do not want to lose your CGS during any of this.

1. “The Components of the Jerk from the Chest,” A. T. Ivanov, Honored Coach, RSFSR (Russian Republic) and Robert. A. Roman, Candidate in Pedagogical Science. From an entry in a Soviet Weightlifting Yearbook, c. 1975.