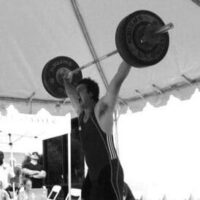 Don coaches weightlifting at Waxman's Gym, in addition to being a member of the gym's competitive weightlifting team. He is also the founder and coach of DEUCE Gym’s Barbell Performance classes. Having previously worked with high school and college teams as a strength and conditioning coach, Don’s specialties include coaching barbell and Olympic weightlifting technique to groups and teams. Prior to coaching, Don was an All-American water polo goalie and two-time national champion at the University of Southern California.