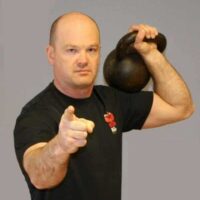 Jon Engum is an enthusiastic, motivating, and inspiring instructor. The energy he transfers onto his students encourages self-belief while instilling the importance of positive thinking and implementation. His passion for learning and teaching came at the early age of eight when he began training in the martial arts, working his way to instructor as a teenager. In 1990 he opened his first training facility has been training children and adults for over thirty years. He currently holds a 7th degree blackbelt “ Grandmaster” in Taekwondo and a Masters(4th Dan) degree both Hapkido and also Kumdo (Korean Sword).

Enter Pavel. Jon was introduced to Pavel Tsatsouline when he signed up for his flexibility course in St. Paul, Minnesota and was so impressed with the rapid results that the kettlebell was a natural progression. Since that time he has immersed himself into the study of the kettlebell and how to implement its use in improving overall fitness and the martial arts game.

As a Taekwondo coach Engum uses the kettlebell as the sole conditioning tool for his national competitiors. Along with his continuing education, teaching and coaching in the martial arts, he has been busy teaching Hardstyle Kettlebell Certifications (HKC) nationally and internationally. As a Tactical Combat Kettlebell specialist, Jon teaches military and law enforcement agencies. Jon is also the owner of Extreme Training.