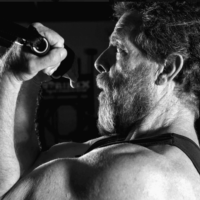 In 1961 at the age of 11, Marty Gallagher began weight training with a neighbor whose uncle happened to be a local Olympic weightlifting champion. By age twelve, Marty was competing as an Olympic weightlifter and in 1964 at age 14 he became the youngest person to ever win a DCAAU senior men's title. At age 17, Gallagher won his first national title and set his first national records. As a teen lifter he posted a 270 press, a 235 snatch, and a 315 clean and jerk weighing while 195 pounds.

Years later, Gallagher trained in Hugh Cassidy's basement gym with two other future national champions, Marshall Peck and Joe Ferri. Everyone followed Cassidy's brutal, highly effective, innovative power strategy. Gallagher, Ferry, and Peck moved onto Mark Chaillet's brand new gym in Temple Hills, Maryland when it opened in 1980. This gym became one of the best power gyms in the country. Marty became Mark Chaillet's training partner and purposefully pushed his bodyweight to 245 pounds over the next four years. In 1983 he squatted 845 in a squat training session four weeks before the national championships. At the time the world record in the 242 pound class was 871 and naturally Gallagher's plan was to attempt to break the world record at the nationals. The following week, in June of 1983, in a freak accident, Gallagher suffered a compound fracture of his left lower leg. He was incapacitated for 16 months. Two years after the accident, Gallagher officially squatted 804. However the stress of the effort loosened the plate screws holding his bones together. His "big league" powerlifting career was over.

Marty Gallagher would not compete for nine years. At age 42, he made a comeback as a "master" (over age 40) powerlifter. He went on to win six straight USPF national master titles in three different weight classes. He squatted an official 722 national record in the 220 pound class. Internationally Marty Gallagher competed in three IPF world master championships: Gallagher won the IPF world championships in the 220 pound class in Sydney, Australia in 1992. He won the silver medal in Montreal in 1993 and placed 3rd in the 242 pound class in Slovakia in 1993. He then retired. He came out of retirement at age 63 in 2013 to set a raw (no lifting gear, no lifting belt) national record of 450 squat weighing 205.

Since 2002 Marty Gallagher has worked in an official and ongoing basis with American Tier I spec ops fighters. He also works with members of the British Special Boat Service and the United States Secret Service. His minimalistic strength training approach has proven invaluable for time-pressed spec ops fighters and governmental field agents seeking to obtain maximal strength, muscle and power results for minimal time investment.

Marty can be reached through social media or at his website.