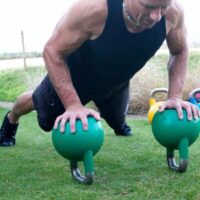 Mike trains whole-body fitness skills with the focus on functional training, specializing in kettlebells, Indian clubs, the mace, sledgehammer training, suspension training, battle ropes, med balls, sandbags, and bodyweight skills such as push-ups variations, chin-ups, Hindu squats, sit-outs, sprawls, as well as coaching on how to do handstands and headstands. The key emphasis is on fluid and efficient movement to improve your body awareness, your co-ordination and your sense of achievement. When the movements flow with full range of motion, this is where all the benefits come from. It heals, strengthens, and makes you better.

Mike has a passion for fitness and well-being and has been training for over thirty years. During the 1980s he competed in Judo to a high level and was a member of several elite Judo clubs. In the summer of 1988, he trained with the British Judo Squad in their preparation for Olympic Games in South Korea.

Today, at the age of 47, Mike is fitter and stronger than he was over 25 years ago. He has unstoppable energy and is showing no signs of slowing. Mike trains with kettlebells and bodyweight exercises daily and fuels himself with high-nutrient food, allowing him to smash through plateaus, rid himself of joint pain, and make him feel young again with new possibilities for his health, fitness, and vitality emerging daily.

Mike is the owner of Kick Ass Fitness UK and lives in a quiet village just outside Stratford upon Avon with his wife and two sons, who are longtime members of Stratford upon Avon Athletics Club and have competed in the UK Sportshall Athletics National Finals, winning medals representing Warwickshire.