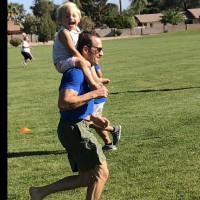 Peter Egyed started CrossFit Jan 2007 while studying physics in college. He started at the suggestion of a physiology professor and trained on his own. For two years he would continue to train on his own and compete in the first two CrossFit Games held in Aromas, California. Since that time Peter has now gone on to compete in a total of four CrossFit Games and opened an affiliate, CrossFit Fury. At the 2011 CrossFit Games, Peter acted as Coach to the Bomb Squad which placed 31st in the world.