I was born with left hemiplegia, a derivative of cerebral palsy. Growing up, I was constantly bullied for my disability, so I never had the confidence to aspire for greatness. In the summer of 2011, I was doing terrible in school. My parents had recently split; I was depressed, overweight, had no direction, motivation or purpose to my life. I hit an all-time low. But it was during that time that I discovered that pain in the gym made me feel better than the pain from a liquor bottle. I switched my major to kinesiology, and landed a volunteer internship as a strength and conditioning intern at Harvard-Westlake School. It was there, in January of 2012, that I met Coach Mike Tromello. I had never stepped into a weightroom before, let alone taught proper body mechanics or technique to anyone. After interning under Coach Mike (and despite his stern warning against it), I decided to pursue a career as a strength and conditioning coach. I began training with CrossFit, and working with private clients and collegiate athletes. I started studying the art and science of weightlifting, and the intricacies of programming for sports. At the end of the internship, in May 2012, I was rejuvenated and focused. I began coaching and interning with other coaches to gather different coaching perspectives and methodologies. I came to work with Coach Mike again in 2014, and have been working with him at Precision CrossFit ever since. 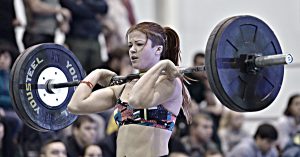 I Am Not an Adaptive Athlete

“Never get fat.” That was the advice of Dr. Saul Maurice Bernstein, the pediatrician who first diagnosed me with left hemiplegia, a form of cerebral