Close your eyes to learn more from every movement.

I played high school football in Bakersfield, California. Summers in Bakersfield are hot. To help avoid the heat, practice was scheduled at 5:30am and weights at 8am, by which time the temperature would already be 85-90 degrees Fahrenheit. Well-used steel plates, rusty squat racks, and bench presses were evidence of the hard work done and championships won over the last 15-20 years. A chain link fence was all that surrounded the history enclosed there.

The room was later upgraded and outfitted with aluminum siding and a swamp cooler. What was once open-air space was transformed into an oven. Temperatures regularly reached 115-120 degrees Fahrenheit, and going outside was like a vacation. Still, no mirrors.

The weight room upgrades continued as I left to play college football at Cal Poly San Luis Obispo, and then again as I went into the pros. The one thing missing all along were mirrors. I had visited public gyms and didn’t understand why the rest of the population was good enough for mirrors and we athletes weren’t. Why wasn’t I able to admire myself before, during, and after every set?

Fast forward a few years, and I now know seeing is not believing. Your eyes can betray you if you rely on them.

Public gyms all have mirrors, while sports team training facilities don’t. Why is that? [Photo courtesy Pixabay]

Think about when you learned how to walk or drive. Your brain had a limited capacity to attend to all of the stimuli being presented. It took an exceptionally high cognitive effort to complete what are now the simplest of tasks. However, with every new repetition, a stronger generalized motor program was being constructed. Walking transitioned into running. Your teenage self could now talk on the phone, change the radio station, roll down the window, and drive the car. But it took hundreds of hours of practice to attain this basic, conscious competence.

As an athlete, it takes thousands of hours of quality repetitions to reach the level of unconscious competence.

Dr. Richard Schmidt, responsible for creating one of the two major theories in motor control, defines a generalized motor program (GMP) as a pattern of movement that allows for adaptation of a specific movement to meet various environmental demands. According to Schmidt’s schema theory, each time you perform a skill, four things are stored in your memory:

These four pieces of information are stored within two subcomponents of Schmidt’s theory called the recall and recognition schema. Both subcomponents are connected, but differ in that the recall schema is used to select the parameters of the movement, whereas the recognition schema is used to evaluate the overall speed/force involved, and the way each movement felt, looked, and sounded.

Let’s consider how all this would factor into the kettlebell swing. During each swing, the recognition schema is compared to information provided by your proprioceptive ability to evaluate the efficiency of each repetition. At the end of every swing, an error signal is produced, and the GMP used for each swing is modified based on sensory feedback and knowledge of results. This revision of the motor program concept allows you to snatch and clean using the same motor program used for the swing. It also allows you to produce novel movements by changing parameters, such as overall speed.

The schema theory illustrates how important it is to take advantage of every swing. That way, when the time comes to manipulate the final position of the bell (as seen in the snatch or clean), the transition will be as seamless as it was when walking turned to running.

Neurologically, your swing GMP is created through practice. New impulses are sent from sensory receptors in your muscles to the brain stem and then back out to the muscles. With each repetition, it becomes easier for these impulses to travel along that nerve pathway, allowing you to swing more effectively. As you grow older and more experienced, your nerve pathways may reorganize and readjust to changing environments and health conditions.

So what does all this have to do with mirrors? Think back to the first time you laid your hands on a heavy kettlebell and attempted to swing. It probably looked like a rodeo cowboy tossed his lasso around you and pulled you forward like a rag doll. If you had closed your eyes during that first attempt, you probably would have fallen flat on your face in front of the entire gym. Or would you have?

There is some debate about head and eye position during the swing. The RKC manual cues you to focus your eyes on the horizon. At Cal Poly, we give our athletes two targets for their eyes. The first target is about two feet in front of their toes, and the second is just above their gaze across the room. This cue enables our athletes to keep the head and spine in a more neutral position.

Neither of the cues are incorrect, but a common issue seen with both is that we tend to focus too much on where our eyes should be, rather than the swing itself. This reliance on their eyes makes sense, because sight is one of the major contributors to balance. Maintaining balance depends on information received by the brain from three peripheral sources: eyes, muscles and joints, and vestibular organs. 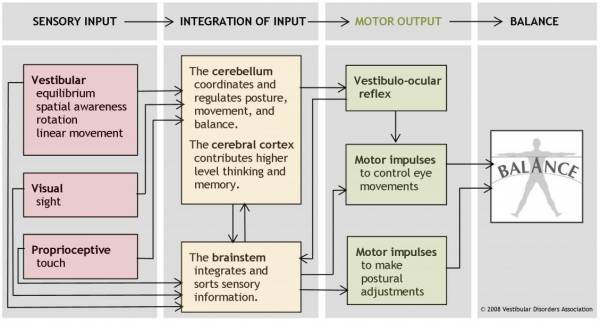 Over-reliance on visual cues can be a distraction from the lessons to be learned from the vestibular and proprioceptive systems. That’s why there weren’t any mirrors in the gyms at Bakersfield or Cal Poly. And that’s why you can learn better movement by not using your eyes at all.

What do you do when someone is relying on something more than they should? Take it away. Closing your eyes and learning to feel your body in space can be a great asset. A small towel or headband makes a sufficient blindfold to remove the eyes from the balance equation. The scene in Star Wars when Obi Wan Kenobi teaches Luke Skywalker how to use the light saber is a perfect illustration. Obi Wan blocks Luke’s eyesight and says, “Let go of your conscious self, and act on instinct. Your eyes can deceive you – don’t trust them.”

Taking away sight forces you to use the other main contributors. Proprioceptive information from the skin, muscles, and joints will be amplified, which makes you more aware of movement from the arms, legs, and other body parts during their swings. For example, if the bell pulls you forward during the swing, increased pressure will be felt in the front part of the feet, which causes sensory impulses to be sent to the brainstem. These impulses trigger postural adjustments that maintain balance. The sensory impulses sent from the neck and ankles are especially important. Proprioceptive cues from the neck indicate the direction in which the head is turned, while cues from the ankles indicate the body’s movement relative to the surface you are standing on (uneven, hard, or soft).

Training Without Your Eyes

I know what you’re thinking. “Chris, you’ve given me a lot of great scientific information and it must be important, but how do I use in my training?” I thought you’d never ask.

Master RKC Dan John wrote a fantastic article on kettlebell training, in which he notes that it is imperative to perform a test and retest to assess change. This is where the blindfold can be a valuable tool. Perform one Turkish get up (TGU) on each side with both eyes open, then apply your blindfold and perform another rep on each side. How did it feel? You probably noticed you moved with greater intent and focus so you wouldn’t drop the bell when you were blindfolded.

Here are some other blindfold routines you can try:

Beginner Workout 1: Alternate each set with your eyes open and closed.

Beginner Workout 2: Perform each set on the right arm and then the left arm. Rest as needed after both arms are finished and alternate each set with eyes open and closed.

Beginner Workout 3: Perform 3 rounds. Alternate each set of swings and squats with eyes open and closed. Rest as needed.

Advanced Workout 3: Perform 10 rounds. Program the rower for intervals: distance, your rest for 70 seconds, and damper at 7. The pace listed is what I use, which allows for a 1:1 work-to-rest ratio. Alternate each set with eyes open and closed.

Close Your Eyes for Better Movement

Give these workouts a shot, and you will notice a massive positive effect on the quality of your swings as well as the rest of your workout routine. There is a direct relationship between the muscular tension and strength gains, but you won’t be able to take advantage of this connection without body control. Take advantage of your body’s proprioceptive cues, and stop being blinded by your sight.

The Turkish what? How do I do one of those?

Movement Medicine: Breaking Down the Turkish Get Up

Coaches: Are you teaching your athletes to stare at themselves or know their bodies?