This winter I’ve treated more patients who have been injured, some rather seriously, due to slipping on ice. Sure, anyone can have bad luck and slip on a sleek surface, but you can increase your odds of staying upright if your brain and your body are communicating well with one another.

If you do fall, how you land will greatly determine if you get injured or not. I recently saw a guy who slipped on ice and landed on the back of his head. That was his first point of contact and obviously not a good one. He’s suffering symptoms of a concussion, which for many can last a year if not longer. Some people die from similar falls.

So to lessen your chance of sustaining an injury, I want to first discuss how to walk on any surface, and particularly on ice, and then what to do if you happen to fall.

Walk Over Your Feet

You may have heard to “walk like a penguin” on ice as this puts your center of gravity more over the foot and leg that your weight is being transferred to (often your front leg). This is good advice because it stabilizes you more and your leg is not way out in front of you with your body left behind. Otherwise, your leg will go more forward on a slippery surface and you’ll go behind, perhaps on your behind.

Think about how you should always be walking if you move naturally in unaltered fashion. Your feet should contact the ground closer to where your center of mass is rather than extended forward. Many people have poor gait mechanics, either due to or exacerbated by poor footwear, so their leading leg extends out too far and they strike the ground with the back end of their heel. There is little support doing this and if the surface is slippery, then you can quickly lose your footing.

As you may imagine, the footwear of choice in the winter is something warm, like a boot, and these often have a thick heel. A thick heel is going to make it so your gait is extended – your stride will be longer than what it normally should be. Many people walk like this all the time because they’ve always worn such footwear. Take your shoes off and see how far you extend your leg out to walk. It won’t be nearly as far as if you have some thick-heeled shoes on.

“A thick heel is going to make it so your gait is extended – your stride will be longer than what it normally should be.”

If you’ve read anything about barefoot running or minimalism, then you’ve heard that when you run you should land more mid- or forefoot, as opposed to on your heel. When you walk, it’s rather normal to touch your heel, but striking hard with an over-extended leg is not a good thing, especially if you’re on ice.

You should softly land on the heel and then nicely roll forward and push off from the big toe. This double-contact phase recreates the arch and adds power and spring. That’s a healthier gait than striking hard on the heel, flopping your foot down, and then using more energy to push off on the toes. Actually, many people don’t even push off correctly. They sort of pick up their foot and carry it forward again.

So, yes, walk more forward over your feet when on ice. But when not on ice, don’t walk so far back.

Move Naturally on Every Surface

I’ve discussed the benefits of being barefoot in a previous article. It’s an essential first step if you want to move well. If your foot is moving as intended, it sends an accurate message to your brain and will tell you where you are at all times. This is because the mechanoreceptors on your feet are firing properly as you move.

Mechanoreceptors are sensory nerve receptors that respond to mechanical stimuli, such as pressure, touch, and movement. You want as much healthy sensory stimuli getting to your nervous system as possible. Put on a shoe that alters these mechanoreceptors and your brain will get confused.

“You want as much healthy sensory stimuli getting to your nervous system as possible. Put on a shoe that alters these mechanoreceptors and your brain will get confused.“

If your brain gets confused then your proprioception will be altered. Proprioception is the sense of where your body is as determined by the conscious feedback it receives from muscular, tendon, and articular sources and the unconscious feedback from the cerebellum of your brain. Your cerebellum plays a key role in your motor control, so it’s rather important if you chose to move well. If you get car sick, for example, you most likely have some cerebellum issues. If you get dizzy while rolling on the ground and it takes a while to get your bearings, then your cerebellum is compromised.

So basically, if your foot moves poorly, then your brain gets confused and your position is compromised. This might not affect you too much until you’re on an unstable surface such as uneven ground or, of course, ice. 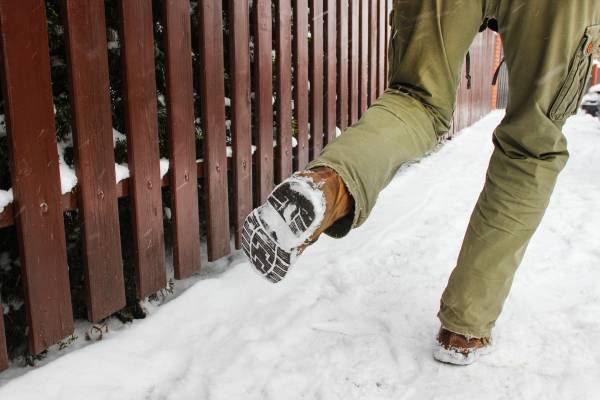 If your brain and foot are in precise connection with one another, you’ll definitely increase your odds of getting down your icy steps and across your frozen driveway. But, hey, sometimes sh*t happens – you just aren’t paying attention and you slip. When I think of this and talk to patients about falling, one of my favorite movies, Joe Dirt, comes to mind, specifically where he said, “My neck broke my fall.” Don’t be like Joe Dirt and land on your head or neck.

In MovNat, we teach how to fall properly. This may sound silly at first, but it’s a great thing to learn. The more you practice, then the more likely this protective movement will become second nature to you if you really do fall. So practice falling – it’s also some great eccentric conditioning.

When you fall forward, (not as likely on ice, but it does happen), you want to land with your hands close together in front of your face, palms down. The harder you fall, the quicker this movement needs to happen. If you get to the point where your face might become part of impact, then you should turn your face to one side. The way to practice this is on some nice soft grass while facing up hill. The steeper the hill the better to start – you won’t have far to fall. You can even start while on your knees.

“When you fall forward, (not as likely on ice, but it does happen), you want to land with your hands close together in front of your face, palms down.“

If you feel like you’re falling more to the side and not as straight forward, then definitely do not reach out with an extended arm. This is how people break their clavicle (collarbone) all the time. It’s a good way to break your wrist, too. Ideally, you lightly touch with your hand and then quickly tuck that arm under you – way under your body – and roll to the back of your shoulder. So you’ll either roll some or land on your back.

If you fall backward, which is most common on ice, the first thing to do if you only do one thing is tuck your chin and keep your head up. This requires some neck strength. Strengthen your neck by lying on the ground, lifting your head, and holding it there for twenty to thirty seconds at a time. Also, as you fall backward, you will want to slap both your hands and forearms to the ground to help dissipate the shock of the impact – palms down and forearms flat. Your shoulders should stay off the ground, too, along with your neck and head.

Next month, I will discuss another important aspect of walking and moving well – your ankles. The stronger your ankles, the less likely you will be to tumble down.

Dr. Steve Gangemi is a chiropractic physician in his seventeenth year of practice in Chapel Hill, North Carolina. He specializes in holistic therapies for patients dealing with a variety of ailments such as hormonal imbalances, digestive disturbances, immune dysfunction, and musculoskeletal problems. His practice focuses on helping his patients move better and live healthier lives. He's barefoot in the office all day long.

Dr. Gangemi conducts Training & Treatment Workshops in the U.S. and Europe focusing on Natural Movement and MovNat principles for athletes seeking to improve performance and heal up injuries. Dr. Gangemi is a frequent contributor for Paleo Magazine, a Level II MovNat Certified Trainer, an amateur beekeeper, and a father of three often-outside and shoeless children.