Can You Hula Hoop Your Way to a Better Core?

Strangely enough, I am not the first person to ask this question.

The hula hoop. It was much more popular when I was a kid, but it’s still around today (no pun intended). Check out the First Lady of the United States hooping it up:

I consider the hula hoop to be a simple activity device, but can it be used as a viable means of exercise? Strangely enough, I am not the first person to ask this question.

What Science Says About Hula Hoops

Core endurance training ideas and inventions are continually being created. But do they work? Some do and some don’t. That’s where the researchers enter. Their task is to study the mechanism of action and evaluate their potential as a training tool. So Dr. Stuart McGill led a study to determine if a weighted hula-hoop training program improved core muscular endurance and measures of body composition.

The length of the test was six weeks. Five workout sessions were performed each week consisting of one group class and four at-home sessions. The group class protocol used a hooping time progression beginning from 2:00 on the first day and working up to 15:00 on all five days during weeks three to six.

The at-home sessions were 25:00 in length, broken down into seven segments. Segment one was a dynamic warm up, followed by five varied-time segments of hooping only or hooping combined with other exercises. The last segment was a cool down using static stretches.

Participants were instructed to maintain all other habits and behaviors outside of the hooping sessions and other routine training during the study. This was done to assure any changes in measured variables would be a direct result of the weighted hoop-training program.

The researchers hypothesized the hula-hoop program would improve core endurance and decrease core body fat and waist-to-hip girth ratio. The results both proved and disproved the hypotheses. 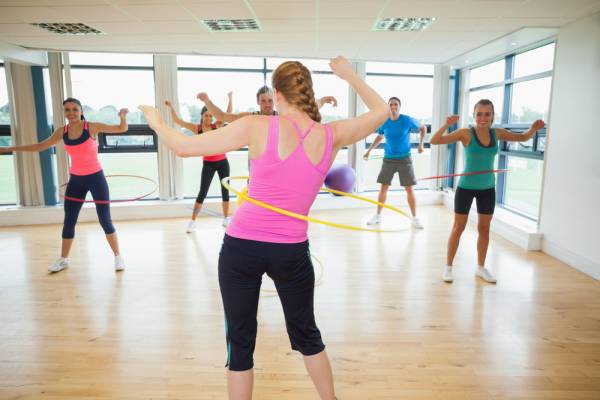 So, can you hula hoop your way to a better core? Is it deceiving because while the hoop rotates around the core, in reality the actions of hula hooping are ankle-knee-hip generated?

This study suggests a six-week program of weighted hula hooping correlated with decreased waist and hip girth combined with a relocation of body mass. But there were no improvements in core muscular endurance as calculated by isometric testing.

If you’re seeking a better core, my advice is to focus on time-proven core-strengthening exercises and a proper diet. If you want a new recreational pursuit, get yourself a hula hoop and impress your friends.