Catching the Bounce, Part 2: The Jerk

Just as in the clean, we now have another opportunity to take advantage of the springiness of the bar in order to complete the lift. Here’s how you do it.

Okay, so now you have completed your clean and you caught the bounce just right on the springy bar. That bounce helped you climb out of the squat. You are now standing erect, the bar is racked on your shoulders, and it is time to jerk. Just as in the clean, we now have another opportunity to take advantage of the springiness of the bar in order to complete the lift.

A little attention to the rules is required here, especially with a springy bar. After the clean and before the jerk, you will have to make sure of the position of the bar. I won’t go into all those details now except to ask you to consider that the bar may still be oscillating after the clean. Remember these bars are very springy and elastic and the weight was heavy. You cannot take advantage of the bar’s springiness at this point in the lift. According to the rules, you must wait for the bar to stop its oscillation before you can attempt the jerk. Don’t move, so that the bar can settle down. The sooner it settles, the less energy you will waste.

In the execution of the jerk, however, things are different. There you must fully utilize the spring in the bar in order to get the heavy weights up. This is especially important if you had a difficult clean and a lot of energy has been spent on that portion of the lift.

This springiness will be utilized when doing the dip for your jerk. This is where you bend your knees to about the depth of a quarter-squat. The dip starts when you bend your knees. This part accelerates for a few inches. Then you have to put the brakes on. The dip stops abruptly at the bottom of your quarter-squat and immediately you change direction, driving the bar upwards out of that dip. At this point the bar will be exerting the most force on the lifter. It will be moving downwards with somewhat more force than just its gravitational weight. This imparts another bend in the bar. This change of direction is done as quickly as possible. 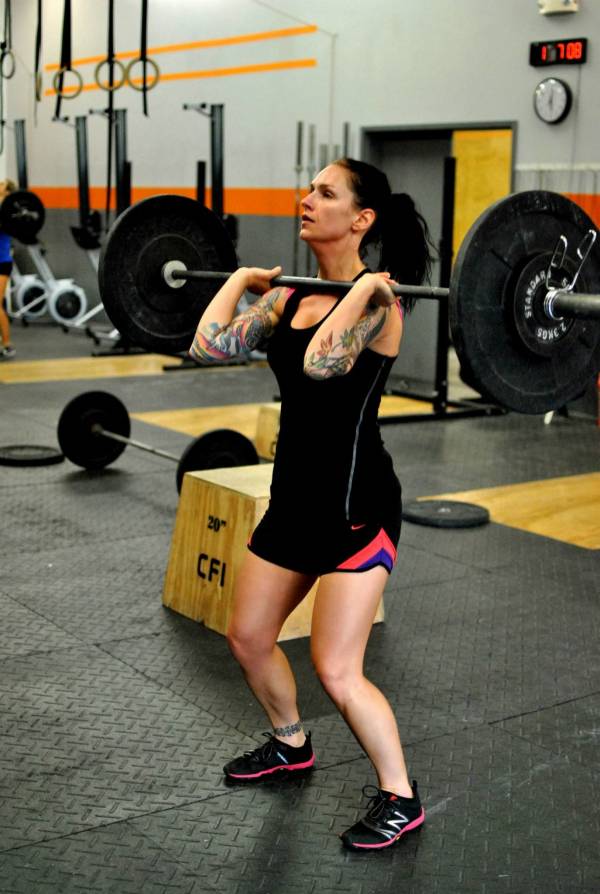 You must have a lot of strength in your legs to overcome the weight of the bar and start the upward jerk drive. This drive should start just as the bar is starting the unbent part of its cycle. When the bar does that, it exerts less downward force on you, the lifter. This will be a help to you when driving upwards. As the bar completes its upward drive you simultaneously start your drop under the bar. Very quickly, you split your legs and push your body downwards from a bar that is still rising. Continue until your arms lock out.

At the time of lockout is where things get complicated again. As the bar is locked out, there will be an immediate small amount of amortization under the bar as the split legs absorb the force of the bar coming down on the lifter. At that same time the bar will experience another bend as the bottom of the jerk is hit. This is called “jerk kickback” and it does not help you. This is a pivotal point where is the bar bends. Remember the bar is again exerting more force than its actual weight. You have to be strong enough to control the bar in this situation. If you cannot, you may not be able to hold the bar in position and you will then have to drop it. No lift. You will have to repeat.

So, let’s assume you catch the bar and you got your arms nicely locked out. Now you have to get out of the split. You still have opportunity for problems. As you are moving your legs into the finishing position, you have to remember that the barbell is still bending and re-bending. And each time it bends it adds a little bit of extra force that you have to deal with. This is especially important to consider when you take a step in recovery while the bar is bending downwards. Your base of support is compromised at those times so extra control is needed.

Just like in the clean, each re-bend is a little bit less, but still the sudden extra force when the bar changes direction can be enough to put you off. If you are not alert to its existence you will often lose a lift to kickback. This is all important to remember, especially when thinking about the fore-aft position of the bar. Any bar that is not directly over the lifter’s area of balance is going to be even harder to control when the bending occurs. You have to try and get that bone-on-bone positioning. 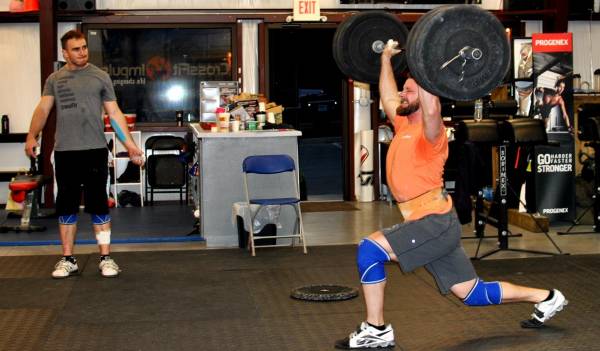 All of this is also of significance with regard to the weight of the barbell. The heavier it is, the greater the bending and re-bending will be. While it is true lighter lifters at the elite level have a greater proportion of barbell-weight-to-bodyweight, they do not have the same problems with oscillation and kickback that larger lifters have. This is because even though the lighter lifters are trying to control a weight much heavier than themselves (two to three times as heavy), they are still not lifting as much actual weight on the bar. When it comes to bar bend it is the absolute weight of the barbell not the relative weight of barbell-to-athlete that is most significant. The big lifters are lifting more absolute weight even though it is not so heavy in proportion to their bodyweight. The big fellows have to be much more aware of how much their bar is bending during the jerk.

In conclusion, it has to be realized that there is an art to lifting heavy weights. In addition to strength requirements, the successful lifter must be aware of metallurgical conditions in order to get the best performances.