For years Olympic weightlifting people were most desirous of a loosening of the age-old press-out rules requiring that all snatches and jerks be locked-out cleanly and completely. The bar could not be pressed-out at the top if it did not travel all the way there cleanly during the active part of the lift. Many were hoping to see an allowance for some press-out. Watch this video for an example of a press-out:

But the “whigs” were not to be satisfied in that regard. The “tories” continued to hold the day with clean finishes still required. The new IWF Technical Officials Rules and Regulations for 2013-2016 have now been published. Lifters, coaches, and technical officials have by now downloaded them from the IWF website and perused them for any changes. While the format of the book has changed a bit and some rules have been subject to minor language alterations, there were few changes in the lifts themselves.

There was, however, a clarification to the press-out rule that will provide some satisfaction to both sides of the issue. This concerned the basic definition of a press-out. Such is now defined as any movement in the elbow joints that occurs after the lifter’s lowest point in their squat or split made while going under the bar. This will indeed make it easier to argue that a press-out has been made, now that a definition has been formulated. Elbow movement before the lowest position will not qualify as a press-out. This will not be problematic as long as the squat or split under is done quickly and smoothly.

We may now ask ourselves, why do these rules exist in the first place? One reason is aesthetics. A lift sent to arms length without any monkey business just looks better. It also feels better to the lifter. If we look at many of the other Olympic sports we can see that technical execution has improved tremendously over the years. We see quads in figure skating, more daring gymnastic moves, fantastic basketball techniques and I’m sure those in other sports can give examples that will confirm this trend. For that reason I would not like to see Olympic lifting take an opposite tack. Why allow sloppier performance techniques when the world is going in the opposing direction?

Coaches speak out in favor of looser rulings, especially if they have a star lifter who has problems finishing his or her lifts and opponents who don’t. I have also noticed that a few years down the road, when the lifting shoes are on the other foot, the same coaches will complain about others who got away with press-outs when their man lifted strictly. Their position on press-outs is not so much based on principal but on expediency, i.e., what will work for us today. I can sympathize with the athletes though, especially if they cannot lock properly, causing clean finishes to be difficult.

If press-outs were to be allowed one would eventually see that records or championships made without press-outs would still be accorded more legitimacy than those where the last few inches were muscled out. This did happen with the press. I would not want that to prevail if looser rules were to come.

Many say that since a press-out requires more strength than a properly completed lift this should be positively recognized by allowing such lifts to pass in competition. To that I would have to agree that more pushing strength was needed in such lifts, but accordingly snatch pulling strength and jerk drive strength was insufficient if the lifts needed the press-out. What is gained in one is missing in another. Why reward any lift made with a style that was unintended by the rules of the lift?

Many of those in favor of strict finishes point to the 1972 abolition of the Olympic press to support the idea that allowing more liberal rules will lead to greater and greater laxity. The press was abolished because refereeing it became more difficult as the lift got looser. To play devil’s advocate, I do not think this will happen. Those making this argument fail to see the motivations involved. With the old press, definitely one could lift more weight the looser the press became. Therefore there was a temptation to cheat a little bit more to lift a little bit more.

With the snatch and jerk we have a different situation. The way to lift the most weight is without a press-out, by lifting according to the rules. The only time a press-out is done is as a last resort to save a bad lift. Lifters will not cultivate press-outs like the cultivated fast and loose presses back in the old days. A perfect snatch or jerk is still the best way to lift a limit weight. Those with good arm lock, the vast majority of lifters, will still try to lift with no press-outs. But occasionally they will try to save what should have been a dropped lift. This is where another reason comes in. 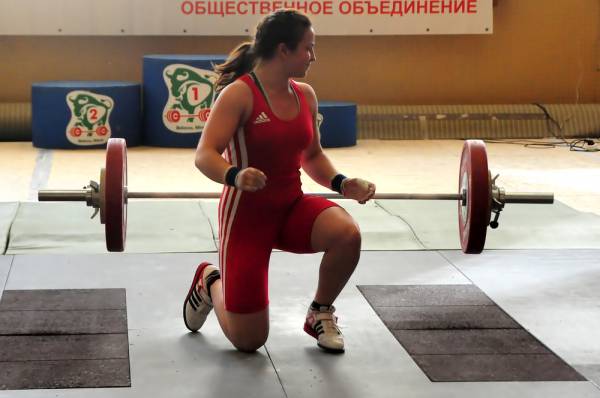 That reason is the medical one. Trying to save a bad lift can be dangerous with limit weights. I once saw a lifter try to save a borderline jerk by pressing out the bar. The result was stretched elbow tendons, damaged while trying to save the un-savable. I believe that allowing press-outs will encourage lifters to fight attempts that are better left to crash to the platform. If this lifter had let go of the bar when things went off the rails he would not have ended his career so soon.

If we loosen up “a bit” on this rule it will be very hard to adjudicate borderline lifts. Strict lifts are much easier to adjudicate. I know, even strict form lifting still has a borderline area. But at least if a refereeing error occurs, or if a lifter tries too hard to save a bad lift, the lift will still be closer to the acceptable. The basic idea is that snatches and jerks are accomplished by driving the body under the bar, not by driving and pressing the bar over the body. However, there will still be borderline lifts that need a decision by the referees. Not all will be satisfied with their interpretation.

It remains to be seen how the newly clarified rule will work. We will see over the next four years. I do think a start is being made and look forward to sitting in the referee’s chair for the next quadrennial.