It’s amazing how many studies have discovered the dangers of the chemicals used in diet beverages. From an increase in diabetes to more body fat storage to a higher risk of stroke and dementia, diet beverages can be detrimental to your health. Though they’re marketed as diet (and thus perceived as healthy), they are a food you should try to avoid as much as possible.

A new study from the NIH provides one more danger to add to the list: women who drink diet soda while pregnant raise their child’s obesity risk.

The study, published in the Journal of Epidemiology, examined the effects of diet soda versus water on the health of children born to mothers with gestational diabetes during pregnancy. When mothers drank diet soda during their pregnancy, the children had a 17% higher risk of obesity by the age of seven.

After using data collected from more than 91,000 Danish women, the study used data from just 900 cases of women suffering from gestational diabetes. Of those women, roughly 9% consumed one artificially sweetened diet beverage each day. Their children had a 60% higher risk of a high birth weight (indications of a higher obesity risk) than the mothers who didn’t touch diet drinks. The risk of their child becoming obese by the age of seven was 50% higher among the diet soda-drinking mothers.

What is the link between diet drink consumption and obesity? The zero-calorie sodas may affect the gut bacteria or may cause the intestines to absorb more glucose than normal. There are also indications that high sugar consumption (especially artificial sugars) can desensitize the digestive tract and thus prevent fullness, leading to higher overall calorie consumption. 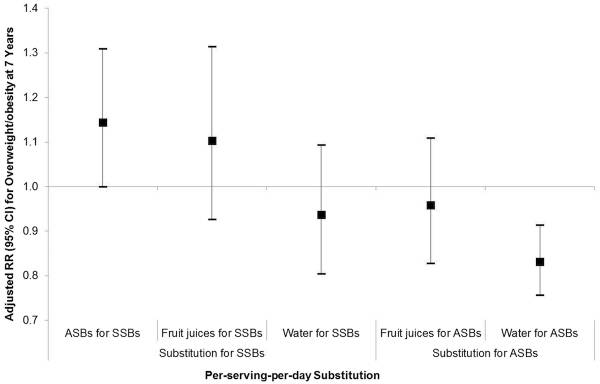