Core strength is important for the transfer of power from one part of the body to another – especially important in a sport like judo. Here’s a program I recommend for building core strength for judo.

After getting feedback on my last series of articles, Strength Training for Judo, I had quite a few comments. One of the best questions I was asked about the series was, “What about core training? Your articles seem a bit light on it.” Well, so be it. I understand that for some people, core training is of key importance. So, let’s get into it: core training for judo.

The core is perhaps one of the most important and least understood parts of the body. For simplicity’s sake, let’s break down the core into four main functions. Now honestly, the four functions will tend to overlap quite a bit, but that’s okay for economy of training’s sake.

While you can also create a fifth category of “anti-” movements (anti-rotation, anti-flexion, etc.), really what you are talking about is a flexion of the antagonist muscles that resist the undesired movement. If you want to “anti-rotate” against a force on your right side, you flex the rotational muscles of the left. If you want to “anti-contract” the body, you flex the extension muscles. While it sounds complicated, the reality is that “anti-” training has been as natural to the body as walking, ever since you were about two years old and stopped waddling around in diapers.

So, let’s look at the four main functions:

For stabilization, a lot of your training should be accomplished from heavy basic lifting. A steady diet of heavy squats, deadlifts, rows, and bench presses will accomplish a lot of the needs for stabilization. If you want to get funky, farmer’s walks, suitcase deadlifts, one arm presses, and others will even add a rotational stabilization element into the mix. Honestly, I feel for most judo players, normal lifting and practice will more than take care of stabilization needs, unless there is a weakness or a prior injury to deal with.

For contraction, variations of crunches, reverse crunches, and even situps are great. I personally love to do a variation of V-ups using a suspension training rig on my ankles. Start in the position pictured to the right, then push your butt up in the air as you pull your knees to your chest. If you want a real tough challenge, try doing this without bending the knees, and just “v-ing” the body. 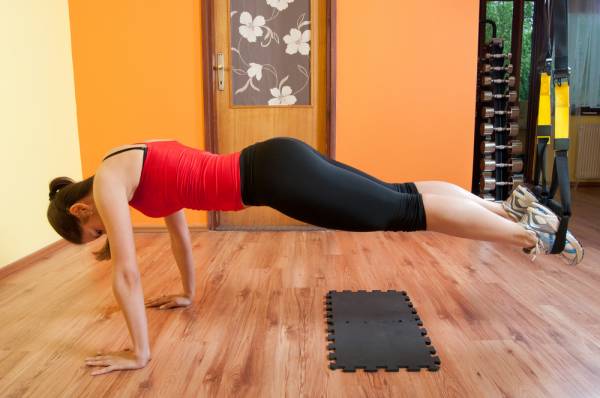 The debate among coaches for how much contraction training is needed withstanding, I have found a decent amount of contraction training does have a beneficial effect for players, especially if their club is light on ground work. Finally, since extension is such a vital part of other movements, I find the balancing effect of doing at least some contraction training helpful for alleviation of low back pain caused by overly tight extensors.

For extension, a lot of training should be interlaced with your low back training. Hyperextensions, deadlifts, Romanian deadlifts, and other movements form the basis of my programs for the glutes, hamstrings, and low back. If I haven’t covered my extension enough there, I have serious problems.

Finally, we have rotation. There are a ton of exercises that can be done for rotation. Almost any contraction exercise can be turned into a rotational exercise by twisting the body or knees to one side while doing the rest of the contraction. As specialized rotational exercises, resisted rotations and “broomstick twists” are classics. For resisted rotations, it really doesn’t matter if you are doing a low-to-high reverse chop, a high-to-low chop, or a level rotation, the main concept is the same. For the motions of judo, I tend to favor high-to-low chops or level rotations over low-to-high reverse chops.

The Program and Scheduling

Because the core is used in so many parts of other movements, and because the core muscles themselves are used in almost every moment of our lives, the core tends to be very slow twitch in its composition. This doesn’t mean, though, that you can only train it using high rep exercises. We’re not training Abs of Steel here. We’re training force generating and force transferring blocks of power, and as such, heavy training will be a component of core training for this program. The keys here are heavy weight and relative frequency.

Secondly, unless you want to take a whole day and do nothing but core training, I seriously recommend splitting up the core into its main functions and focusing on only one of those each training session. Since stabilization and extension are key components of other workouts, that means you really only have to focus on contraction and rotation as targeted training.

Thirdly, because you are trying to minimize the risk of injury, I recommend not doing the core before a heavy lift, or a heavy randori session. Save it for the end, or at least a day where you won’t be overly taxing the core the next day. This means if you are doing heavy squats on Tuesday, thrashing your extensors and stabilizers on Monday is rather foolish (unless you like slipped discs).

So, let’s look at what we can do. This assumes you are already training stabilization and extension through other lifting sessions, and are looking to augment in order to bring up a weak point in your game. We’re going to do two main workouts, one contraction based, the other rotational based. As my normal lifting plan calls for two leg workouts per week, this is a great time to add in the core, after you’ve thrashed the legs.

Most of the exercises listed here are going to be straight line contraction. If twisting throws are a very integral part of your judo game, you can tweak this by using twisting versions of the exercises to tailor it to your needs.

Again, the focus of this is rotational training. While I prefer to use latex bands for the resistance here, that is mainly a personal choice. My gym doesn’t have a cable stack or Freemotion trainer or anything of the type. Since bands are cheaper, more transportable, and more flexible than a cable stack, I’m happy. But, you can choose as you like.

Q: What about Landmines, or slide boards, or Turkish get-ups, etc?

A: Hey man, whatever floats your boat. Just as I prefer to use bands over cables, there are people who feel they get a better flexion and workout out of using landmines instead of chops. I’m not one to say don’t do an exercise you like, as long as it’s not unsafe or just flat out retarded.

Q: What about anti-rotation?

A: As I mentioned above, anti-rotation is actually quite automatic for most people. However, if you feel the need for some extra, try holding your position at the beginning or end of the rotational movements for an extra beat before you move the weight.

Q: What about the throwing motion? How would you train the core for that?

A: Most throws are actually a combination of contraction and rotation. For example, to finish a right handed o-goshi hip throw, you will most likely rotate your shoulders from your right side to your left side (roughly counterclockwise) while at the same time bending forward and contracting there. If you’ve trained the rotation and the contraction, the muscles will be there and be strong for when you train the motion in practice.

Q: Are there any judo-specific sports based exercises I can do?

A: To quote Liam “Taku” Bauer, another Breaking Muscle author, weight room movements do not 100% carry over to the playing field for numerous reasons including the laws of physics and physiology. You train the muscles to get stronger, then train the sport specific movements during practice. However, if you insist, you can try this one that I have enjoyed (don’t think it particularly was more effective than the other movements I have done, but it was a nice little exercise): Take a latex band and loop it over the top bar of a power rack or other fixed point above your head. Turning your back to the anchor, take an over the shoulder grip on the band like you would if you were doing an ippon-seio nage. From there, crunch forward while twisting, as if you were finishing the throw. Just try to remember to do the same number of repetitions on both sides, even if you tend to favor one side for the real throw.

Well, that’s it for now. Enjoy and ganbatte (do your best)!