“I’ve hit a plateau and my strength numbers have been stuck for months. What should I do?”

I get this question a lot.

Don’t let anyone tell you that you’ve hit a plateau because of your body type or genetic potential, because that’s simply not true. Just take a glance at any high-level powerlifters or Olympic lifters and you will understand what the human body is capable of.

Here’s the ugly truth. If you’re not following a well-structured program, chances are that you’re going to plateau sooner or later. When it comes to absolute strength, I’ve found that if an average CrossFitter hits a plateau, it almost always stems from poor programming.

If you’re not following a well-structured program, you’re going to plateau sooner or later.

Diversity in CrossFit is a blessing and a curse. Focusing on one element can be challenging with so many different things to train. You want to get a bigger squat, a bigger snatch, a faster 2k time, and a quicker Fran – all at the same time.

This is definitely doable. If you tackle all energy systems simultaneously, you can make progress, depending on your athletic level and quality of the programming. But if you focus on one element and stick with it until you get it up to the required standard, your progress will be much faster.

If you want to get stronger, you have to focus on strength work. Take 2-3 months to do a strength cycle focusing on your weakest lift, and you’ll make tremendous gains. Doing a lot of metcons and work capacity training while on a strength cycle is a common reason for plateaus and lack of progress, so make sure you tone these elements down or eliminate them completely.

Use Tried and Tested Protocols

There are many ways to prescribe an effective strength cycle that are beyond the capacity of this article. As a simple recommendation, stick to Prilepin’s chart when programming for strength. If you don’t know much about Prilepin’s chart, I advise you look it up.

I’ll give you four strength workouts from my good friend and mentor Bobby Maximus at Gym Jones. These time-tested workouts are based on Prilepin’s chart and will work for the following movements:

The workout formats are:

The first workout places the least demand on the CNS, which causes less fatigue and risk when it comes to injury. On the flip side, you’ll probably make the least amount of strength gains when doing workouts that look like this.

This balance of risk and reward is turned on its head by the time you get to the bottom of the list. The final workout is demanding, will fatigue the CNS, and carries an increased risk of injury. However, you’ll probably make the most strength gains when doing strength workouts in this format.

Tricks of the Trade

The above formats show what the main lift of a well-planned strength workout should look like when paired with relevant percentages. But remember, these workouts are by no means all you should be doing.

In order to break through your sticking point in your next strength cycle, I recommend the following: 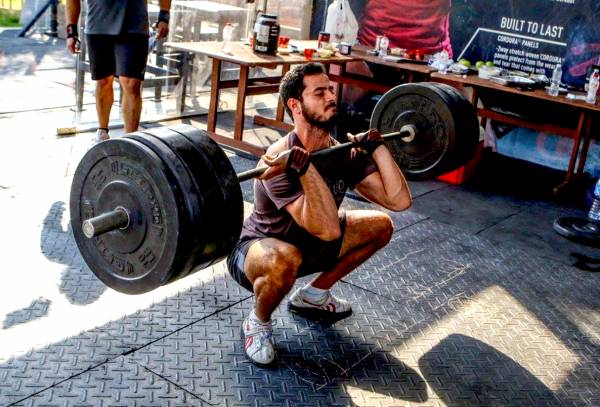 Raw strength is at the base of the strength pyramid.

Raw Strength Is the Root

Absolute, raw strength is at the base of the strength pyramid. Give me an athlete with a high level of absolute strength, and I can increase his or her strength endurance, power endurance, and competition readiness in no time. Give me a weak athlete, and this same process will take a lot longer.

We all love CrossFit because of the variety it offers. But a CrossFit athlete who wants to get stronger must focus on the specifics of getting stronger. The more advanced the athlete becomes, the more this principle applies.

Put variety aside until you put that plateau in your rear view mirror.

In 2010, Ramy Saleh founded CrossFit Stars, the first Egyptian CrossFit affiliate ever to open its doors to the public. Ramy has been labeled as “The Godfather of Egyptian CrossFit” by the CrossFit Journal as he introduced CrossFit to the country and has since coached several of the Egypt's best CrossFit athletes and coaches.

Ramy has acquired numerous strength and conditioning certifications, but he is most proud of being a fully certified Gym Jones Instructor. Ramy credits most of his success as a coach to his mentors and learnings at Gym Jones.