Coconut water has made a huge splash on the scene; the American, athletically-minded scene that is. For more than a year, the number of coconut water companies fighting for space on a Whole Food’s shelf has exploded. I counted ten different companies the last time I was there – a half hour ago.

But we’re late to the game. South Asia, the Caribbean, Hawaii (pre-U.S.), and South America, to name a few, must all think we’re adorable to have found this “new” health fad. Some raw foodies have been using young coconuts for many, many years. The first documented use of coconut water dates back a few centuries, though most likely it has been used for much longer since coconut palms are believed to have been around thousands of years.

The health benefits of coconut water are highly touted. And we’ve tucked these facts under our arm and run with them because we desperately want a natural sports drink besides water. We don’t want to believe that a neon red, electrolyte-enriched sugar bomb is our best option. But more than that, we want it to be refreshing and delicious, and on this I have to defer to the islanders and half the planet by saying that nothing beats a fresh young coconut. The cans and cartons of coconut water don’t even come close.

The white, cone-head nut now seen in health food stores is what I’m talking about.

The pristine liquid hidden inside will blow your hair back. The meat of the young coconut is also very delicious. It’s soft, gel-like and it’s an amazing, creamy base for shakes and other recipes. The younger the coconut, the more translucent the meat is. It’s almost purple. As the coconut ages, the meat hardens. An old coconut is covered in a dark brown husk with very hard meat inside.

You could conveniently grab a couple young coconuts from Whole Foods at up to $4 a piece, but you will find them much cheaper at a Thai market. If you live in a big city, you most likely have a Thai market tucked away in a neighborhood not far from you. If not, I would check an Indian or Asian or even Latino market for availability. If this is not an option, you might be able to get a discount for buying a case at a health food store.

Once you have your coconut, the next big obstacle is how to open the damn thing. Here is a tutorial:

1. Put the young coconut on its side and start cutting the top, pointed husk off with a sharp knife. A regular sharp chef knife is cool. You don’t need a machete, cleaver, or hack saw.

2. Cut away as much of the husk as possible until the nut is crowning. The spines of the nut should be bare, like this. 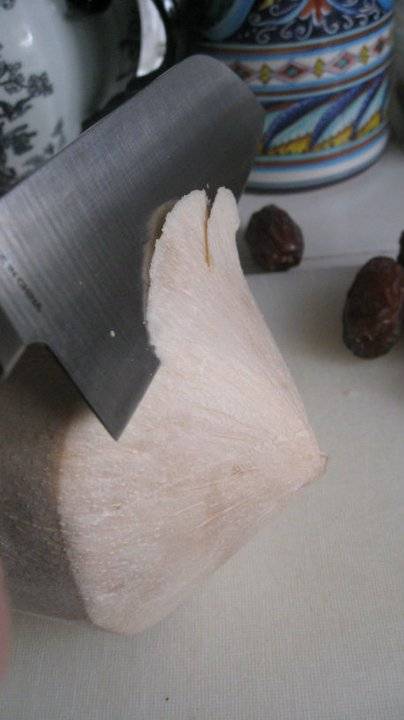 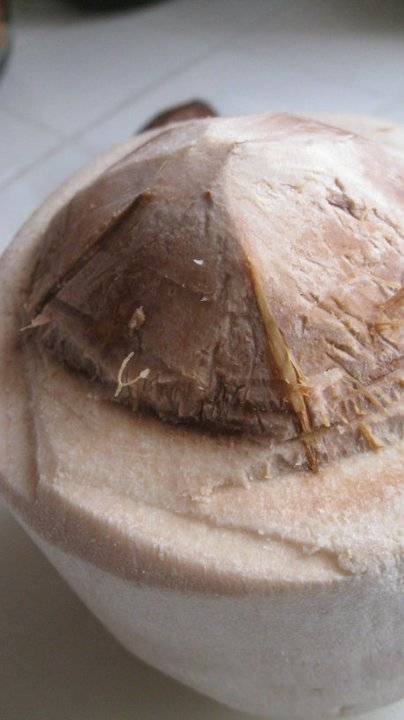 3. With the bottom edge of your knife, come down pretty aggressively at the base of one of the spines, creating a good cut in the shell all the way through. Good eye-hand coordination is probably useful here, but you’ll get it. Just keep your free hand out of the way, will ya. Repeat at the base of all the spines. Do the same in between the spines, at the base, until the top of the shell feels loose. Drain a little water into a container if it starts to splash while you are opening.

4. With your fingers, you should be able to pry the top up. Keep prying – it’s like nature’s coconut hat. Or pop top? Maybe like a tupperware lid. You get the idea. 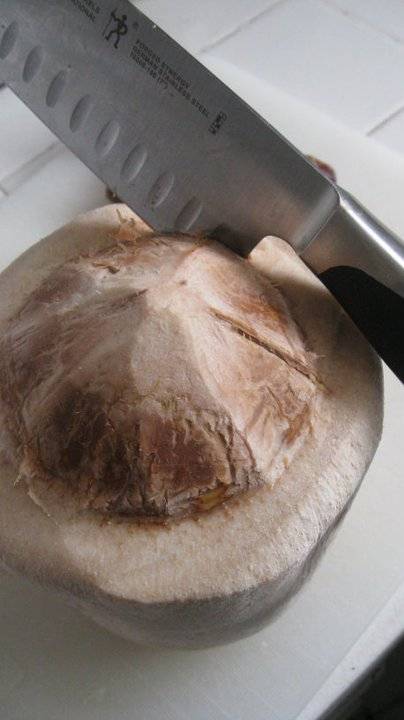 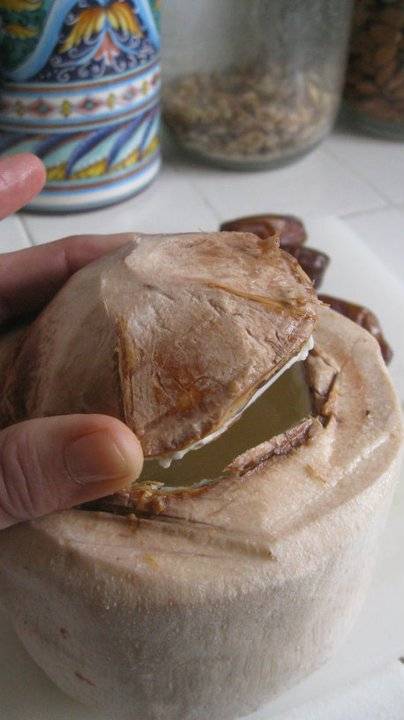 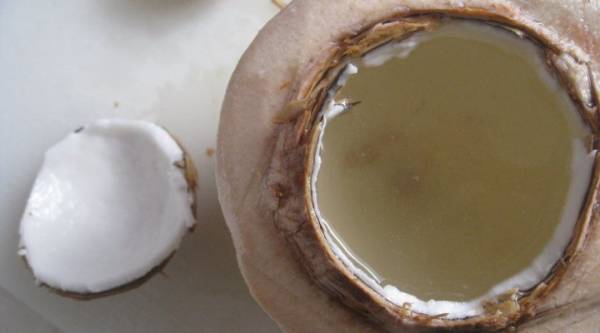 5. Ta-da! Filled with yummy water minus many shards of shell like if you were to take a hammer to it. You can stick a straw in it now and call it a day or you can go on to make many delicious things. 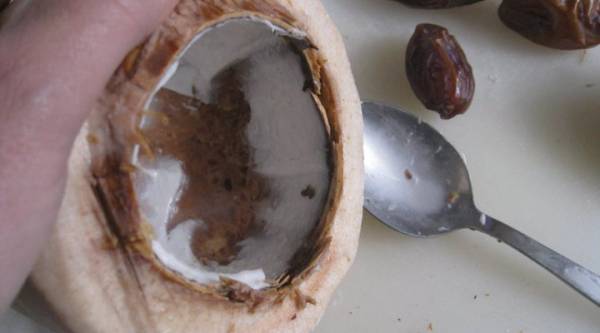 6. If you want to use the meat and water for a recipe, first scoop the goodness off the “nature hat.” Or pop top. Whatever. Then scoop the meat out of the main cabin. Mmm.

Put the all the water and meat in a blender. Add 2 spoonfuls of raw almond butter or about a ¼ c. of raw almonds, though I recommend the almond butter. Add 5 fresh, pitted dates, a half cup of water and about 4 ice cubes into the blender. Blend until smooth. At this point I usually put about half in a jar to save for the next day because this recipe will serve 2-4; for me, 2. With the half still remaining in the blender, add about 6-8 ice cubes and blend really well. The consistency will be like soft ice cream. Sometimes I top the shake with a couple chopped walnuts and/or almonds, a few goji berries, a couple shavings of dried coconut and a couple cocoa nibs. This shake will knock your socks off.

Here’s a recipe for my delicious Raw Coconut Thai Soup, which serves 3-6:

Grind together in a coffee grinder: 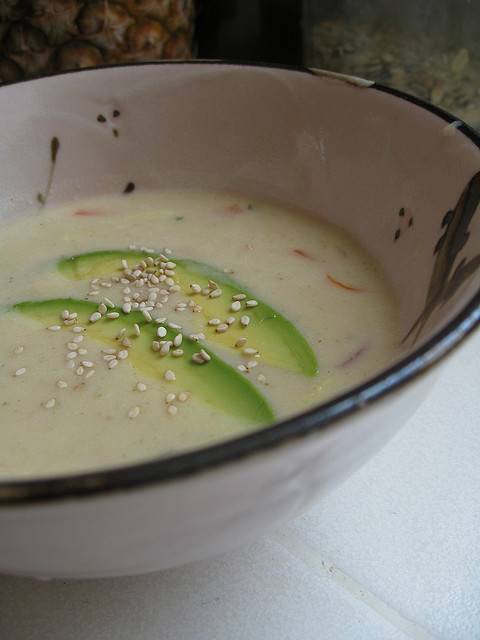 I feel it responsible to tell you that there is an ongoing argument about the chemicals used to preserve imported young coconuts. Many believe formaldehyde is still used – formaldehyde! – and though this is still speculative, there is most likely some sort of pesticide on non-organic coconuts.

I personally haven’t stopped buying them, which I’m a bit torn about, but organic coconuts are hard to come by and very expensive. I also like to tell myself the sterile water at the center of the nut that’s protected like Fort Knox is not affected much. This may not be the case. That said, the majority of coconut water flying off the shelves is non-organic, meaning we could be drinking formaldehyde juice anyway, just in can, just not as delicious. It’s hard to tell right now. In the meantime, I will continue to enjoy young coconuts as a refreshing recovery drink and as an amazing base to many recipes.