After the birth of my second child, I had some serious complications that kept me in bed for six weeks. That period of immobility, combined with the pressure of pregnancy and a cesarean section, left me with significant abdominal weakness.

It took me about nine months to realize there was a lot more going on than weakness. One day, while doing one of those typical “Mom wants to get her belly back to normal” ab routines, it dawned on me that I should probably check to see if my abs were still separated. Sure enough, the six-pack ab muscles I had been so proud of regaining after my first daughter’s birth were long gone. In their place, I was left with a gaping abyss that could easily accommodate my entire fist. Sure enough, the doctor diagnosed diastasis recti.

Here’s the Web MD definition of diastasis recti: “‘Diastasis recti’ means your belly sticks out because the space between your left and right belly muscles has widened. You might call it a ‘pooch’.” (Disclaimer: That’s a really bad definition. Read on for a better one. But it was about the extent of my own knowledge at the time.)

I was surprised that diastasis recti could happen to me. I always had defined ab muscles and prided myself on my ability to do hundreds of crunches without suffering much the next day. Little did I know, athletic people with ripped abs are just as prone to DR as sedentary people.

Diastasis Recti and the Body Ecosystem

Nowadays, a Google search for “diastasis recti” will produce pages of conflicting and confusing results. But back then, there wasn’t much information out there about diastasis recti. So I was fortunate to discover the work of Katy Bowman, founder of Nutritious Movement and director of the Nutritious Movement Center Northwest in Sequim, Washington.

Katy’s approach to dealing with diastasis recti – among other common problems – made so much sense. Her blog, Katy Says, was a goldmine of information about whole-body alignment and how biomechanical factors contribute to diastasis recti. So when I heard in fall 2015 that she was releasing a book all about diastasis recti, I was beyond excited. Sure enough, the book surpassed my expectations.

Diastasis Recti addresses this common issue from the perspective of forces. As Katy notes in the Introduction, “If you don’t know about the forces, and specifically how you can create forces that pull your abdomen open, then how could you possibly stop creating a DR?” The book delves into the forces that are at play in the development of DR, as well as how to leverage those forces in your favor to help restore the muscular imbalance that results from it.

I had the opportunity to ask Katy a few questions about her approach to diastasis recti, particularly for athletic populations. First of all, Katy addressed how diastasis recti can be common in athletic men and women, despite the idea that these individuals may be considered “fit”:

I believe one of the reasons diastasis recti persists in very fit people is because of this notion that it’s only the hardest, fastest, biggest, and most intense moves will make you the most healthy.

The body functions similar to any other ecosystem, and for movement to be sustainable (i.e., you’ll have movement available to you both now and in the future), every part of the ecosystem must be healthy. One small part of the body not functioning optimally can cause ripple effects of ailments throughout the rest of the system. Strengthening these small, neglected areas, and using all of your parts in conjunction with one another, is essential to overall strength and health.

Athletes tend to do more or more physically challenging things with their body, and in most cases, they’re assuming the core musculature is there to support their movement. If a diastasis recti is decreasing your ability to produce force, you could be compensating without realizing it, potentially leading to breakdowns in those areas performing in lieu of the core as well as further stressing the damaged area.

It’s Not About Avoiding Movements

Usually the number one question I get about diastasis recti is something along the lines of, “Should I plank?” or “Should I do toes to bar?” In other words, people want to know the exercises to do and those they should avoid.

The problem with this approach is that first, it varies from person to person, and second, it’s not exactly empowering, not to mention practical. Aside from the extreme nerds, not many people will consult an anatomy text to see which muscles are worked during their ab workouts in order to determine their safety. And yet still, many people just want a list of exercises that are either off-limits or okay.

This is what sets Katy’s book apart from many other resources I’ve seen on DR. As Katy noted, “I laid out a very comprehensive movement program for what I feel is a sustainably strong, well-functioning core. Or said another way, the entire book is a DO!” Instead of simply listing exercises, Diastasis Recti outlines more general, whole-body ways to prevent and/or repair DR. Katy explained:

I’ve also laid out what can place loads on the linea alba and how to pay attention to things like straining, flinging, and moving in a way that throws the linea alba under the bus a bit. So in that way, anyone reading it can figure out the “Don’ts” based on how they’re executing a move rather than the move itself. I’m not even sure there are “Don’ts” as far as exercises go, although your current strength level might mean it’s best to save a move for the future, once you’ve filled in some of your strength gaps and become aware of when you’re using pressure in lieu of muscular force production.

I frequently encounter athletic men and women who know they have diastasis recti and want to fix it, so they add daily (or less frequent) corrective exercises into an otherwise rigorous training schedule. Katy’s book emphasizes that cultivating a healthy movement “diet” is a much more sustainable approach than simply adding exercises here and there. “If you are demonstrating signs of a tissue failure and your DR is brought about and reinforced by how you are training, continuing to train in the same way and adding exercise on top of it is more like treating the symptom instead of the problem. It’s similar to how learning to eat a diet of thoughtfully selected whole foods will take you farther, nutritionally, than taking a handful of vitamins with your otherwise fast-food diet.” 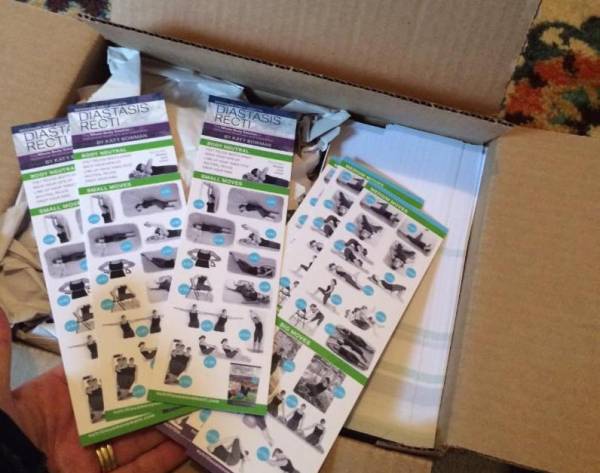 The role of movements and postural habits of the pelvis and ribcage are important factors when recovering from DR. [Photo courtesy of Katy Bowman.]

Additionally, many athletes think of DR and other issues commonly associated with pregnancy (bladder incontinence, pelvic floor dysfunction) as normal. It’s assumed that if you’ve had a kid, you’re going to pee a little during box jumps and probably need to fix a diastasis recti at some point. But as Katy noted, “The conventional use of ’normal’ means usual or typical and doesn’t imply ‘natural’ or ‘necessary.’ Calling our issues ‘normal’ grants us a certain amount of relief, but at the same time, it also can stagnate investigation into understanding the actual mechanism causing the problem.”

Katy’s book presents a global approach to healing after DR. For example, she stresses the role of the movements and postural habits of the pelvis and ribcage. This discussion struck me as especially important for people who do CrossFit or weightlifting, with repetitive movements like overhead presses and heavy squats. But don’t expect to find tables full of Do’s and Don’t’s in Katy’s book. Her approach is also highly individual and takes into account the many variables that exist from person to person. Katy explained:

I think that there’s a list of Do’s or Don’ts for everyone because the amount of intra-abdominal pressure and abdominal tension created during an exercise depends more on the person doing them than the exercise itself. Form, current strength and tensions, and weight of an exercise are all variables at play. I would say, if you’re trying to correct a DR then it will be helpful for you to learn what it is that pulls or pushes on the linea alba and choose the movement program that best suits all your goals of fitness performance and physical restoration.

It Is About the Whole Body

I’ll warn you that the exercises Katy recommends to strengthen the body after DR and restore core integrity are not what most hard-chargers would consider strength exercises. Instead, you’ll find “foundational movement tests and skills that reveal the mobility and control in particular areas that could mechanically be placing tension on the linea alba.”

Why? Because it’s not just about your abs, or pregnancy, or crunches. Diastasis recti is a whole-body issue that requires a whole-body approach. It’s refreshing to find a resource that acknowledges that need and provides concrete steps to achieve it.

Can Your Abs Split in Two? 5 Important Facts About Diastais Recti