Does Aerobic Exercise Help Get Rid of DOMS?

We’ve all felt it – that horrible soreness after a hard workout. DOMS, or delayed onset muscle soreness, is the bane of athletes. Science looks at whether aerobic activity during recovery is any help.

We’ve all been there. Too much weight, too many reps, too many days off between workouts, and we feel it the next day. Or for the next several days.

Aside from the discomfort, delayed-onset muscle soreness (DOMS) undermines athletic performance. Athletes, coaches, and trainers all have an interest in understanding what causes it and how to minimize its effects. While the cause is straightforward – muscle damage due to unaccustomed exercise, particularly large quantities of eccentric muscle actions – studies of recovery strategies have been inconclusive. Ice, massage, dietary interventions and other forms of passive recovery all seem to work to some degree, at least for some people.

Active recovery strategies, such as aerobic exercise, have not been studied as extensively, though their theoretical foundation seems plausible. Aerobic activity increases blood flow, removing the metabolic waste products responsible for DOMS and delivering more nutrients to the affected tissues. Moreover, aerobic exercise should be able to increase blood flow without causing further muscle damage. James J. Tufano and coworkers at California State University, Fullerton, sought to quantify the benefits – if any – of aerobic exercise for recovery.

The test subjects, twenty-six college-age women, were asked to perform a DOMS-inducing workout consisting of six sets of ten maximal eccentric actions of the right knee extensors, with one minute of rest allowed between sets. They were then randomly assigned to one of three recovery post-exercise recovery protocols. The control group simply sat on a stationary bicycle for 20 minutes. The other two groups pedaled for 20 minutes at either low or moderate intensity (30% or 70% of estimated maximum heart rate, respectively). The test subjects were asked to continue with their normal diet and daily activities, but to avoid other physical activity outside of the study. They were also asked to avoid stretching, ice, anti-inflammatory drugs or other recovery interventions. Researchers measured subjective pain levels (1-10 scale) as well as peak isometric and peak dynamic torque of the right quadriceps before and after the workout, then daily for the next four days. 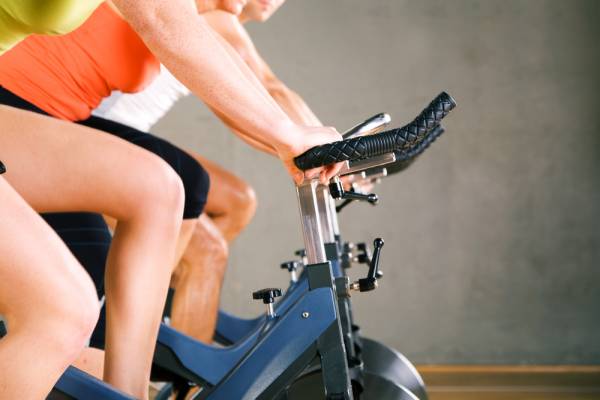 Both pain and dynamic torque were at their worst levels immediately after the workout, then declined gradually over the next several days. This portion of the test partially validated the old coaching adage that “how you feel is a lie.” Dynamic torque returned to baseline within 2-3 days, while noticeable discomfort lingered for the full 4 days of the study. Unfortunately, the result was the same across all three groups, independent of the recovery protocol. Aerobic exercise neither helped nor hindered the subjects’ return to baseline levels of discomfort or dynamic torque.

The moderate aerobic exercise group did, however, see improvements in isometric torque. Not only did isometric torque not decline as sharply in this group, it recovered to slightly above the baseline value by the third day. The researchers hypothesized that the volume of the testing procedure itself – 3 maximal isometric and 6 maximal dynamic muscle actions per day – produced a short-term training effect in the moderate recovery group.

The mixed results and the artificial nature of the test protocol make it difficult to draw practical conclusions from this study. In the real world, athletes are likely to perform more than one workout per week, and will try any and all recovery methods that appear to work. It is difficult to isolate the effect of any single intervention. However, this study does offer some evidence that moderate aerobic exercise does not impede recovery from resistance exercise, and may help to enhance short-term training effects. It does not, however, offer relief from the discomfort and performance degradation that DOMS can bring.