Ask yourself whether the cost of pushing children down the path of expected elite performance is worth it. Because all the statistics say it isn’t.

Let’s imagine you are the crew chief of a race team with a single car to race. This weekend your job is to see to it that your team does as well as possible. If everything goes well, you might even pull off a win.

But in the lead-up to the event, a few things go wrong. This is racing after all, and the high performance nature tends to magnify any weaknesses within the car and the team. Your job as crew chief is to minimize these weak points as much as possible. You get your team to pull the engine to pieces and go over it with a fine-toothed comb to smooth out the rough spots and align everything perfectly.

On the eve of the race, the car is not performing right. You now have a choice – do you pull out and save your car to race another day, or do you risk it all and race as hard as you can until the inevitable happens and the car bursts into flames?

Pay Attention to the Warning Lights

What’s horrible about this scenario is it’s the exact position I was in last week. I received a phone call from parents regarding their fourteen-year-old daughter, a half-decent 800m runner. They were concerned about a few aspects of her running and wanted someone to have a look. This is where it gets interesting.

In ten seconds I noticed three big issues that no one was trying to fix. In the last few months their daughter has had three lower body injuries – an Achilles tendinopathy, shin splints, and now a hamstring tear. Yet they wanted their daughter to run on the weekend.

“Specialization is a path to extinction. Humans are designed to move in a variety of ways.”

I asked them if they would set off on a cross country drive with three warning lights going off on the dashboard of their car. Their answer was of course not – they’d stop by a mechanic and have the car checked out. Obviously their call to me was in the hope of fixing things. But there was no way I could fix what had become an eighteen-month problem in a single trip.

For some reason, they had more concern for their car than they did for their daughter. She had multiple warning signs flashing red on the dashboard, and their response was to let her keep running.

Pain changes the way you move. The longer you keep moving with pain, the more heavily entrenched that new movement will become.

In the case of running, where a single kilometer will see between 1,200 and 1,500 steps, it’s easy to rack up bad reps quickly. The body will find a way to cope – this is one of our survival mechanisms. But sooner or later that new movement will lead to another problem. And then the new way of moving will change to another method that doesn’t cause as much pain, and the cycle will continue until you’ve exhausted all possible solutions. At that point, something catastrophic will happen. 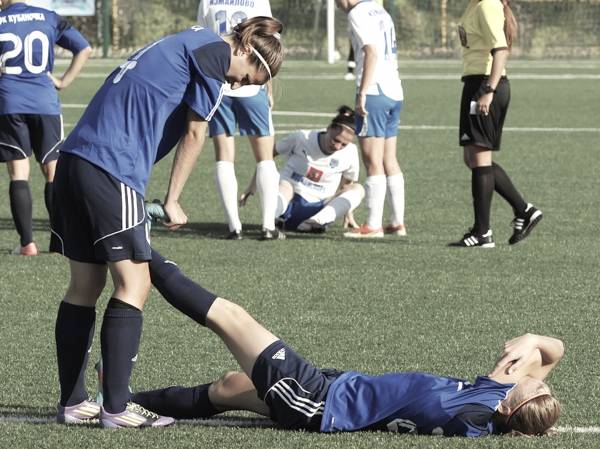 It’s like a plane flying along. If one engine goes out, that’s not such a big deal as it can limp on with the other engines. But lose one or two more, and suddenly that plane is in real trouble. Except the human body is far more complex than a jet liner. It’ll keep coming up with ways to continue for as long as it can, until suddenly it can’t. And next thing you know, you’re in front of the orthopaedic surgeon discussing your upcoming ACL repair.

Protect the Movement of Youth

This situation would be entirely different if this was an adult and the meet in question was the Olympics. To them I say go nuts. Get whatever injections you need, tape up whatever you can, and go out to win. But to a fourteen-year-old running in a school championship? That’s not worth potentially ruining someone for life.

I feel like I’m constantly saying this, but specialization is a path to extinction. Humans are designed to move in a variety of ways. Kids in particular need to move and discover their world through movement. You might say, “Look at Tiger Woods or Andre Agassi” (Tiger started at age two and Agassi’s parents strapped a table tennis paddle to his baby arm so he could hit a mobile above his cot). I think someone needs to tell you your kid isn’t either of them.

“Like an onion, the layers of injury and poor movement can take some time to peel away through diagnosis, treatment, and correction.”

Using the NFL as a benchmark, the odds of going pro are 0.09%. If your kid is a standout, they’ll be a standout without specializing. Cal Ripken played soccer in high school. It wasn’t until he turned pro at eighteen that he first played baseball year round. Colin Kaepernick played football, basketball, and baseball in high school. In fact, in the NFL 87.5% of draft picks played more than a single sport at junior level. Or there’s this piece showing that the likelihood of competing at an elite level increased for multi-sport athletes at ages eleven, thirteen, and fifteen versus those who specialized early.

Even the great Usain Bolt, who did specialize early, played cricket and soccer until he started to focus on running around age fifteen. If you think you have the next Usain Bolt on your hands, ask yourself this: is your child running a 20.6 second 200m as a fifteen-year-old with his or her shoes on the wrong feet? If yes, then by all means continue on your specialization plan. If not, you might want to think seriously about what you’re doing to your child.

Use Multiple Sports and Movements

The use of multiple sports and movements prevents adult injuries in children. This is even truer of sports such as running and rowing, where single movement patterns exist. Once injury does occur, you’ve got an even harder job at hand. Now you don’t just have to worry about performance, but even more so about retraining the way your child runs. Thanks to the way the body can cope with movement-altering pain after movement-altering pain, you may find it isn’t a simple, quick fix.

Like an onion, the layers of injury and poor movement can take some time to peel away through diagnosis, treatment, and correction. As a parent, ask yourself whether the cost of pushing your child down the path of expected elite performance is worth it. Because all the statistics say it isn’t.