Don’t Throw Away the Scales

There’s one piece of advice that often gets thrown around that is flat out wrong. That is the advice of telling people to throw the scales away when seeking to lose weight.

Usually at this time of year gyms are filled with people wanting to shed a few pounds after their holiday excesses. Nothing wrong with that, but there’s one piece of advice that often gets thrown around that is flat out wrong. That is the advice of telling people to throw the scales away when seeking to lose weight.

Imagine walking past a building site and asking the foreman what they were building or how long they had until completion and he had no idea? The reason they know where they are in the process all the time is because they have a plan. They check and reassess daily to make sure they are moving in the right direction, to measure what they’ve so far accomplished, and to assess what they need to accomplish before finishing. The advice to throw away your scales isn’t as bad as asking you to throw away your plan, but it is like asking you to work blindfolded each day.

Why People Tell You to Throw the Scale Away

The advice to throw away the scales is based on one thing: that scales don’t accurately reflect the changes going on inside the body during weight loss. That’s completely correct. During the start of the process there will be changes in body mass reflected by the scale due to water loss, fat loss, and then muscle gain while fat is concurrently being lost.

One of the things many people will tell you is to just use the mirror. If what you see makes you happy, then you’re on the right track, and if it doesn’t, then you need to adjust. But in reality, that only works for competition bodybuilders and people who have their diet pretty much down and can micro-adjust each day. In my experience, those people are usually already pretty lean and have a solid grasp of diet basics. (And like with all things, it’s the basics you should really pay attention to.)

Why the Scale is a Powerful Tool

One of the things to get in your head about diet and fat loss is that if you really want to be lean (and you don’t work out like Michael Phelps), then you need to be focused on what goes into your mouth all the time. That’s not an exaggeration. While there are some genetically gifted people who can get away with eating poorly and still look lean, the majority of us need to stay focused 24/7/365 if we plan on having our abs on display. Keeping a method of accountability on hand all the time is one of the best ways to do that.

Rammit began his journey with one simple trick to keep him going – he openly and publicly talked trash to a group of friends who bet him he couldn’t gain fifteen pounds in three months. He did some other stuff, too, like ignore every single one of his well-meaning friends who tried to tell him about lipids, insulin timing, and any other thing they thought might have helped. But the essence of his success came down to a couple of simple guidelines: 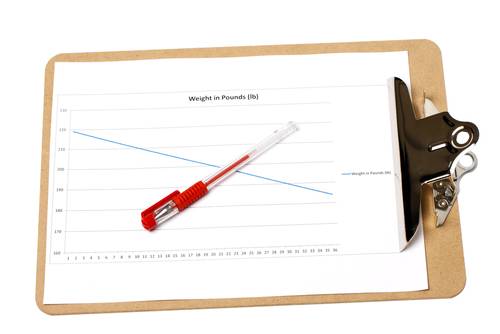 The second case, that of Phil Lebin, is an even simpler look at staying on track. He simply created a graph of his bodyweight that followed a downward trend by 0.1% daily. He added two more lines to the graph, indicating the maximum and minimum allowed weights each day. Instead of trying to stay on the expected line, he merely aimed to keep between the maximum and minimum lines. During the two years he ran this experiment on himself, he didn’t change his exercise or eating habits at all. Just checking his weight daily and being aware that he would have to weigh himself the next day were enough to keep him on track. He lost 35 pounds over a two-year period that included zero exercise.

The lesson here is clear – the key to weight change is accountability. Some people may be able to muster the self-discipline to do it themselves and will be able to follow a system like Phil’s and self-monitor. Others will need some social support to do their best. This social support can be either the support of a group of people or it can be in response to a challenge by a group of people, as was Rammit’s case. But the end result is the same – weight loss is about accountability.

So don’t throw the scales away. They are the single easiest tool you have at your disposal to track your weight changes. Measure daily at the same time (most suggest before breakfast, but after going to the bathroom) to make sure your measurements are consistent and don’t be shy about getting others involved in your journey.