“And now for something completely different…” That was the line I always remember from watching Monty Python. The whole show was so different that it took a couple of episodes to really embrace their chaotic brand of humor. Some viewers never did. I think that, in a way, their line about something different is very pertinent to everyone who has been doing the same thing for a long time. At some point we simply get too comfortable. That’s when we need something “completely different.”

Each moment can be an expansion of knowledge. [Photo courtesy of Noel Plaugher]

Let me give you an example. I was a second-degree black belt when I began studying the internal art of Xing Yi Chuan. It was somewhat similar to what I had studied before, but it had internal elements that I had to learn. I found that I really loved that particular aspect of Xing Yi. For me, embracing that unknown area was very beneficial to my health and all of my martial arts training. As I learned more about the Qigong found in Xing Yi, I became an advocate for the standing postures because they had changed my body and mind for the better. I felt so strongly that I wrote a book about it. I was glad that I decided to try something new and found that it provided elements that added nicely to what I had been doing.

Years later, I was at my friend’s martial arts school and I decided after watching him teach numerous grappling classes that I needed to learn some grappling. Students in my school had asked about it, plus I thought it was a good idea since all of my experience was primarily with striking arts. This began my pursuit of Judo.

I still remember the first time I did Randori (free practice) with my classmate. The instruction part of the class was over and we had been working on techniques for both standing and ground work. We were then instructed to do Randori for one minute and then switch partners. A minute didn’t seem very long to me. I thought to myself “Well, I have been doing these other arts for a long time so…whoa!” He had gripped onto my collar and pulled me suddenly in one direction, and then threw me in another. I landed with a hard thud. He quickly followed me to the ground, landing on me with his body. (I could swear I felt my ribs flex a little, ugh.) He was on top of me quickly working towards a submission, and I tried desperately to think about what to do, “Crap! How the hell do I… Ok, I think I am supposed to move to the…” I suddenly felt burning pain in my elbow as it was being hyperextended and I tapped furiously against his leg. He had pinned me with an arm bar. We quickly stood up, although I got up a little slower than he did, and we began to do it all again. It felt much longer, but it had only been a few seconds into that minute. This was going to be a long minute. We went on until the time was up, and I realized that I had a lot to learn.

That experience was quite a wake-up call for me, and I immediately understood why some people choose to learn something different, and why some stick to what they do best already. 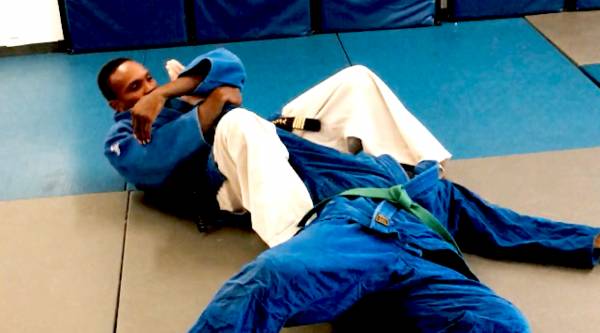 All of my training has helped everything else I do. [Photo courtesy of Noel Plaugher]

Get Out of the Familiar

Sticking to what you are an expert in, and are comfortable with, gives you a certain safety with the familiar. It is uncomfortable to place yourself in an unfamiliar environment, but that is when you really learn, and when you are really tested. If you like to feel secure, then it is very uncomfortable to throw yourself into the metaphorical deep end of the pool, but it is probably very necessary for your own personal growth.

As a martial artist, I think exposure to new things is necessary, whether you embrace them or not – If for no other reason, one must keep their ego in check. It is too easy to be an “expert” with theories and logical reasons why you have all of the answers, but that is not reality. There are unknowns and a randomness of how events unfold that makes the comfort of certainty the main reason that it should be shunned. Certaity is not real.

When I extracted myself from that environment of certainty, it left me with the reality of who I really am. When there is nothing familiar around you, you stand metaphorically naked, stripped bare. It can be unpleasant if you see things you don’t like. There are things that were likely always there, but now are unable to remain hidden, and so they must be changed or accepted. But, to be the best you can be, it is important to see who you really are.

Since studying martial arts, and trying many new things, I have been able to add these new elements to my repertoire. Ironically, rather than finding an amalgamation of differences, I have found a plethora of similarities. Even between seemingly unrelated things like Judo and Qigong there are still similarities. I found that the better my standing Qigong training, the more comfortable I was with my Judo because the use of energy and whole-body power is a part of both. My comfort with close proximity from Judo has enhanced my previous training and provided some interesting insight into the use of motion that I learned previously in other arts. All of my training has helped everything else I do.

I have always enjoyed learning, and I feel stagnant when I am not challenged or learning new things. For me, the most empowered feeling is not putting on my black belt, but putting on a white belt. With a new and untraveled road of knowledge in front of me, I know that I will be learning all new things and having new adventures. Each moment will be an expansion of my knowledge in an endless collection toward my own self-mastery. I urge you; do something different and challenge yourself this week.

More on challenging yourself:

Why Better Than Average Isn’t Good Enough for Me