It is interesting to contemplate the fear that has encompassed society, and much of the training community, around the concept of lifting with a flexed spine. “Bend your knees and not your back.” Manual handling guidelines are posted in workplaces without a real understanding, or warning, of the underlying causes that precede low back injury. Yet despite the fear surrounding and the subsequent avoidance of, flexed spine lifting, back injury statistics appear unchanged.

Flexed lumbar spine strengthening is mandatory for an athlete to return to full ability. If you don’t teach athletes (and people in general) to bend and move, then they are certain to get injured again. Fear spinal flexion if you don’t understand it, but don’t berate it out of fear. This is a fear born of ignorance, ignorance by the medical community (which rarely understands resistance and weight training), and ignorance by educators in the health and fitness community.

I understand how this has occurred, and why we are in the situation we are as a society, and as a fitness community. It comes down to people passing themselves off as experts in areas of which they have little real understanding. They get away with it because there are few people who are qualified in this area and not many of them write or teach. So to fill this natural void you get so-called ‘fitness leaders” such as Paul Chek writing about a topic he has such little understanding of that he is just flat out wrong.

For example in his Paul Chek’s Points for More Effective Training, he wrote about the lumbar spine lordosis, “If this curvature is not maintained during lifting activities, both disk and ligament run the risk of injury. There is however a tradeoff of risks; when the low back curvature is held throughout a lift, there is an elevated risk of muscle injury, since ligament support is greatly reduced in this position.” Besides the fact he is clearly so undereducated in spinal anatomy that he cannot even spell “disc” correctly, Chek seems to think you want to rely on ligament “support” as a way to prevent muscle injury. Really?

Further he said, “With this clinical information in mind, it becomes evident that maintaining your natural spinal curvature throughout a lift is essential.” I love it when people use the word “clinical.” It makes them sound so scientific, doesn’t it? This sort of advice is okay if it comes from a trainer who knows little about lower backs and admits it, but to come from a person who holds himself up as having an understanding and authority on the subject (and then gets people to pay for it), it is abominable.

Now Paul Chek was simply the first example that came to mind to show how society and its industry are largely ignorant of total lumbar spine rehabilitation. I am here to loudly state that if you do not teach a person how to load their spine in flexed postures, then you are sure to find them getting injured when it occurs in functional life situations – and it will. Then again, if you don’t know when to flex a spine, it is a good idea to start learning about when it is safe and appropriate to do so. 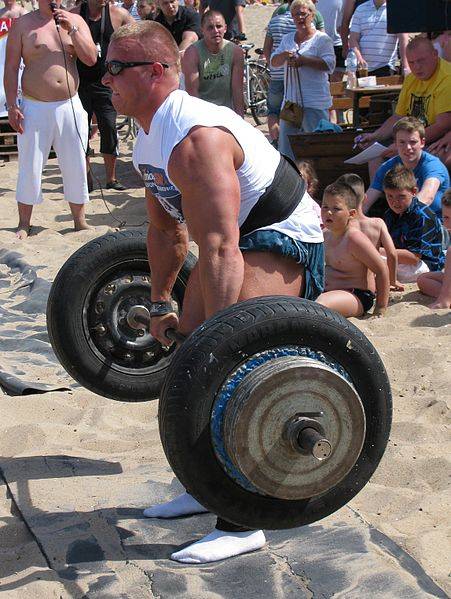 This is my point. I don’t begin rehabilitation with spinal flexion, but it must be included before rehabilitation is complete. Nearly all the educators in our field are fixated upon neutral spine lifting and moving. This is unnatural. It is only one component of function. Watch any professional sport, you will see flexed, loaded lumbar spines. Watch speed skaters, wrestlers, world record deadlifts – spinal flexion is used and it is loaded. Why do people not understand this?

Look at the anatomical facts. Did you know that in the general population of eighteen to 35-year-olds the lumbar spine has approximately eighty degrees of motion between flexion and extension? That is correct. Your lumbar spine can normally move this much in function. The number is general, and there are many studies, so if you want to read more about that range then pick up Professor Stuart McGill’s book Low Back Disorders and read chapter five.

So considering this as your functional range, why do the “authorities” seem hysterical about keeping the lumbar spine in one position only at all times? Because they are scared and do not know how and when it is appropriate to teach people to flex. I met a patient once who had not bent forward for twenty years because she was told that was how she would injure her back. I don’t think she is alone.

But guess what? This lumbar movement paralysis is a relatively new phenomenon, enjoy the photos below. 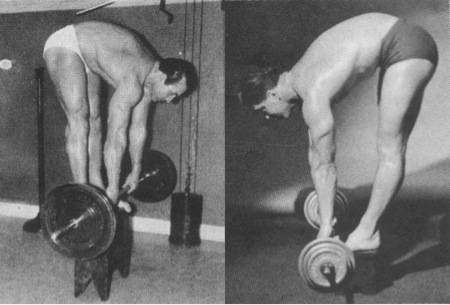 I bet there are people cringing at those photos. Why? What are you scared of? This is how normal spines can move. It is perfectly fine and good for you – if you know when and why. (Okay, George Shandor needs a bit more lumbar movement, but it is for illustration purposes only.)

How will you know when to begin working on exercises that involve natural lumbar spine flattening or flexing? Well, I can’t start that now at the end of this article, as it is a whole article or three in itself, but I’ll begin that discussion soon.

Let’s just finish with a few insights from the immortal John Grimek. In discussing the deadlift in all its variations he said:

When this exercise is worked regularly it serves to develop those two cable-like muscles, the erector spinea, that run along each side of the spine (from the head down to the hips) better than any other exercise except, and I repeat, the quick lifting movements. All these movements and exercises, such as the deadlift, serve to develop and strengthen the entire back. This is important since this is the region where weakness is first felt by most persons. Yet this region can be kept strong and flexible throughout life with proper training. 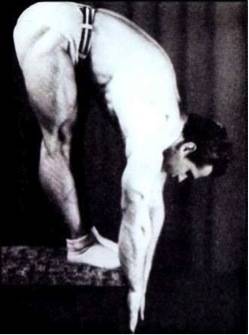 You know Mr. John Grimek (pictured to the right) had the runs on the board not only was he was unbeaten in bodybuilding competition during his competitive years of 1939-1949 winning every top title, but he also could perform one-arm chins, one arm swing 200lbs, and do the splits. He was also the U.S. national weightlifting champion and represented the United States at the 1936 Berlin Olympics. Oh, yes, and Mr. Grimek was squatting over 400lbs when in his late sixties. Do you think he could have done all this by following Chek’s advice of “maintaining your natural spinal curvature throughout a lift is essential”?

So in the 21st Century it appears that spinal education and general strength instruction need a bit of looking backward before moving any further forward. In the future, I’ll show you how to combine modern research with old-school hard work to create that strong and flexible lower back that moves through a full range of flexion and extension. Stay strong and flexible!

Note: On the spelling of disc. Medical terminology derives from Latin, hence “disc” is the correct spelling. The word “disk” is from the Greek root, hence medically incorrect.