We all know that the gym has its own rules regarding what is seen as good and bad behavior. Some of it should be common sense – if you sweat like a bear on amphetamines do everyone a favor and wipe your gross sweat off the bench after you use it. Others, like not curling in the squat rack or even standing right in front of the mirror curling and blocking off the dumbbells to others, are maybe less obvious but equal signs that you need to have a little more consideration of others in what is shared space.

But there are a few other pieces of training etiquette I’ve noticed on my current Ironman training adventure. Just like all activities there are a few unspoken rules about what is considered appropriate for cyclists and swimmers. If you’re just getting into these activities, perhaps you’re not aware of some of these, but it would pay to listen up because not following the rules of a new group is a quick way to not being accepted by your new peers.

I’m going to start off and assume that as we’re talking about cycling you’re not on a BMX wearing board shorts. So just imagine that you’ve got a real bike, clip-in pedals, and some Lycra. But just because you look like an extra in the Tour de France doesn’t mean you’ll instantly be accepted amongst the cycling fanatics. Be warned – cyclists may look a lot like little sissies in their shiny Lycra, but behind that façade every cyclist is tough as nails. Tick them off at your risk.

Never half wheel. When you go for a ride with someone or a group of people you tend to ride two abreast. Don’t be the guy who gets a little competitive and starts edging his bike a little bit in front. That’s called half wheeling. In a group it can be a quick way to bring down a bunch of riders. If you’re out for a ride with a group you go at the group’s pace, not some imagined Giro stage that you have going on in your head. Leave half wheeling to race situations during actual races. There’s no place for it in casual rides.

Follow the road rules. You make everyone else riding look bad when you ignore stop signs and red lights. And with the ease of pedals these days there is never an excuse to stay clipped in and balance yourself by resting your hand on the roof of a car. That leads to road rage and metal beats Lycra any day of the week. If you’re riding as a big group be mindful of other road users. You don’t own the road, and if you take up the whole road you’re going to see people get hurt out of your arrogance. Many drivers already hate cyclists. Don’t make it worse.

While I’m on the topic of making everyone look bad – always wear a helmet. They’re not heavy, you won’t overheat, and it may just save your life after you’ve ticked off the wrong driver and they decide to see how close they can get to you and misjudge it. The pros all wear them and so should you. 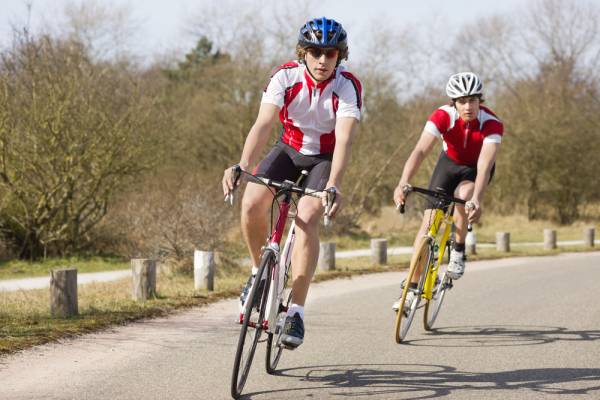 Stay out of groups beyond your ability. Drafting while riding can be an excellent way to save energy in a race situation. Being hidden from the wind by a few extra riders is like riding downhill with the wind at your back. But you may not have the bike handling skills to cope with the problems that are caused by the extra speed or even the dynamics of the group. Here’s a tip: if you’re gasping for breath trying to hold someone’s wheel and they’re talking, you don’t belong in that group. Drop off the back before you cause a crash.

Don’t draft off people you don’t know. This is kind of like the last point but is really starting to become my least favorite thing every weekend. If you happen to come across a very small group of two to four riders there’s a good chance they’re all good friends, or maybe work colleagues (because the peloton is now better than the golf course for business talks). Do not try to latch on. They may be talking about personal issues, as friends are wont to do, or even discussing some private work issues. Eavesdropping is still eavesdropping, no matter the location. Do the right thing and back off and do your own ride. The same goes for if you come across a solo rider clearly on a hard training ride. Leave them be, especially if they are on aero bars, as they can’t get to their brakes quickly if anything unexpected happens. They may already be right at the end of their ability and their own bike handling may not be sharp. Riding right on their wheel is a recipe for disaster. (And if you do this to me I will either spit on you, blow my nose on you, or outright tell you where to go). Again, stick your own nose out in the wind and do your own ride. No one likes a loafer you jerk. 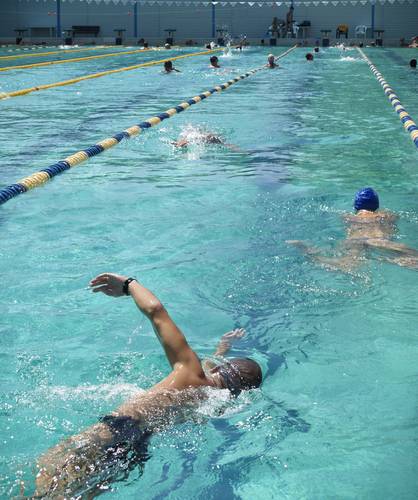 Typically the pool is divided into lanes that are marked with “fast,” “medium,” and “slow.” Believe it or not this is important. Just as driving way above or below the speed limit can cause problems, it is important to be in the right lane at the pool. “Fast” doesn’t mean are you trying to swim fast. It is for actual fast swimmers. Here’s s tip: if you’re wearing board shorts and can barely swim a lap without dying, you’re not fast. Likewise, if you’re a fish don’t act like a jerk and go swim with the slow lane guys just so you can feel good about yourself for passing some people. If you are determined to try to swim above your ability, don’t be surprised when people either grab your foot and pull you under as they swim past or just swim straight over the top of you. Really fast swimmers who grew up in ultra-competitive squads are like sharks and will attack the weaker fish – don’t be the weak fish.

Speedos. Call them what you want – budgie smugglers, crotch rockets, or any other name – if you swim seriously you’ll soon see why these are the garment of choice. That also means you’re basically in your underwear in public. So make sure it’s nice underwear. If your pair of Speedos is the same loose, threadbare pair you’ve had for years, then go buy new ones. No one needs to see your ass hanging out as you waddle around the pool deck. And never buy white. Ever.

The change room. Gym horror stories about the change rooms abound, which is why I don’t actually use them. Thankfully I live just around the corner from the pool and go home to shower and change. Remember again that you’re in a public place. Just because you shave naked at home doesn’t mean you should be wandering around au naturale in the change room with shaving cream on looking for your razor. And no matter what, no trying to dry your nooks and crevices with the hand dryer!

Every little community has rules and their own idea of good etiquette. Ignoring it will only see you ignored by these groups, which will make finding training partners difficult. Remember that most of the places used for endurance sports are public domain and act accordingly. And don’t be fooled by how skinny endurance athletes are. They’re every bit as territorial as any muscled-up weightlifter and will be quite angry if you negatively impact their training or cause a crash.