I see a lot of programs online with tough-guy inspired themes. These plans promise to turn you into a lion, with names like tactical this or operator that. But as I said at the recent Strength Matters Summit in the UK – everybody wants to be a lion until it’s time to do lion shit.

As an example, there is a stock test in the Royal Marines of thirty miles with a pack, webbing, and rifle, obviously done in boots and pants, to be completed in eight hours. If you’re going to go for eight hours, you need to do some training that lasts that long with a similar load.

Right there is the problem: no one really wants to do the lion shit. They fluff about with shorter workouts that focus on HIT and the anaerobic system. But when it comes to doing lion shit, you’re going to need to go long. This isn’t the exclusive domain of the military, either. An MMA fight lasts for three, five-minute rounds. While each round is only five minutes, the total fight length is fifteen minutes.

To understand why longer training is necessary, you’re going to need a quick lesson in energy systems.

I like to think of the three ways we create energy as traffic lights – green, yellow, and red.

The green stands for the aerobic system, which is primarily responsible for everything you do that takes longer than two minutes. You want the green light all the time because it powers everything. It represents the base layer of how you produce energy. Its drawback is that it can only get you so far. When you really want to turn on the after burners, you need more energy than it can create.

That’s where the anaerobic systems come in. We have two of these – the alactic and glycolytic. In our analogy, the glycolytic system is the yellow light. When we start to get to this point, alarm bells start to go off. Sooner or later you’re going to need to slow down once you enter yellow territory. The glycolytic system will take you from ten seconds out to about fifty before you can’t sustain the workload any longer and are forced to slow down.

The alactic system (also called the ATP/CP system) is the red light. It produces enormous amounts of power, but only for short durations. As an example of how little time can be spent in this red zone, think of Usain Bolt – perhaps the greatest alactic athlete on the planet. His race lasts ten seconds. By the time he reaches the 70m mark at only seven seconds, he is already slowing down. If the best athlete on the planet can last around seven seconds, that means the rest of us have only five or six seconds at best in our red zone.

Take a look at this chart for a clear visual representation of how a bigger aerobic system gives you more potential energy expenditure. 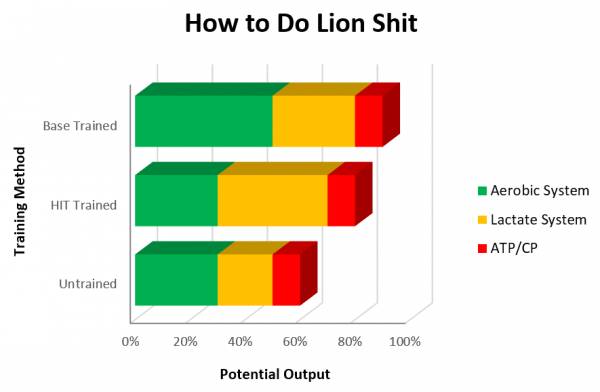 This is why you must consider the length of activity when you structure your training. It always strikes me as funny that people think of fighters as power athletes and runners as endurance athletes, since their events take the same length of time. At fifteen minutes, an MMA match is just as long as a 5000m race. Yes, a fighter needs to work in and out of their yellow and red zones looking for takedowns and throwing punches and kicks, but so does a runner who surges to break from the pack and then kicks for home. The differences are only in muscular action, not energy output.

“You want the green light all the time because it powers everything. It represents the base layer of how you produce energy.”

In a tournament situation such as BJJ competitions, where you have multiple matches to win through to the finals, a powerful aerobic system could be the difference between arriving at the final relatively fresh or well below your best. It’s also what allows you to recover between rounds in an MMA fight. Although the rest periods aren’t long enough to ever fully recover, a powerful aerobic system will allow you better recovery than a HIT trained system.

The Advantages of Couple’s Workouts: If you want to be a lion, you need a powerful aerobic system.

Developing the aerobic system allows you to work harder before going into your yellow or red zones. Let’s pick some arbitrary numbers to use as an example. If we use Maffetone’s heart rate guidelines to give a rough idea of someone’s aerobic ability we get a number that is 180 minus your age. That gives me a rough score of 136bpm before I start to head into my yellow zone and risk burnout.

However, what most people fail to remember with Maffetone’s work is that there are qualifiers for consistent training over time. In fact, Maffetone believes you earn an extra 5bpm if you’ve been training consistently using aerobic means for two years or more. So my MAF number is now 141bpm before I start to struggle – a 3.6% increase. That allows Andrew 2.0 to work harder than Andrew 1.0. A 3.6% increase in ability over a 5km run equates to about 40 seconds faster.

If you really want to do some legit lion shit, like SEALFit’s Kokoro camp, where you’ll be expected to run and run and run some more while being harassed with hundreds of burpees and push ups, you’re definitely going to need a strong aerobic system. When I did it in August we did Murph on the first night, then ran 18 miles up and down a mountain. Then we did 350 burpees. Yes, you read that correctly. Then we ran two miles to a pool where we did about an hour and a half of non-stop swimming races. When we got out we did 450 push ups, and yes, you read that right too. And then we ran back to the camp. The picture is of me at Kokoro. 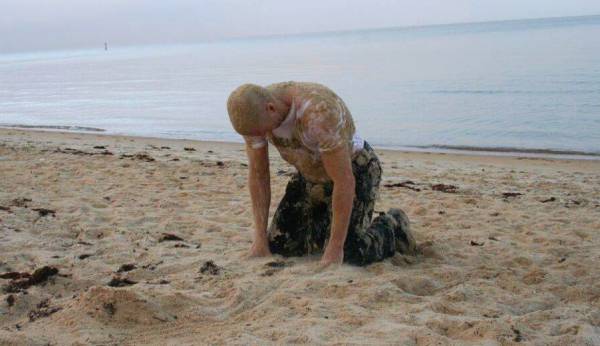 “The aerobic system allows you to flush all the toxins from hundreds of burpees or push ups so you can do it all again in a little bit.”

If you don’t have a robust aerobic system capable of delivering energy indefinitely, how do you think you’ll cope with that? And it’s not even about all the running. The aerobic system allows you to flush all the toxins from hundreds of burpees or push ups so you can do it all again in a little bit. I watched half our class drop out simply because most of them didn’t have a deep enough gas tank to cope.

Now that you understand why the aerobic system is so important for anything that lasts longer than two minutes, here’s one final trick – you need 90+ minute sessions. There is a specific reason for this, and it’s a cool little thing called AMPK. AMPK, otherwise known as 5′ adenosine monophosphate-activated protein kinase, makes you better at using glycogen and fatty acids for fuel. The problem is, this ability is only developed in the absence of glycogen. Endurance athletes know this as “bonking” and avoid it at all costs in race situations. However, there is a big benefit to deliberately bonking in training, or at least undergoing longer sessions designed to run your glycogen reserves dry.

How long do your sessions need to be? Well, we store roughly 1,500 calories of glycogen. At an aerobic heart rate riding a bike, I burn 30 calories per kilometer. That means I need to ride about 50km before I even access this adaptation, which will take about an hour and a half.

But that is just the beginning of the process. To actually develop it, I need to work well into the empty gas tank scenario. That’s why sessions of two hours or more are extremely useful. You can start to develop this during any longer session, not just aerobic ones. At Read Performance Training we have a standard two-hour Saturday morning session designed for just this reason. Those who attend have developed amazing fitness.

When it comes to developing real world fitness, there’s a hierarchy of training. Running, riding, rowing, cross country skiing, and the VersaClimber are all at the top of the list. Everything else is simply not as effective.

You may love to train in a variety of ways, but there’s no sense in using methods that can’t develop your fitness as highly as others. Build your aerobic system up so that you, too, can do some lion shit.

Liked this article? You will love Andrew’s book, Run Strong.