The year 2011 was a great one for the promotion of heavy, daily training. Olympic weightlifting continued its rise in popularity, CrossFit partnered with Reebok, and the so-called “Bulgarian” methods of training have crawled their way out of the darkened clubs of the hardcore and reached into the light. “Everyday Athletes” are starting to realize training heavy, day after day, is a great way to make fast and steady progress.

I’ve written extensively on the Bulgarian Method in the past. However, there have always been a few big questions lingering in the minds of “regular” folks like us about how many of these ideas can honestly be applied to our fitness programs given our busy and complicated lives.

The first issue is a simple confusion about the name “Bulgarian” – what do I mean by that? I’m not going to get into the answer to that question here. Suffice it to say that equating daily training with the name “Bulgarian” is misleading. So, we’re going to completely ignore the word “Bulgarian” today and hone in on the concept of lifting as heavy as you can every single day you walk into the gym, and just leave it at that.

The second big problem is whether you can actually lift to a max every day and not die. Yes. Yes you can.

For the sake of simplicity, I’m going to narrow our focus even more and talk exclusively about daily front squatting.

What Does “Daily” Mean?

A few of my lifters and I have gone through periods where we literally squatted every day – even Sunday – often multiple times a day. The highest frequency I’ve personally done was fourteen sessions per week. I was doing thrice-a-day on Monday and Wednesday; twice-a-day on Tuesday, Thursday, and Friday; and once-a-day on Saturdays and Sundays. My progress was unreal.

Don’t worry! I’m not going to ask you to lift fourteen times a week.

When I talk about daily training I’m going to follow the lead of many others, like my buddy Bret Contreras, and stick with five days a week of lifting. Yeah, yeah, that’s not technically daily. But, it is close enough for our purposes.

Most adult athletes (even most high school athletes) can’t afford the time to train more than five times a week. They can recover from it just fine (overtraining is not a complete fabrication, but it is close to one). However, the time constraints are rather high for most of us, so eeking out fives sessions per week is going to already be pushing it. Therefore, when I refer to “daily training” I’m talking about five day a week.

The most important reason I like lifters to train with me everyday is because it will make lifting more intuitive, faster. Great lifters share an ability to lift in a near mindless state. What they are doing they’ve done so many times they can approach perfection (in terms of technique) on every lift, every time, without thinking.

The only way to get to this point yourself is via practice. Practice takes time. If you take time everyday, then your rate of progress every month will be greater than if you trained half the amount of times.

As I like to say: More is not always better, but it usually is. 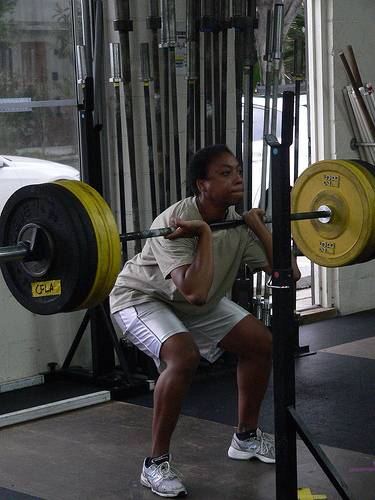 The next reason for daily squatting is injury prevention. I know it seems incongruous to claim training on a heavy lift like squats every day will result in less injury, but I believe that is true. I don’t have any solid scientific studies to back this up, but the combined experience and observation of coaches like myself, John Broz, Glenn Pendlay, and many others who are vocal advocates of this kind of thing adds up to some level of correlative evidence.

The connective tissues are highly prone to tightening up after heavy sessions of lifting weights. In the few days following a bout, this tightening can increase significantly. If you lift everyday, however, you don’t give your body this opportunity. Just when you are about to tighten up, you start your warm up for another heavy squat session which loosens you right back up.

We joke in our gym the only cure for soreness caused by squatting – is more squatting!

The last reason is the one I’m sure you care about most: You’ll get stronger faster and with less mental anguish.

Once you are past that early beginner stage, and your easy linear progress has dried up, it’s time to get serious. There are so many ways to get strong, but the routines are often so complicated to implement that staying on track becomes harder than actually doing the workouts themselves. Lifters in this situation rarely follow the programs correctly and end up making gains far below what they could have. This is one of the many reasons lifters who have a good coach make faster progress than those who don’t. Your coach can focus on the details while you just do what you’re told.

Doing roughly the same thing everyday, no matter what, takes the mystery out of it and lets you focus on the two most important keys to success: hard work and consistency.

Okay, Fine! You Sold Me – How Do I Squat Everyday?

I don’t like “medium” anything. The idea you should take everything in life in moderation is something that *sounds* good on paper, but is quite hard to make work in your real life. 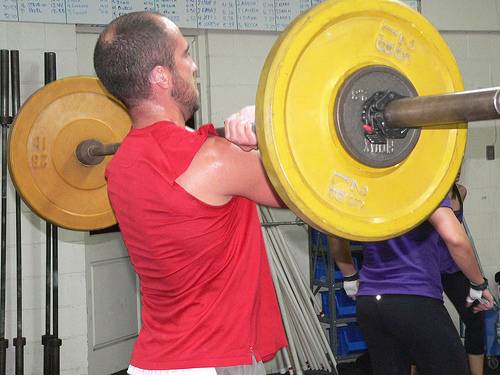 Instead, I like the idea of alternating between extremes so you average out with some level of moderation in your life. You work hard, then you play hard, divide that total by two, and you get a life of moderation.

Staying with this idea, most of my workout programs revolve around you alternating heavy and light days. That’s a hair misleading as I never (rarely!) want you to intentionally lift less weight than you are capable of on a given day. But, I do have you raise and lower the amount of volume (sets x reps) you do to increase or decrease the total amount of work you are doing on a given day.

Here’s an example program of daily training on front squats I have used with countless numbers of athletes at my gym to increase their squats significantly in a short time. Don’t let the simplicity fool you, that is the whole point.

Those three sets of two reps at the end of your heavy day are called “backoff sets” and they play a huge role in the more advanced programs of the Bulgarian system. How to use them and what they should consist of is a rather complicated topic, but the underlying point is simple: work your tail off.

I suggest you start lower than you think you need to. Starting your backoff sets at 70% is not shameful. You just won’t count those toward your final three work sets.

You will be tempted to quit once you hit three sets. That is a huge mistake and shows you are not understanding the point. Percentages are just guides. To say that you need three sets of two reps at 80 to 90% of your best single for the day is not a declaration of fact. It is an educated guess. I’ve coached enough lifters just like you to know that those percentages tend to be about the maximum most lifters can honestly do (at least at first). But, that is not always the case, and it will change every time you do it.

The greatest thing about daily training is you get better about making honest evaluations of your current state of ability. I want you to end up doing at least one very hard set of two reps. Very hard! While you should not be failing on these backoff sets (grinding the reps out really slow counts as failing), I still want you to be at the upper limits of your capacity for the day.

Finally, don’t overcomplicate the simple. Start squatting everyday, stay mellow, and add some kilos to the bar. You’ll get stronger, you’ll cut down on injury, and the lift will become more intuitive for you. Talk about the best of all worlds!