If someone asked you to bend a nail, you’d probably brace the object against some part of your body, typically your leg. The brace acts as a fulcrum from which you apply the pressure on each side of the object. This is called braced bending, and it is what this article will teach you how to do.

Braced bending is different from short bending, which I showed you in my previous article on nail bending. Short bending is done away from the body, and all the power is generated through the hands. But even though you use a fulcrum, braced bending is not easy. You still need hand and wrist strength, even though other parts of the body come into play. This will be described more as we get into the details of technique.

Braced bending is typically performed with objects in the 8” to 12” range. When you go longer than that, you’ll still be bracing the object against something, but you may create multiple bends. This is called scrolling steel, and is considered a different feat of strength altogether.

The most common brace is the thigh. Note that this hurts. You’re applying a lot of pressure on the object, which then digs into your leg. You can place a pad or a rolled up hand towel on your thigh to help, but it will still be painful. Jeans seem to disperse some of the pain a bit more than other clothing. Get used to it. Part of being a strongman is developing a high pain tolerance. 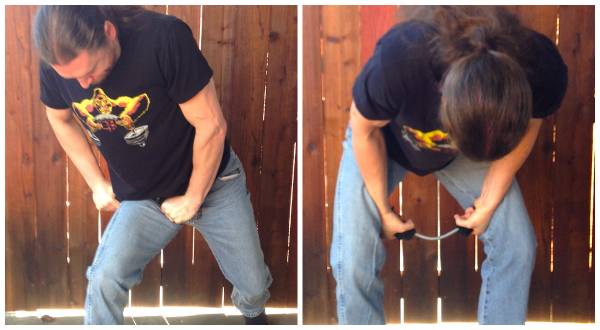 Progress to Wrenches and Screwdrivers

Start to learn this feat with a 12” spike. Once you’re good there, you can move on to 10” spikes. This is a pretty big jump in difficulty. Like other feats of strength, the difficulty will change depending on the quality of the steel used. In my experience, galvanized nails – those with a zinc coating – are easier than non-galvanized.

Once you’ve mastered the 10” spike, you can move on to other objects that can be bent in the same way. Thick screwdrivers, hammers, and even wrenches. Bending these common household objects with your hands is a stunning feat to the average person. Turning a brand-name wrench into an “S” shape with just two bends is one of the feats that put grandmaster strongman Dennis Rogers on the map.

Braced bending takes strong hands and a strong body, as well as a large degree of pain tolerance. But if you master it, you’ll be able to perform a feat of strength few can match.