When it comes to stories, Dan John is in no short supply. Read on to hear how he began his journey in fitness, his 2 pieces of advice for coaches, and what he thinks of the current fitness industry.

For whatever reason, people who are really good at getting other people strong, fast, and fit tend to be a unique breed. By this I don’t mean your run of the mill globo-gym trainers, I mean the truly talented and elite strength and conditioning coaches of the world. They are a bit like mad scientists, with senses of humor, who could throw really heavy things at you.

Dan John is amongst this crowd, at the top of this crowd in fact, and he is indeed unique.

Dan John’s journey into the world of fitness began in 1965. He and his brothers went on an outing to Sears with a small sum of money they inherited from their aunt’s passing. With it they purchased a Ted Williams Barbell Set and the wheels were set in motion. Said Dan, “We brought it home and I looked at that and I thought, ‘One day I’ll lift those fifteens.’”

Between 1965 and today Dan has done everything from coach high school athletics to win the Pleasanton Highland Games. These days he coaches the elite of the elite as his day job and coaches the middle-aged and seniors for free.

While there are any given number of topics to discuss with Dan (and believe me, he’s got a story or three for all of them) the subjects of what it is to be a good coach and the state of the current fitness industry came up repeatedly in our discussion.

We get stuck in these stupid, deadly clichés of who we are supposed to be as fitness trainers. We fall into drill sergeant mode; we think we’re in some bad army movie from two decades ago. Or you get this hot female personal trainer who was a gymnast and she became a college cheerleader and one time she woke up and she weighed 118 pounds and was just disgusted about the way she looked in her bikini in Malibu. So, what happens in our industry is we get these clichés who are our front line.

For coaches wanting to become better at what they do, Dan gave two pieces of advice:

“First, in the same way an athlete keeps a diary and a good dieter keeps a food journal, it’s a good idea to keep a coach’s journal, “ said Dan. He recommended a coach log everything from how many students successfully learned a movement each time it was taught, to building checklists of things that need to be done leading up to events, promotions, holidays, and anything else that might occur in their gym. “You have to recognize you’re going to make a lot of mistakes,” said Dan. “The key is to not make them over and over.”

And when it comes to coaching, Dan advises to keep it simple. Keep your coaching simple and keep your workouts simple:

You know, I hear you young coaches. So, you’ve got someone doing their first squat and you say, “Oh, they’ve got multiple thoracic extension issues about the bipolar region of their femur.” What the hell? Let them squat a few hundred times; they’ll get back to it. Just stop with the absolute constant hands on correction.

Dan’s recommendation is to keep diet and exercise simple. Compliance is the number one factor, not necessarily the particular diet or the particular exercises, according to Dan. Slowly ratchet up intensity and keep it simple. 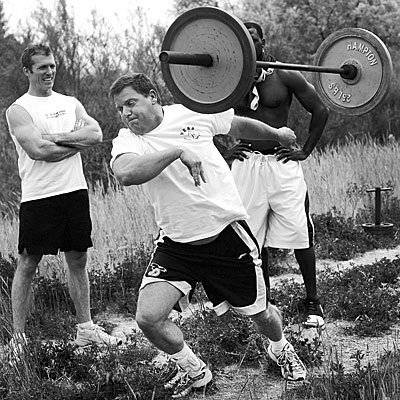 But what about the rest of the fitness industry? Is it doomed to keep fragmenting and becoming increasingly watered-down, or is there a hope for a return to old-school gyms where the elements of gymnastics, lifting, and basic human movement were prized above theatrics?

We’re still stuck by who dominates our industry. On one side it’s like the Gillian Michael girl. She’s smoking hot. She’s in those Go Daddy commercials. She’s in the short-shorts and she’s always showing her stomach off. And on the other side is this new thing that’s showed up: if I was a Navy Seal and sold fake vomit that said, “I’m a Navy Seal. You gotta buy fake vomit” – there are people who would buy it.

I don’t know how we let it get untracked. I know this – I know that tumbling is the best cardio you can do. I know that kettlebell swings are better than treadmilling. I know that. I know everything I just said is never going to make a difference. A kettlebell you can buy for seventy to a hundred bucks. A treadmill is six thousand. I can market as well as these guys on TV. I guess I could, but I don’t want to be made fun of.

Dan John’s Predictions for the Future:

To learn more about Dan read the rest of our feature interview:

You can learn more about Dan John’s strength training philosophy in his new book, co-written with Pavel Tstsouline – Easy Strength.

Read Dan’s article, an excerpt from his book – Increasing the Deadlift for the Collision Sport Athlete.