Jon has attended more RKCs than anyone on the planet. What has he learned? It’s about balance – strength and flexibility cannot be separated.

“If you like this, you’ll have to check out this new thing that we’re bringing in called kettlebells.” These were the words Pavel Tsatsouline spoke to Jon Engum that would change the course of Jon’s athletic and coaching career. Pavel uttered these words at a mobility clinic in the Twin Cities area of Minnesota well before the RKC even existed.

On his way to these accomplishments Jon was a martial arts machine, training and competing non-stop. He explained to me what it was like, during his early twenties:

I was competing very heavily at the time. I was hungry to make a name for myself. We didn’t really have any scientific basis going on back then. In fact, we didn’t even really consider ourselves athletes. We were fighters. Our training week went little like this: Day one, we would work out really hard. The next day, we worked out damn hard. The next day, we worked out f’ing hard, and then you’d go to a competition and fight and get the injuries that go a long with that. Then Sunday you’re fueling yourself back up, trying to figure out how to get to the gym again.

The years of training hard took a toll on Jon’s body. After some time he realized he was never allowing his body to completely heal and he was becoming more tired and more inflexible as the years went on. This realization prompted Jon to seek out advice on stretching and mobility. He attended every seminar he heard mention of, followed every protocol he was exposed to, and discovered, as he explained, “the world is full of charlatans.” No matter what he tried, he wasn’t getting any more flexible and his body wasn’t feeling any better.

Then, he noticed a brochure for a seminar with a young Russian man name Pavel Tsatsouline.

It was like an open type thing, a very cheap seminar, but the claims were out of this world. You know, “Do this, and this, and this and you will get these massive gains in flexibility.” So I went, and this was before kettlebells were over here, before there was even a Russian Kettlebell Challenge. This was back in the day, when Pavel still had hair. When we both still had hair! 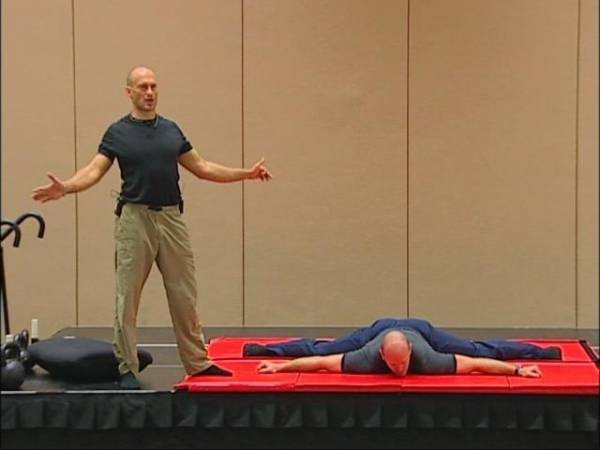 Even as a young boy, I couldn’t do the splits. I never was able to accomplish the splits, and that was kind of a benchmark of flexibility as far as the martial arts world was concerned. I went to this course, and Pavel said, “Jon, you have to do this, and this, and this, and do it right now, and you will be able to achieve the splits.” It worked. It was instant, like an unlocking. It wasn’t “Go do this for six months and you’ll gain a little bit.” It was right now. The results and the effects were dramatic. So he said, “If you like this, you’ll have to check out the new things that we’re bringing in called kettlebells,” and the rest is history.

Lucky for Jon the original RKC seminars were all held in the St. Paul, Minnesota area. Hungry for knowledge, he made a regular practice of volunteering at all of Pavel’s certifications. According to Pavel, Jon has attended more RKCs than anyone else on the planet.

With the knowledge he gained from working with Pavel, from working with his own students, and from his personal martial arts journey, Jon now travels the world helping people achieve new levels of performance. Jon’s focus is on achieving the balance of strength and flexibility.

Do you want to be the strong, tight guy that can’t flex his toes or tie his shoes, or do you want to be the emaciated yoga guru who has the strength of a jellyfish? You need to blend strength and flexibility to be functional and to really get your performance up there. That’s what we’re about – traveling all over the place to get that message to people. We’re getting results that are just out of this world. 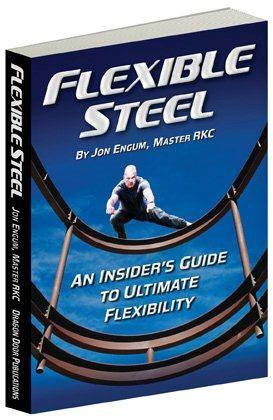 Jon also shares his knowledge in his new book, Flexible Steel. For a taste of the program you can try Jon’s four weeks of free workouts here on Breaking Muscle. Read his article, Untying the Four Knots, to get a deeper look at the philosophy behind the workouts.

More than anything, Jon’s philosophy is rooted in balance – balance of strength and flexibility, of hard work and fun, training and learning. Jon finds inspiration for this long-term approach to fitness and health in none other than Jack LaLanne. “I want to grow up like he did,” shared Jon. “I want to be extraordinary into my late ages, and that’s really motivating for me.” Jon shares LaLanne’s teaching with his clientele in another way:

And for many of us this learning means working on our weak spots. It’s not always fun, but mobility and flexibility tend to be a weakness for many athletes. The time we put in could directly pay off in our longevity and performance as athletes. Jon, as an athlete himself, understands the lure of wanting to work on the “fun” parts, but offered this bit of coaching: 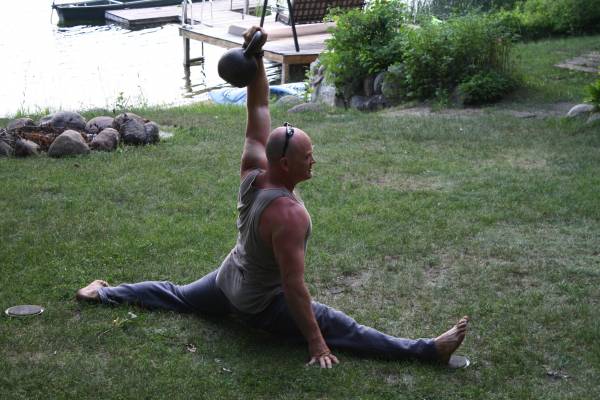 Everybody wants to work on his or her strengths, because strengths are cool and training should be fun and have some aspect of play. But a lot of people like to hide from their weaknesses. It’s just human nature. But you’re only as strong as your weakest link, so if you can make even small improvements in your weak link, your strongest areas are going to increase tenfold. It’s something that’s not easy to face and that’s not fun, but the results are. One thing I’ve learned is you really need to work on your weak links and train your weaknesses. Maintain your strengths, but train those weaknesses.

Click here to get started on your four weeks of free workouts with Jon.