Are Your Weak Neck Muscles Making Your Hamstrings Tight?

The neck is one part of the body’s deep core stabilizing system, and weakness can create problems down the chain. 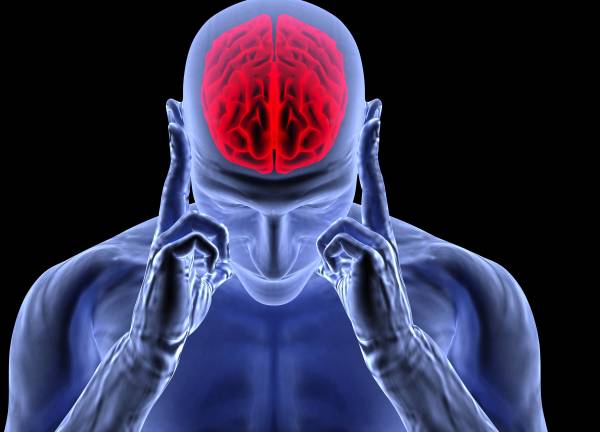 To generate power, you need mobility. To have mobility, you need stability. Proximal stability feeds distal mobility. Instability signals the brain and nervous system to put the brakes on power output because it feels threatened. A lack of stability is a threat to your nervous system.

The brain is in control of the gas pedal and it controls how much juice it puts into a muscle. It will inhibit (neural down regulate) one muscle in a pattern and facilitate (neural up regulate) another in an attempt to gain stability. It robs Peter to pay Paul.

The brain is a lazy piece of meat and it does not like to work hard. It cheats and takes the easy way out every chance it gets. When dysfunctional movement patterns exist, the brain will simply choose an easier alternate path to accomplishing a given task.

The Neck Is Connected to the Hamstrings

For example, if the deep core stabilizing system of your body is unstable, your nervous system will simply recruit more superficial power amplifiers to take over. One of the most common relationships is inhibition (weakness) of the deep neck flexors to facilitation (tightness) in the hamstrings.

“INSTABILITY SIGNALS THE BRAIN AND NERVOUS SYSTEM TO PUT THE BRAKES ON POWER OUTPUT BECAUSE IT FEELS THREATENED. A LACK OF STABILITY IS THREAT TO YOUR NERVOUS SYSTEM.”

Lack of stability in the neck causes a reflex compensation in the hamstrings to take over the job of the neck flexors. This relationship can commonly be seen in the standing to touch test.

In this test, feet are together and legs are straight with no knee bending. Look down at your toes (neck flexors) and then flex forward at the waist to touch your toes. If the neck flexors are inhibited the nervous system senses threat and instability, so on the way down to touch the toes it stiffens the hamstrings so you don’t fall forward hurting yourself.

So from this we learn that the key to power is not pressing harder on the gas pedal, but simply taking your foot off the brake. You will automatically go faster.

A Deeper Look at the Core

Let’s take a look at some of the structures in the deep core stabilizing system based on the work of Thomas Myers. 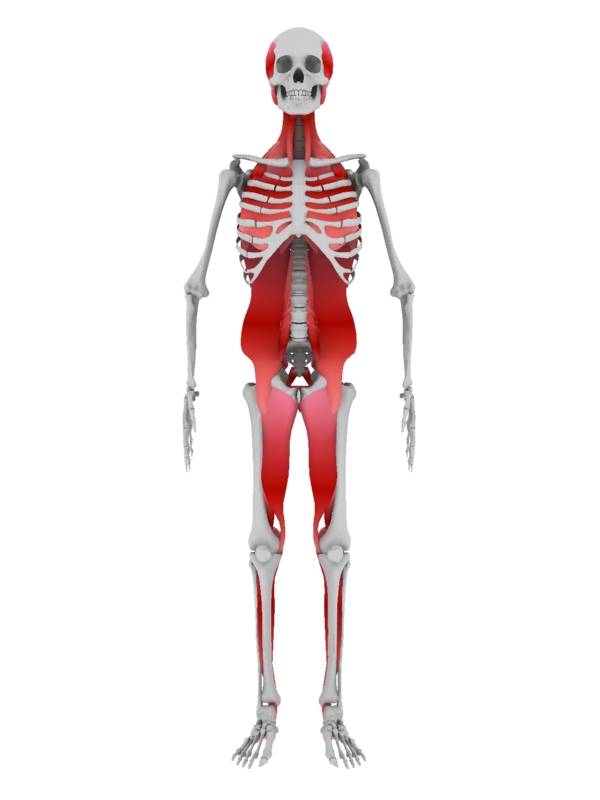 The deep core line (shown in red here) is the primary stabilizing system of the body.

According to Myers, the deep core line is the primary stabilizing system of the body. Dysfunction in this system leads to compensation patterns, energy leaks, and decreased force production and power output. It’s the master cylinder for your engine. Envision a car with an eight-cylinder engine only firing on four cylinders. It has the power capacity, but can’t unleash it. Athletes often try to get more power out of their engine rather than first ensuring all eight of their cylinders are firing.

“YOUR BODY WILL STEAL STABILITY FROM SOMEWHERE ELSE IN ORDER TO FEEL SAFE. IT WILL ROB YOU OF STRENGTH IN ONE PATTERN AND GIVE IT TO YOU IN ANOTHER. THAT’S CALLED A COMPENSATION.”

Do the first part of the video below with the thumb under the chin for ten seconds. Thumb placement ensures you are not using too much of your other neck flexors like the anterior scalene and sternocleidomastoid.

Do you feel fatigue, soreness, discomfort, shaking, or the need to hold your breath during this exercise? If so that indicates the muscle may be inhibited and needs activation. The key is to activate the neck flexors after releasing areas of your body that have been prone to tightness and stiffness.

Let’s walk through what to do if your problem area is your hamstrings. First, do a toe-touch test and see if your hamstrings feel tight and if you can’t reach the toes with your fingers. Foam roll the hamstrings for 30-45 seconds. Then lie on your back and do the neck activation drill in the video.

Stand and repeat the toe-touch test. Did you get further? Did you feel more stable getting there? Apply this reset to any other muscle where you feel tightness. Common culprits are the thigh adductors and quadratus lumborum.

Your body will steal stability from somewhere else in order to feel safe. It will rob you of strength in one pattern and give it to you in another. That’s called a compensation. Tap into the power of your nervous system to unleash power. Regress to progress.

To become a badass you don’t always have to go stronger, harder, faster, and longer. Pull back on the throttle to expand your comfort zone in movement and your body will grant you the strength.