This week was a recovery week. I also got my VO2 max tested, which was an intense but cool experience. The results were great and gave me a nice confidence boost for the Ironman race in 8 weeks. 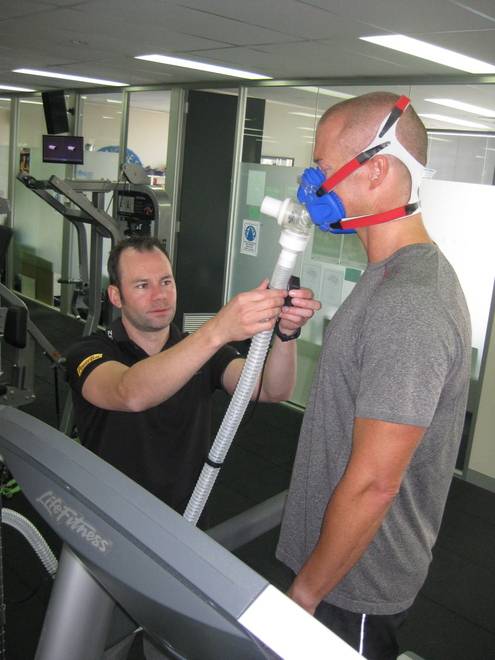 There is a big difference between a rest week and a recovery week. Rest, to me, is fully off training, feet up and pretty much doing nothing physical beyond digesting food, with sleep playing a major part in how I spend my time. Recovery is about fifty to seventy percent of what a normal week might be in terms of training volume but with much reduced intensity too.

My first two days of training for the week are actually quite mild – very short sessions in the pool and on the bike. Both of these sessions are high intensity but very short and help to work different kinds of energy systems than the long stuff done on weekends like the five hour rides. But the rest of the week was easy and short. I even had a whole day off training thrown in!

I did make one change to the format though and that was to substitute an easy run for a very short, hard run in a lab. I’d always wanted to get my VO2 tested and found this place called Bodyology close by. These guys run all kinds of tests from VO2 and body fat on a lot of top sports teams here in Australia so they seemed a good choice. I organized an appointment a few weeks ago for this week, knowing it wouldn’t interfere with a normal training week.

We started off with a body fat test done in the Bodpod. This is about as simple as any test could be – strip down, sit still inside a little egg thing and a few minutes later find out whether you’re an elephant or a cheetah. I’ve been the subject of more caliper skin fold tests than I can count as I used to teach that as part of a course I ran and would often end up as a subject for one of the students. But there is some inherent inaccuracy in calliper testing and novice testers are not always that accurate. The Bodpod is far more accurate and has no human error with use.

Next came the part that I was really keen on, as well as slightly apprehensive about. The only way to test your maximum oxygen consumption is basically run you until you can’t go anymore. Not a test to exhaustion but as hard as you can. Just before the test we spoke about what my maximum running speed, which would give the tester an idea of where I might peak during the test. This allows the test to actually be reasonably short – the whole thing only took about nine minutes.

I warmed up for about ten minutes or so to loosen up and get my body breathing freely including some time running close to my limit pace so I was ready for when we got to it. Then we began. 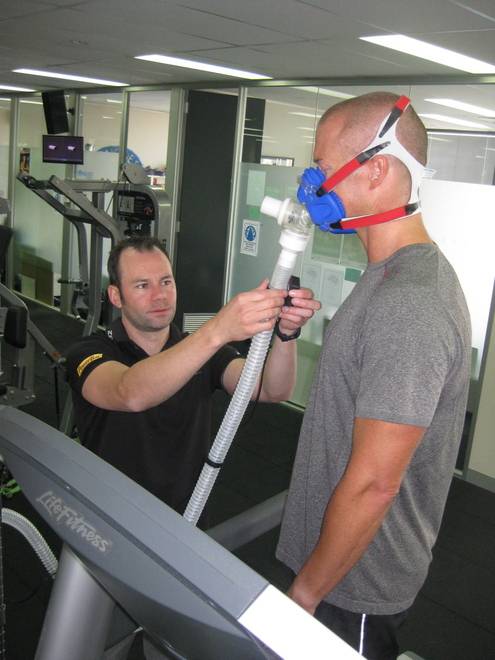 The test measures how much oxygen you are able to use at your maximum. The short version is that the higher the number the faster you should be able to go. To test this they place a gas mask on you. So that’s a little weird. The mask sits on the bridge of your nose, which makes getting a good breath in through your nose hard – especially for me, since I pretty much always breathe in through my nose except for when right at my limit. There is a hose right in front of your mouth that the CO2 travels out through. The hose adds some weight to the front of the apparatus so it changes your feel for your posture a little as well. Breathing out becomes a little harder too – like if you snorkel and come up from underwater and have to blow really hard to clear the air tube. I found I had to exhale really hard to make sure there was space in the mask to get a clean breath of air in. If you don’t know how to breathe properly using your diaphragm you’ll struggle with this test, as you’ll wear yourself out just breathing before you even start running.

The test begins easily with just standing still and getting some baseline measurements. Then a gentle walk that builds into an easy jog. From there it ramps up faster and faster incrementally and also gets steeper. From a walk of 4.8km/h on flat I ended up at 14.5km/h on a 5 percent gradient.

The test itself is not so bad, except for the last two minutes or so. At that point you’re above that comfortably uncomfortable pace and it’s getting hard. The pace is almost your maximum. The final minute is awful. At that point you’re no longer able to get in enough oxygen to cope with your demands as your body is filled with so much carbon dioxide there’s just no room to fit it in – you are one hundred percent anaerobic at this point. Imagine trying to run up a steep hill as fast as you can while holding your breath – that’s what it feels like. 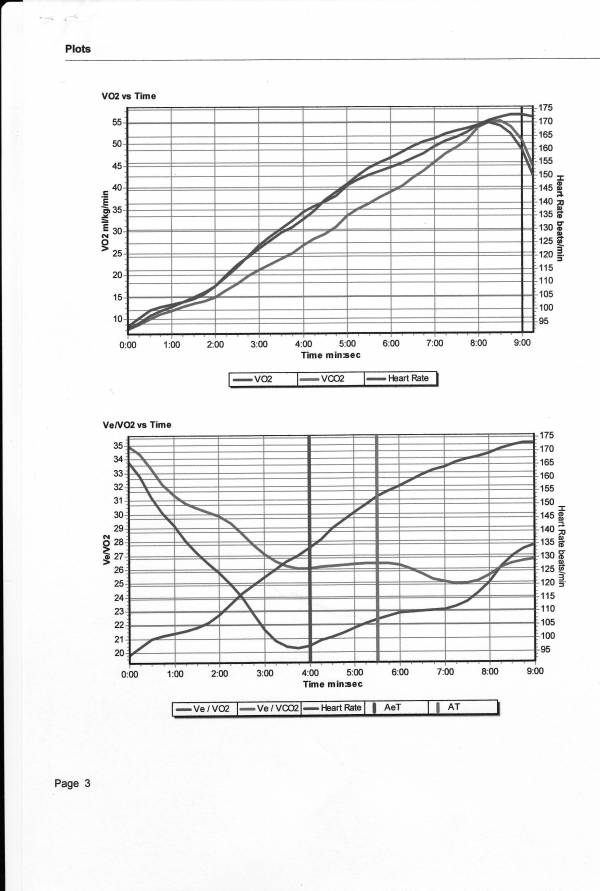 My VO2 is 56.7. That result puts me in the highest category (which begins at 48) for my age. In fact, it puts me in the highest category for any age group. What is interesting is if you look at the graph of the test you’ll see that at about the eight minute mark, while my heart rate keeps climbing for the last minute (up to 176bpm, showing that the old 220 minus your age formula isn’t so wrong after all, as that would make mine 179bpm), my oxygen intake is actually heading backwards.

A quick check on this table will show the elite values for many sports. While the real guns of the endurance world – the runners, cyclists, rowers and cross country skiers – have values that start beyond mine, I am doing pretty well for an older amateur compared to other elite sports.

My body fat was about the same, coming in at 13.9%. While that may seem high the range for elite sports is 9-14%. The boffins at Bodyology explained that beyond competitive body building being right down into single figures is actually a performance detriment, which often comes with being plagued by injury and sickness. They told me that my body fat percentage is in line with professional AFL players here half my age – that made me feel pretty good! However, they also pointed out that if I stopped eating family sized Kit Kats five times per week, I’d drop another couple of points, which would make the Ironman marathon a bit easier.

Overall, I really enjoyed the experience to feel like a professional athlete for a little while and have people prod and poke at me. I liked it even more when the results showed that I have a heart and lungs that is on par with elite athletes (just a shame about the hand eye coordination, speed, skill and all the other things that go into a champion athlete). The thing that really did stand out was that my lactate threshold is high – about 87% of my maximum heart rate. This explains why I’ve always been good at those things that take about five to ten minutes to do like martial arts competition. The breakdown of my heart rates also gave me some ideas about how many calories I will need to sustain both an all day aerobic effort as well as periods of anaerobic work and I’ve got some work to do there.

Next week the real hard work starts, with eight weeks to go until Ironman Melbourne. The coming weeks are filled with massive sessions and long hours, but I am pretty sure that my body is now handling the training and absorbing it and I think my injury concerns are behind me. Onwards to Ironman!