The following exercise goes by a number of names including “holding at arm’s length,” “holdouts,” and “the crucifix.

The following exercise goes by a number of names including “holding at arm’s length,” “holdouts,” and, for one version in particular, “the crucifix.” Regardless of the name, this exercise was commonly used as a test of strength in the golden era of the old-time strongmen, but it has since largely fallen out of favor.

One way to hold the kettlebells is to grasp the handle with your palms facing up.

In its place we still see different shoulder raises – front, lateral and side – that are common in commercial gyms. The main difference is that those are isotonic exercises, while holdouts are isometric.

But the truth is that when it comes to shoulder strength, few things demonstrate it in the same way as this exercise and its variations because of the difficult leverage involved. So, I’m going to explain the movement and how you can vary it to fit your goals and equipment.

As the various names indicate, the exercise involves holding a weight with an outstretched arm. It is not just a test of strength, but can also be used as a regular training exercise. Since the affected area may be a weak point when you attempt other exercises, strengthening it in this way can allow you to develop very strong shoulders.

Also realise that these exercises challenge your shoulders in a different way than in any press, thus if you only press to get stronger arms and shoulders, you’re missing part of the picture.

But before we get to the exercises themselves, it’s important to cover a few foundational points that define the variations: 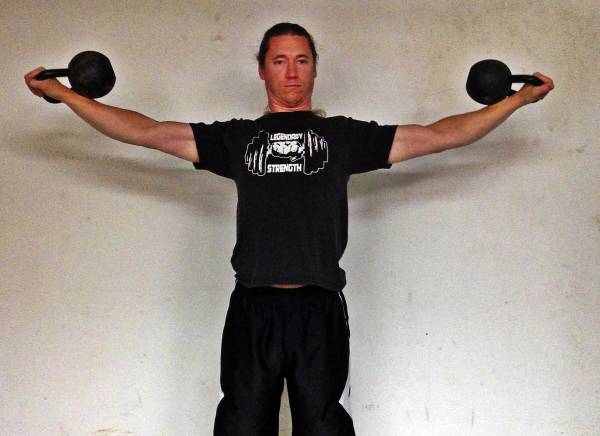 You can also allow the weight of the kettlebell to rest on your wrist and arm.

You can usually do a bit more weight out to the front because you can lean back. This lean should be minimized, but some is allowed. This will give you slightly better leverage in the exercise.

Holding the two arms out to the side is often referred to as the crucifix exercise. When doing this, you may find you lean back slightly as well or that you arch your chest, bringing the sternum up. I believe happens in order to bring the chest into play for extra support.

“Because you’re working with the small muscles of the shoulders and at a bad leverage, you need to start light. Even then, it is not recommended to do this exercise for extended periods of time.”

With a light weight you can most likely get your arms completely locked out. When working with anything a heavier, it is common to have a slight kink in the arms, but nothing more than that should be accepted.

I find it easiest to get the weights into place for the hold by lowering from the top down. There are other options, though. You can muscle out the weight straight or even raise it up from the arms hanging at your sides.

You can also use different tools for these exercises. Dumbbells are the most commonly used. They are particularly useful because you’ll want to make small incremental adjustments in weights to progress. Kettlebells can also be used, but unless you have a wide variety of kettlebell weights, or loadable ones, this will prove difficult.

“Dumbbells are the most commonly used. They are particularly useful because you’ll want to make small incremental adjustments in weights to progress.”

There is one other option unique to the kettlebell. Start with the weight overhead and lower your arms with the mass of the kettlebell resting on the back of your wrist and forearm. Here the weight is not in as bad of a leverage position and you’ll be able to handle more weight. This can be a useful stepping-stone in working from one weight to the next.

One other alternative is to hold the kettlebells from the bottom, instead of the handle, on the open palm of your hand.

Another option – hold the kettlebells with your palms face down.

Because you’re working with the small muscles of the shoulders and at a bad leverage, you need to start light. Even then, it is not recommended to do this exercise for extended periods of time. At most I would recommend holds of thirty seconds. Typically I work in the three- to eight-second range. Sometimes I just try to get a brief one-second hold after lowering the weights into place, and do many sets of this.

As you can see there are many variations on this exercise. Between front and sides, single or double, and all the possible hand positions, you have a lot to play with. And each of these focuses more or less on different muscles in the shoulder girdle. You can focus on one variation per workout, or you could try several different ones for a single set each.

Give it a shot and let me know how it goes. Post your experiences or questions to the comments below.