There is a misconception that athletes want a challenging and power-based yoga practice. I always ask my athletes what they need and it is always a unanimous response of stretching and meditation.

For the last couple weeks, I’ve had the honor of teaching the U.S. women’s soccer team during their training camp. It is the third year I’ve worked with them, and what amazes me is how similar all athletes are when I work with them. I have also taught yoga to the U.S. women’s indoor volleyball team, the U.S. men’s and women’s sprint cycling teams, and several professional beach volleyball players. In my public yoga classes, NFL and NHL players often come to the mat during the off-season. These athletes play different sports and have different body types, but their needs and requests are similar.

There is a misconception that athletes want a challenging and power-based yoga practice. While this is often true during the off-season (as I see with the professional football and hockey players who attend my power yoga classes in the spring and summer), when athletes are training or in-season their bodies are challenged to the limit during practice, weight lifting, and competitions or games. I always ask my athlete class members what they need before every yoga session and it is always a unanimous response of stretching and meditation.

Integrating Yoga Into an Athlete’s Training

When athletes are doing yoga prior to practice or training, then dynamic stretching is important to warm the body up. Dynamic movements such as the classical sun salutations are great for warming up the entire body. When yoga is scheduled immediately after practice, then static stretching is appropriate since the body is already warm. Relaxation pose, also called corpse pose (or savasana in Sanskrit), is an essential way to end the yoga session. During savasana is the perfect time for visualization and deep muscle relaxation.

For athletes, most training regimens include strength training, agility, power, and cardio (depending on the sport). Flexibility training and yoga is often minimized or skipped all together. So, to do more of a power yoga session when athletes are in training camp or in season is really doing them a disservice. Their muscles need to recover and lengthen rather than be engaged in strengthening poses. I often see a bit of grimacing while my athletes are doing their stretches, but at the end of the session they always feel better as their muscles have lengthened. 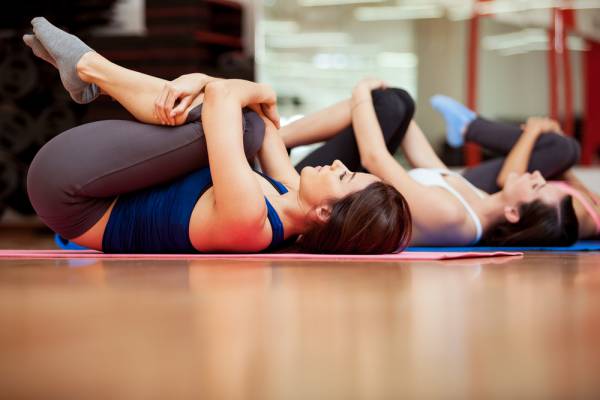 Yoga is also important for injury prevention. When I hear about athletes with groin, hamstring, or Achilles tendon injuries, I always wonder if it could’ve been prevented with a consistent yoga practice. Of course, there are some injuries such as ACL tears and concussions that yoga won’t prevent. But the hips, hamstrings, and calf muscles, and in some sports the shoulders, are taxed heavily during training and repetitive movement. Without stretching and lengthening these muscle groups, injuries are bound to occur over time.

How You, the Athlete, Can Incorporate Yoga

Yoga is becoming more popular amongst professional and Olympic athletes, but not all coaches are on board yet. In some cases it is due to time constraints and in other cases the coaches simply choose to stick with what they know and aren’t willing to try something new. If that is the case in your sport, then try adding the following poses on your own after training.

These poses will open up the hips, quads, hamstrings, and lower back. I recommend doing these poses after training or games when the muscles have been worked and need to lengthen and recover. While practicing these poses, breathe deeply and slowly in and out, through the nose if possible.

1. Lie on your back, hug the knees into the chest, and rock side to side.

2. Bring the arms out like a T, and as you exhale, lower the knees off to the right. The head can stay centered or gaze to the left. Hold for ten breaths and switch sides. 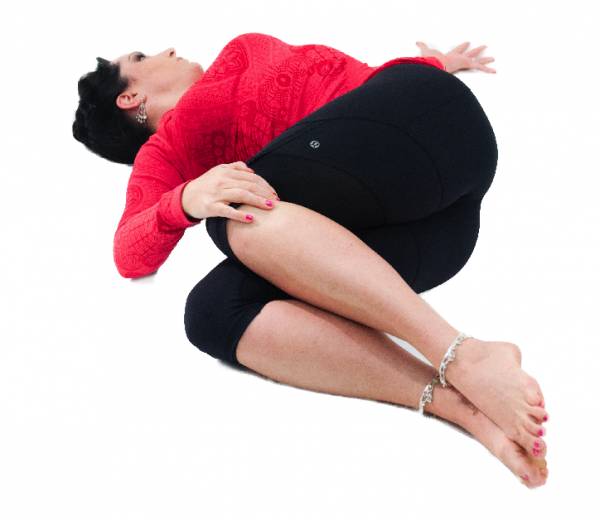 3. Hug the right knee into the chest for a few breaths. The left leg can be bent with the foot on the ground or extended out along the ground. Eventually straighten the right leg into the air with the hands interlaced around the right back of the thigh. Or if you have a strap, place it on the ball of the right foot. After twenty breaths, then switch legs.

4. Roll over onto your belly. Prop your chest up in sphinx pose with the elbows under the shoulders and the forearms flat on the ground. Reach back with your right hand and grab the outer edge of the right foot gently pulling it towards your butt. Keep the knee directly behind the hip. Hold for fifteen breaths and then switch sides.

5. Come up to all fours (hands and knees). Bring your right knee forward for pigeon pose with the right knee just a bit wider than the right hip and the right foot at an angle toward the left hip. Extend the left leg out behind you. Hold for twenty breaths and then switch sides. 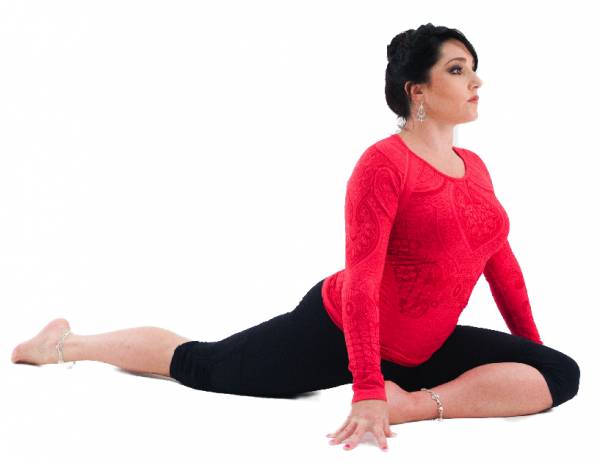 6. Lie on your back with the soles of the feet in a butterfly position. The arms can rest alongside the body or above the head in a goal post shape. Hold for twenty breaths.

7. Straighten the legs out and rest your arms along side your body with the palms facing up in corpse pose (savasana). Use this time to visualize a specific area of your sport you want to perfect or visualize your biggest goal or intention that you have already manifested.

Give yourself six weeks to really absorb the benefits of adding yoga to your routine. Warning: You may become addicted!